Trump order will be hard to overturn — legal experts 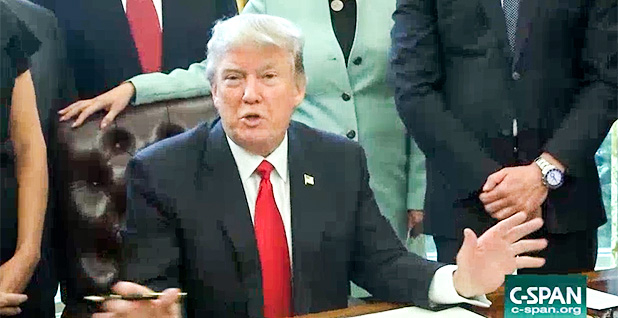 A lawsuit challenging President Trump’s executive order requiring federal agencies to scrap two regulations for every new one created may face an uphill road in the courts, say legal experts.

Yesterday, environmental and public interest groups charged in a federal complaint that both the order and an associated guidance document are unconstitutional.

The groups also argued that agencies cannot comply with the order without taking arbitrary action or breaking the laws under which they operate.

The suit raises "substantive, very serious questions," said Cary Coglianese, director of the Penn Program on Regulation at the University of Pennsylvania Law School, in an interview.

Still, it has one initial hurdle to overcome. The U.S. District Court for the District of Columbia, where groups filed the case, may rule that the order isn’t ripe for review because agencies have yet to take concrete actions in response to the order, Coglianese said.

"The substantive and underlying questions are serious and ones in which, if they were to arise in a manner that the court would entertain, I think they’re very strong arguments," he said. "The biggest weakness in the lawsuit is whether it is something that the court will determine to be premature."

The complaint, though, is likely only the first of many to stem from the Trump administration’s deregulatory effort, said Scott Fulton, president of the Environmental Law Institute and former general counsel at U.S. EPA.

"I think this case is a harbinger of things to come," he said this morning at an annual American Law Institute event in Washington.

Beyond requiring agencies to scrap two rules for every new one, the January order established a regulatory budget by which the president determines how much agencies can spend on new rules each year. The budget for 2017 is zero dollars, meaning agencies must offset any new standards by repealing old ones.

Hours later, White House spokesman Sean Spicer slammed the lawsuit as speculative. "It makes a ton of assumptions that call for speculation on what may or may not happen in the future," he said. "It’s just subjective at best and doesn’t have any basis in fact."

Environmentalists argue the order is illegal on its face, regardless of whether any agency has yet pulled or delayed rules in response.

"A court doesn’t have to wait to see how it will play out but can see from the face of the action that it’s illegal," said Peter Lehner, an attorney with Earthjustice who is representing environmentalists in the suit. "And in this case, we have a pretty strong argument that this is illegal."

The order is already having a "tremendous chilling effect" on the ability of agencies to issue rules that are vital for environmental and public health, he said.

"This is not just a paperwork exercise," Lehner said. "This is going to have real human consequences."

Plaintiffs say the order violates the separation of powers in the Constitution because it is an attempt by the president to override laws passed by Congress.

That includes environmental laws that contain mandatory deadlines to enact certain regulations or instructions about weighing costs and benefits.

By only requiring agencies to consider cost — and not benefits — the order would "effectively amend" many statutes without going through the legislative process, Lehner said.

"It is the president’s job to execute the laws, but Congress writes the laws," he said. "The breadth of this order makes it almost impossible for agencies to do what Congress intended."

But Trump’s order contains a boilerplate provision similar to other executive orders that says agencies should follow it "to the extent permitted by law."

"My basic concern is that the EO, by its terms, only applies to the extent that is permitted by law, so there is really no room to claim that it somehow violates the statutory obligations of individual agencies," said Jonathan Adler, a professor at Case Western Reserve University School of Law, in an email. "I also don’t think the OMB guidance is a final agency action subject to suit."

The language in the order gives the Justice Department an opportunity to claim that the suit is premature because it’s aimed only at discretionary provisions, Penn’s Coglianese said.

"The president’s not asking for either the holding up of any rulemaking that has any kind of statutory mandate," he said, "nor is the president, if you rely on the boilerplate language, saying that the rules to be repealed are ones that aren’t within the discretion of the agency to repeal."

Robert Percival, director of the University of Maryland’s Environmental Law Program, said the Justice Department would likely argue that the president has the authority to guide agencies in implementing laws in the way that he sees fit.

"Until you actually have a specific action that’s contrary to law, it’s hard for those issues to be litigated," he said.

Percival contrasted the suit to one that successfully challenged U.S. EPA’s rulemaking to abolish lead limits in gasoline during the Reagan administration, which came about after the president issued an executive order mandating that agencies perform cost-benefit analyses of any mandates likely to cost more than $100 million a year.

Because the Reagan administration said costs and benefits don’t have to be weighed when an agency proposes to repeal a regulation, EPA did not take into account the benefits of phasing out lead from gasoline.

"There we had a concrete action that had happened," Percival said.

The litigation over Trump’s executive order on immigration and refugees similarly challenges specific actions taken by customs officials to halt certain people from entering the country.

To be sure, the court does have some latitude to decide when litigation is ripe for review.

Since it’s clear that organizations are prepared to sue over individual regulations that have been either eliminated or delayed because of the executive over, Coglianese said the court may think it’s expedient to take up the order now.

"There’s an argument that it would be economical from the standpoint of judicial economy to hear this claim at this time," he said.

Fulton of the Environmental Law Institute said it would be "very difficult" for EPA to meet the goals of the executive order.

There’s a "significant question of how much antiquated or useless driftwood there is to be harvested" from the globe of environmental regulations, he said.

Complying with the order will also likely be a "big workload" that takes away from EPA’s ability to stay on top of regulatory activity required by law.

DOJ won’t be able to turn to the executive order as a defense in those types of lawsuits, he said.

"If this administration has the same lack of success in prior administrations in getting further forbearance from courts on missed deadlines," Fulton said, "look for additional consent decrees despite the concern about the so-called sue-and-settle phenomenon."