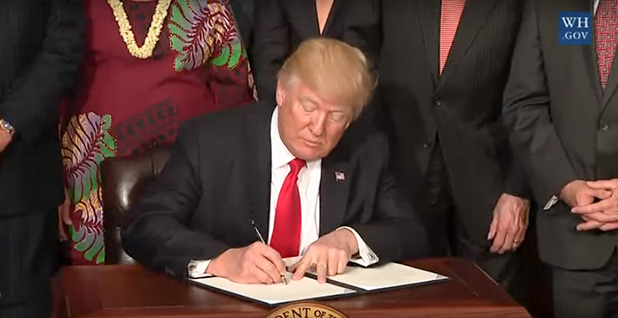 President Trump signed an executive order on the Antiquities Act at the Interior Department's headquarters today. Photo courtesy of the White House.

President Trump today vowed to end the "abusive practice" of establishing national monuments under the Antiquities Act, signing an executive order that will require the Interior Department to review the boundaries of dozens of sites designated within the last two decades.

As anticipated, Trump’s executive order will mandate Interior Secretary Ryan Zinke to lead a review of monuments created since 1996 that comprise at least 100,000 acres.

The review, which will include an initial report focused exclusively on Bears Ears National Monument in Utah within 45 days, will ultimately recommend whether the president should rescind, resize or modify the management of about 30 monuments. A final report is due within 120 days.

"It’s time we ended this abusive practice," Trump said during a signing ceremony at the Interior Department today. Although the president may only designate existing federal lands for monument status, Trump added that he is "gravely concerned about this massive federal land grab."

Utah state and congressional Republican lawmakers have actively pushed Trump to address the 1.35-million-acre Bears Ears monument, which President Obama designated in his final weeks in office. Republicans in the state had lobbied against the monument status, arguing instead in favor of a legislative designation known as the Utah Public Lands Initiative.

"The previous administration used a 100-year-old law known as the Antiquities Act to unilaterally put millions of acres of land and water under strict federal control … eliminating the ability of the people who actually live in those states to actually decide how best to use that land," Trump said.

Trump, who was joined by officials including Utah Gov. Gary Herbert (R), credited Utah GOP Sens. Orrin Hatch and Mike Lee for urging him to sign the executive order with their "never-ending prodding."

During introductory remarks, Zinke vowed that the executive order would not eliminate any monument designations or weaken environmental protections, even as he criticized unspecified monument designations for placing lands "off limits to public access for grazing, fishing, mining, multiple use and even outdoor recreation."

The former Montana lawmaker also emphasized in his remarks that the monuments should conform to the "smallest area" possible, suggesting the final review could aim to slash the size of numerous sites.

"Despite this clear directive, ‘smallest area’ has often become the exception rather than the rule," Zinke said.

Despite Zinke’s vow that the executive order will not immediately remove any monument designations, conservationists warned that the review is a thinly veiled "giveaway" to fossil fuel producers.

"The clear but unstated goal of Trump’s executive order is to remove existing protections on Americans’ public lands by shrinking monument boundaries," said Chris Krupp of WildEarth Guardians. "The order is a gift to the coal, oil and gas industries, who will quickly start looking at digging and drilling on public lands that will no longer be protected after boundaries are redrawn."

Similarly, National Wildlife Federation President and CEO Collin O’Mara warned that the review will amount to "a death-by-a-thousands-cut approach" to monument sites.

"The very things that make places like Bears Ears, Rio Grande del Norte, Papahānaumokuākea and Browns Canyon so special could be in jeopardy if important fish and wildlife habitat, archaeological treasures and waterways are carved out of the monuments and left unprotected," O’Mara said.

Proponents of federal land protections also disputed Zinke’s assertions that recent designations under the Antiquities Act have failed to take into account input from local officials and communities.

"Eliminating or shrinking the 55 national monuments designated during the last 21 years would short-circuit the will of local residents, hunters, anglers, business owners and recreationists who campaigned, in some cases for decades, for these monument designations," O’Mara said.

Former Interior Secretary Sally Jewell expressed confidence in an interview with The Salt Lake Tribune yesterday that the Trump administration’s review would have difficulty undoing the Bears Ears designation in particular.

"I am very confident our work will stand the test of time," she said, and later added: "There is no question in my mind that the land that was set aside for these monuments was legitimate and appropriate in the spirit of the Antiquities Act. It’s fair to say, as we have learned more about habitat and the importance of connected habitat and landscapes more broadly. The area needed to protect these resources has also expanded."

Jewell also slammed suggestions from Bishop and others that the Obama administration had not kept lawmakers informed about its decision to designate the monument in late December.

"Every member of [Utah’s] delegation and governor’s office knew for years we would use the Antiquities Act by the end of the Obama administration if they were not successful getting legislation passed. None of this was a surprise," Jewell said.

Advocates of reducing the federal estate including the American Lands Council praised the new executive order, asserting it serves as a "double-check on past, present, and future presidential authority."

"The increasingly massive acreages that have been unilaterally placed under ‘national monument’ designations calls attention to the need to restore a sensible process for protecting important cultural resources while preventing abuse of power," said ALC CEO Jennifer Fielder, who is also a Montana state senator. "We applaud President Trump for recognizing the importance of applying the Antiquities Act appropriately and taking steps to stop it from being used as a tool to threaten Western states and arbitrarily lock the public out of millions of acres of our public lands."

It remains to be seen whether Trump will attempt to ultimately reduce the boundaries of monuments himself — as past presidents have done — or look to Congress to address changes via legislation.

While Congress itself can act to eliminate a monument, it has done so fewer than a dozen times since the law’s creation in 1906, more often opting to convert areas to national parks.

But conservationists said any effort by Trump to take executive action will result in likely legal challenges.

While former presidents have diminished the size of monuments, including major reductions to the former Mount Olympus National Monument in Washington state and the Grand Canyon II National Monument, none of those decisions faced litigation. No president has attempted to reduce the size of a monument since President Kennedy in 1963.

"This review is a first step toward monument rollbacks, which we will fight all the way. The president does not have the authority to reverse monument designations, and the public supports protection of public lands," said Natural Resources Defense Council President Rhea Suh.

Earthjustice attorney Heidi McIntosh likewise suggested a "huge battle" should the Trump administration ultimately attempt to roll back any monument boundaries or designations.

She also asserted that "it’s pretty clear [Trump] doesn’t understand the Antiquities Act, its purpose or the case law that supports its use for large monuments."

Zinke in previewing the executive order last night acknowledged it remains unclear whether the administration has the legal authority to rescind monuments. "I’m not scared of getting sued," he said (Greenwire, April 25).

"How successful we all may be on this is going to rest, I think, with the secretary," said the top Democrat on the Natural Resources Federal Lands Subcommittee. Hanabusa, who did not serve with Zinke when he was in Congress, said that the Democrats she has talked to "have positive feelings about him," adding that, "if people feel you can be fair and do that analysis, that’s the most critical part. And that’s what I’ve heard about the secretary."

Hanabusa said she also expects Zinke to come before the committee soon to discuss the review.

But Arizona Rep. Raúl Grijalva, the top Democrat on the Natural Resources Committee, asserted that the review process would likely only prove the popularity of public lands.

"Attempting to wipe national monuments off the map with the stroke of a pen would be illegal and unpopular, and this review will show as much," he said. "If done in good faith, this review will lead President Trump and Secretary Zinke to see these wonderful places as the American people see them: as sources of national pride and engines for local economic development."