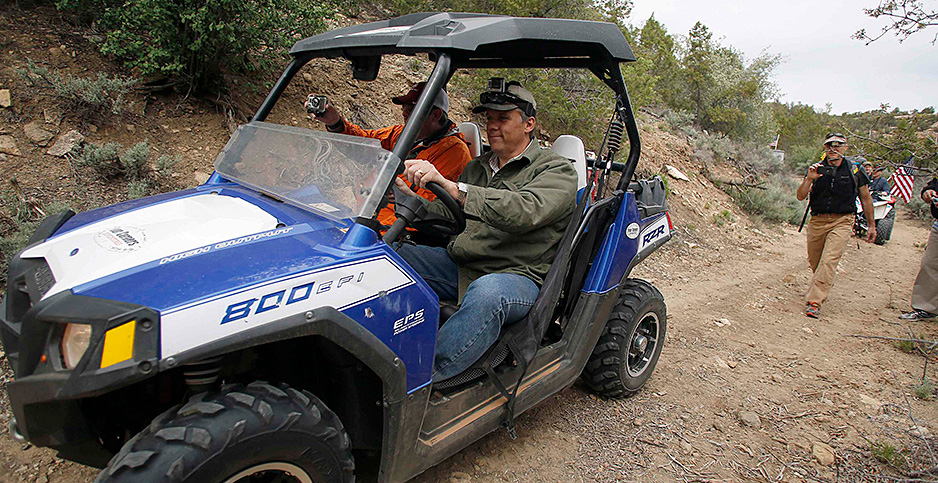 Utah state Rep. Phil Lyman, then a county commissioner, drives his all-terrain vehicle in Recapture Canyon outside Blanding, Utah, in this May 10, 2014, photo. Lyman faced criminal charges for the protest ride but was pardoned last night by President Trump. Jim Urquhart//REUTERS/Newscom

An outspoken critic of federal land managers, Lyman praised Trump in a statement posted to Facebook. He also used the platform to slam "persistent federal attacks on rural Utah by the Bureau of Land Management."

"The false narratives of the media have been so damaging, not only to me but to the truth," Lyman wrote. "We protested a federal agency that wrongly and maliciously raided our community."

In 2015, a federal jury convicted Lyman, then a San Juan County commissioner, for misdemeanor illegal use of ATVs and conspiracy for organizing a 50-vehicle ride through closed BLM areas (E&E News PM, Dec. 18, 2015).

Lyman organized the ride to protest the closure of Recapture Canyon to motorized vehicles, a decision made to protect nearby archaeological sites including Native American cliff dwellings.

Utah Sen. Mike Lee (R), who is also a detractor of public lands management, praised Lyman as a "devoted public servant" in a statement on Twitter last night. Lyman won election to a state House seat in 2018 and was reelected to a second term last month.

"I thank President Trump for correcting the injustice stemming from this overreach of federal power," Lee wrote. According to the White House, Lee supported Lyman’s pardon, along with former House Rep. Jason Chaffetz (R).

In a statement detailing the pardon, Trump likewise called Lyman "a man of integrity and character" who was "subjected to selective prosecution" by the Obama administration.

Lyman filed a lawsuit against BLM in 2019, seeking $10 million in damages for alleged harm to his reputation, business and political relationships (Greenwire, Nov. 13, 2019).

But records in the U.S. District Court for the District of Utah show Lyman failed to notify the federal government about the lawsuit, resulting in the case’s dismissal in March.

Lyman received one of the 15 pardons Trump issued last night. The president also commuted the sentences of five other individuals.

Trump also pardoned former campaign adviser and energy consultant George Papadopoulos, who pleaded guilty to perjury after lying to federal investigators about his contacts with Russia during the 2016 campaign (Greenwire, Oct. 30, 2017).