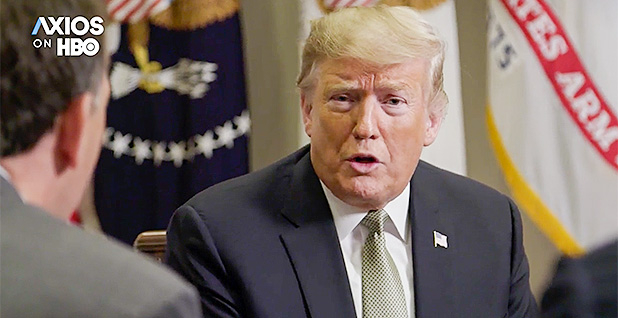 President Trump questioned his administration's scientists in an interview broadcast last night on "Axios on HBO." "Axios on HBO"

President Trump dismissed the National Climate Assessment that shows humans are driving climate change, and said he was focused on the reports that dispute it.

Jim VandeHei of Axios showed Trump a copy of the assessment, which was developed by his administration, and said the language identifies humans as the source of global warming. The interview was conducted in the White House by VandeHei and reporter Jonathan Swan for the debut "Axios on HBO" show.

Trump repeated a popular talking point among conservatives, acknowledging that humans contribute in some way to global warming, without accepting mainstream climate science that says consumption of fossil fuels is responsible for warming the planet.

Trump then repeated a talking point he first used several weeks ago. The president claimed that climate change will "go back" on its own. Scientists dispute that characterization.

"Is there climate change? Yeah. Will it go back like this, I mean, will it change? Probably, that’s what I think," Trump said as he waved his right hand. "I believe it goes this way, and I believe man, meaning us people — man and women, to be politically correct, because everyone says man, but now we have to add women to that one, too — man and women, we do have an impact, but I don’t believe the impact is nearly what some say, and other scientists that dispute those findings very strongly."

Scientists have known since the 19th century that rising levels of carbon dioxide can cause the planet to warm. The world’s major science agencies, including NASA and NOAA, determined long ago that the planet is warming at an unprecedented pace. There are a small number of scientists who claim humans are not driving climate change, and many of them are allied with conservative think tanks opposed to regulations.

E&E News reported recently that senior administration officials had sought a PowerPoint presentation on climate change from the Heartland Institute, a conservative think tank that works to cloud the findings of scientists. The group largely relies on the work of researchers who aren’t climate scientists or who are funded by the energy industry.

Trump said he was focused on those types of scientists.

"I want everybody to report whatever they want, but ultimately, I’m the one that makes that final decision," Trump said. "I can also give you reports where people very much dispute that, you know, you do have scientists that very much dispute it. I want to make sure that we have the cleanest air."