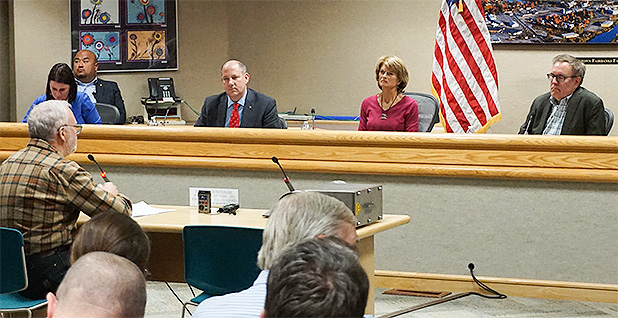 After nearly an hour of testimony on the city’s long-standing dispute over meeting federal air quality standards for particulate matter, Sen. Dan Sullivan (R-Alaska) announced the meeting would recess so Wheeler could take the call from the White House.

When the hearing reconvened about 30 minutes later, Sullivan said Trump "was talking about what a great state Alaska is," prompting laughter in the room.

"He was," Wheeler said. "And he told me to make sure I say hello to both of you and all of the people here today."

That prompted a brief round of applause in the room, egged on by Sen. Lisa Murkowski (R-Alaska), who also attended the event. "Let’s hear it, come on," she said.

Trump did not come up again during the meeting. But as Wheeler waited for a press conference to begin after the event, he said he expected the White House to call again within minutes. An EPA spokesman said the agency does not comment on conversations with the president.

‘Everybody working together’ in soot fight

Following the president’s odd interlude, Wheeler, Sullivan and Murkowski continued to hear testimony on Fairbanks’ struggle to clean up particulate matter, a fight complicated by the widespread use of wood stoves to heat homes during the frigid winters.

Sullivan said he and Murkowski invited Wheeler and state and local officials to hear about solutions that would limit economic impacts while cleaning up the region’s air, which is among the dirtiest in the nation during winter.

"The balance there is really important," Sullivan said. "This is a classic example of where the solution has to come from federal, state, borough, local — everybody working together — and that’s what we want him to see."

Wheeler echoed the point, noting the Trump administration’s belief that "environmental progress is best achieved when we work closely with the states to advance sound environmental policies."

"Each state has unique geographic factors and needs, and Alaska probably has the most of them," he said. "A one-size-fits-all rule from Washington, D.C., does not distinguish between the needs of remote fishing villages in Alaska to the suburbs of Virginia. One-size-fits-all just does not work."

It’s unusual for the head of EPA to dive into the details of a local air pollution cleanup plan. In another sign of high-level attention from the agency, acting air chief Anne Idsal held a video teleconference last month with other staff over the issue, according to her daily work calendar obtained last week by E&E News through an open records act request.

Wheeler’s appearance at the event, which Sullivan said was months in the making but was only announced Friday, comes as the state faces a rare federal takeover of soot standards enforcement in Fairbanks.

Also known as soot, PM2.5 is fine particulate matter that is no more than 2.5 micrometers in diameter, or about one-thirtieth the width of a human hair. It is linked to a host of heart and lung problems, including increased risk of early death in some cases. The 24-hour standard for PM2.5, set in 2006, is 35 micrograms per cubic meter of air.

Under a proposed consent decree made public in June, EPA would have had to formally determine by July 8 whether Alaska had made an "administratively complete" update to a cleanup plan for the Fairbanks area after federal regulators downgraded its nonattainment status for the 24-hour standard from "moderate" to "serious" (E&E News PM, June 4).

The tentative settlement came in response to a lawsuit brought by environmental groups aimed at prodding EPA to act. It has yet to be made final after the state of Alaska successfully moved last month to intervene in the litigation. The state has been working diligently on the updated cleanup plan, its lawyers said in the motion, but they underscored the "critical" importance of building local support for addressing wood stove emissions that are the main culprit behind the soot problem.

Under a ballot initiative approved last fall, however, the Fairbanks North Star Borough is barred from regulating wood stoves and other solid fuel heating appliances, the lawyers wrote.

In a joint Aug. 2 filing, attorneys for EPA, the state and the environmental groups said they are in negotiations and "intend to file a proposed settlement soon."

Wheeler repeatedly urged the state to submit a proposed cleanup plan that EPA could approve.

"We are hopeful that we can stay on schedule and receive a plan this year, which would alleviate our obligation to develop a federal plan," he said.

Business interests floated their own compliance ideas, such as installing wood kilns to dry wood, although the witness conceded the Clean Air Act would need to be changed to pass legal muster.

Alaska Department of Environmental Conservation Commissioner Jason Brune said the state would submit the plan by the end of the year.

"Our ultimate goal is to find local solutions to local problems with the EPA," he said. "Ultimately, we don’t want this to be a choice between clean air and people keeping themselves warm."

Owen Hanley, a retired lung physician who has lived in Fairbanks for 43 years, noted that wood stove use in the region has doubled since the Clean Air Act was signed in 1970.

He traced the correlation between PM2.5 spikes and heart attacks and strokes, as well as the effects on children with asthma.

"This is a very serious matter, and we have to balance that with the economic cost, but the cost of these things is very high," he said.

Hanley, who was among the invited witnesses, criticized the state’s current proposal for phasing in improvements over 10 years, despite the past decade of noncompliance, "which means 10 more years of adverse health costs."

Those plans advanced despite estimates that they could lead to slight increases in pollution, with industry earning relief at the expense of lost health benefits.

"We’re looking at those proposals," he said. "We want to make sure that we can finalize something that will protect the air quality, but also allow people to continue to purchase wood stoves and use the resources that they have, without negatively impacting the air quality."