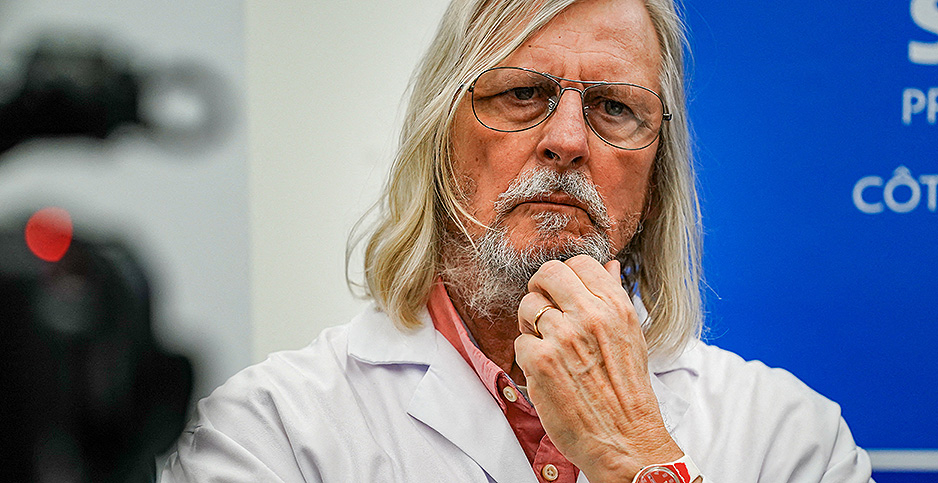 Didier Raoult is a French virologist with a history of making controversial scientific claims, including attacks on climate science. Abaca Press/Poupart Julien/Abaca/Sipa USA/Newscom

President Trump has turned to a French virologist with a history of criticizing climate science to offer the world hope amid the novel coronavirus pandemic.

Last week, Trump tweeted that the combination of two medicines could dramatically alter the often deadly course of COVID-19.

"HYDROXYCHLOROQUINE & AZITHROMYCIN, taken together, have a real chance to be one of the biggest game changers in the history of medicine," Trump wrote. He then cited a study published in the International Journal of Antimicrobial Agents that afforded little time for peer review.

Trump’s optimism comes from a small study of about 40 COVID-19 patients in France, though it wasn’t immediately clear how it came to the president’s attention.

The study was conducted by Didier Raoult, a virologist at Aix-Marseille University in France. Raoult has a history of challenging science outside of his field of expertise, including claims that Darwin’s theory of evolution was wrong and that climate models are overblown.

"Climate predictions are absurd," he wrote in a 2013 piece for a French publication, Le Point, in which Raoult declared he "hates climate forecasts."

According to a French-to-English translation, he wrote that those who take action against climate change — as well as those who do the research to examine it — have taken "more of a religious approach than a science."

"Our sense of guilt explains the transformation of the debate into something of an unscientific nature," he wrote.

While Raoult has no climate credentials, he is an influential virologist who has discovered dozens of bacteria. Raoult also has been critical of how governments have responded to the global pandemic, and he published a book this month called "Epidemics, Real Dangers and False Alarms."

In it, he blames the media for instilling fear about COVID-19. "This panic is largely due to the exaggerations of the press, which knows that fear ‘sells,’" he wrote.

It remains to be seen if Raoult has discovered a useful — and potentially lifesaving — drug regime to combat the coronavirus, health experts caution. They include Dr. Anthony Fauci, a member of Trump’s coronavirus task force who said researchers don’t know yet if the drugs are safe for people with the coronavirus.

Health ethicists say Raoult’s work, and other small studies, should not be reflexively touted as a cure — particularly by politicians looking to give people an unverified sense of hope.

Hydroxychloroquine is a derivative of an anti-malaria drug, and azithromycin is an antibiotic used to treat bacterial pneumonia.

Raoult, an influential virologist who has received funding from the French government, published a video in February called "Coronavirus: Endgame!" in which he explored Chinese experiments with hydroxychloroquine.

He quickly tested it on a small group of French COVID-19 patients in a local hospital earlier this month and, along with a group of co-authors, published his research March 20, after a day of peer review, in the International Journal of Antimicrobial Agents.

The study recommended that all COVID-19 patients be treated with the drug cocktail, even though no larger regime of testing has been conducted.

Malarial drugs can have significant side effects in some patients, including retinal failure and cardiac arrest. Despite the dramatic pronouncement that hundreds of thousands of coronavirus patients should be administered the drugs, Raoult and his co-authors acknowledged the limitations of their research.

"Our study has some limitations including a small sample size, limited long-term outcome follow-up, and dropout of six patients from the study, however in the current context, we believe that our results should be shared with the scientific community," they wrote.

A study published this week in the Journal of Zhejiang University in China contradicted the Raoult study and found that hydroxychloroquine was not any more effective than conventional coronavirus treatment. Both studies rely on a small group of patients.

The embrace of limited-research results by politicians can be dangerous, said Alison Bateman-House, a health ethicist and professor of population health at New York University.

She said there is precedent for taking unproven research when other options are not available but that it should not be touted by politicians as a solution before that is proved.

"It’s incredibly irresponsible, and it’s not something any leader should be doing," she said. "If you’re not a physician, you shouldn’t be opining on medical care."

Not conducting research with clear guidelines means the end result may not provide the scientific backing that is needed to use the treatment on a wider scale, said Bateman-House.

"If you’re not giving people these medications in a well-structured, thought-out trial that has the support and capabilities necessary to collecting the data, then you’re not advancing the science, all you’re getting is more anecdotal evidence," she said.

"Doctors can now prescribe chloroquine for that off-label purpose of dealing with the symptoms of coronavirus," Pence told reporters Saturday. "The president’s very optimistic."

Those claims may have contributed to a run on the drugs throughout the world.

Pharmacies across Africa, where malarial medications often are a matter of life or death, saw a high demand for the drug.

And the pressure to obtain the drugs in the United States has become so severe that pharmacy boards in Idaho, Kentucky, Ohio, Nevada, Oklahoma, North Carolina and Texas have issued new guidance on how the drugs should be administered, according to a New York Times article.

The Washington Post reported yesterday that Mark Meadows, Trump’s incoming chief of staff, reached out to a family doctor in upstate New York who said he has used the drugs to treat hundreds of suspected coronavirus cases.

Conservative media outlets and Fox News host Sean Hannity have touted the work of that family doctor from New York, Vladimir Zelenko. Zelenko has also used his Facebook page to say that China is using the coronavirus as a population control device.

At least one state, however, is giving the drugs a chance.

New York is now conducting a large-scale experiment, distributing the drug throughout its hospital networks to try on sick patients, and Gov. Andrew Cuomo (D) has ordered hundreds of thousands of doses. The Food and Drug Administration, at Trump’s urging, has rapidly approved the testing.

Raoult is confident his work will hold up.

"In my field, I am a star, worldwide," Raoult told the La Provence newspaper in France. "I don’t give a damn what others think. I am not an outsider. I’m streaks ahead of the others."