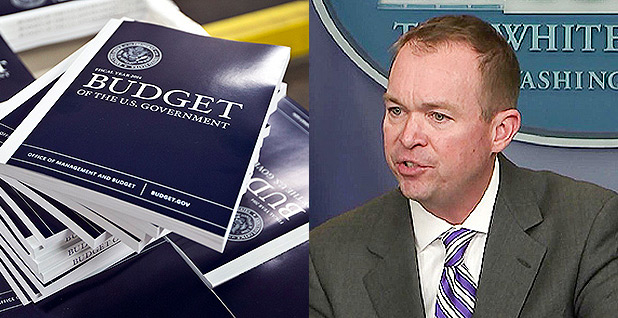 The White House proposed a dramatic cut of about 31 percent to U.S. EPA, even more than many had anticipated. The budget aims to cut climate change and environmental enforcement programs, slash EPA’s workforce by 3,200 jobs and leave the agency with its lowest funding levels since the George H.W. Bush administration.

Those cuts, the administration said in its proposal, reflect "the success of environmental protection efforts, a focus on core legal requirements, the important role of the states in implementing the nation’s environmental laws, and the president’s priority to ease the burden of unnecessary federal regulations that impose significant costs for workers and consumers without justifiable environmental benefits."

The Interior and Energy departments would see big cuts, too. Trump is proposing a 12 percent hit to Interior’s budget and a 5.6 percent cut to DOE, where cash would be shifted away from certain energy projects toward the department’s defense programs.

Overall, the new administration’s budget plan for fiscal 2018, which begins Oct. 1, aims to beef up defense spending by $54 billion, while slashing domestic spending by that same amount. The White House also released today a supplemental spending proposal for the last six months of fiscal 2017.

The fiscal blueprint, dubbed a "skinny budget," only offers top-line spending figures for each agency and highlights programs that would see major increases or cuts in the coming fiscal year. A more detailed budget is due in May that will contain line-by-line spending for agencies as well as projections for tax revenue and entitlement spending.

Many of the steep cuts proposed by the White House will face hurdles clearing Congress, but Trump’s budget outline reflects many of the energy priorities the president touted on the campaign trail and since taking office.

"We wrote it using the president’s own words. We went through his speeches, we went through articles that had been written about his policies. We talked to him. We turned those policies into numbers," Office of Management and Budget Director Mick Mulvaney told reporters yesterday.

Mulvaney said yesterday that EPA would see some of the most "significant" cuts of any agency but insisted that its core functions could still be "satisfied."

The budget also "reorients" EPA’s air program to "protect the air we breathe without unduly burdening the American economy."

EPA’s enforcement office would see its budget cut by nearly $130 million. The administration said it would concentrate EPA’s enforcement on programs that are not delegated to states. The Office of Research and Development’s budget would also be slashed.

The cuts would mean staff reductions of about 3,200 workers at the agency, according to the White House, representing a sizable chunk of EPA’s current staff of about 15,000 employees.

Mulvaney, however, said the agency would have some flexibility in deciding its staffing levels. He said Trump, unlike past presidents, would leave it up to the agencies to decide what layoffs might be required to carry out his budget plans.

One program that would see an increase is EPA’s drinking and wastewater infrastructure programs, which the White House said further Trump’s commitment to improving infrastructure.

The Interior Department would receive $11.6 billion under Trump’s plan, a 12 percent cut from current spending levels.

"It eliminates funding for unnecessary or duplicative programs while reducing funds for lower priority activities, such as acquiring new lands," it says.

A top priority in the blueprint is boosting energy development on public lands.

The Energy Department would see narrower cuts than some other agencies, in part due to a boost in defense spending within that department.

Trump has requested $28 billion for DOE, down $1.7 billion — or 5.6 percent — from current spending levels.

That includes an 11 percent increase for the National Nuclear Security Administration and cuts to other DOE programs deemed unnecessary by the new administration.

The budget for DOE "emphasizes energy technologies best positioned to enable American energy independence and domestic job-growth in the near to mid-term," the blueprint says.

Trump’s proposed cuts are far from final, and lawmakers in both parties insist that Congress will have the final say on the budget.

"There’s always a few surprises, but you to have remember this is only a proposal. Congress I don’t believe has ratified any president’s budget" without changes, said Sen. Richard Shelby (R-Ala.), a senior appropriator, ahead of the budget’s public release today.

Other appropriators, citing concerns about the cuts for EPA and foreign aid, have suggested the proposal might not have the votes to pass the House and almost certainly would not have the 60 votes needed to overcome a Senate filibuster.

"There is a lot of talk early on, if you visit with [lawmakers] privately, they just don’t think the cuts are going to be as severe as proposed," said Sen. Tom Udall (D-N.M.), the ranking member on the Interior and Environment Appropriations Subcommittee.

Udall noted that cuts to Interior would hit rural areas in the West that tend to be Republican strongholds. He said conservatives on Capitol Hill probably would reject those reductions.

Sen. Tom Carper (D-Del.), the ranking member on the Environment and Public Works Committee, said backers of EPA need to stress that the cuts would lead to less clean air and drinking water. He also said he would emphasize that the EPA budget has already been cut back over the past several years.

Carper said he expects Democrats to push back hard against proposed cuts in science funding.

"The idea of walking away from science and not being guided by science is crazy. We can’t do that, it would be foolish," he said.

Conservative critics of EPA, however, are already cheering the cuts.

"It’d be a good deal to me," said Sen. Jim Inhofe (R-Okla.), a senior EPW Committee member who has long battled EPA. Inhofe, a close ally of Pruitt, suggested that layoffs at EPA might even help the agency better focus its mission.

"They need to get back to the job they are supposed to be doing without all this political activism they have historically had," he added.