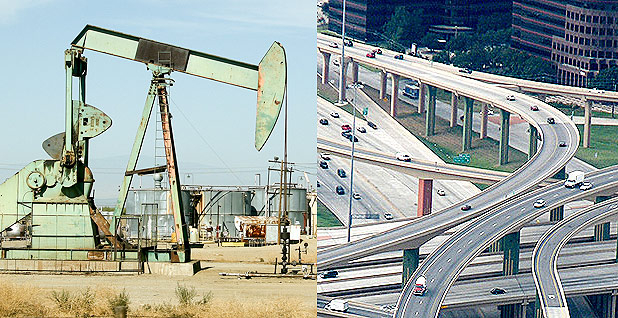 President Trump’s plan to use federal energy revenues to pay for infrastructure projects is raising budget questions among lawmakers on Capitol Hill, who nonetheless expressed bipartisan interest in learning more about the White House proposal.

As a candidate, Trump made clear that he would work to clear regulatory hurdles to boost domestic energy production, while also pledging a massive push to rebuild the crumbling infrastructure in the United States.

While there has been talk about using the tax code to stimulate private-sector investment in infrastructure, the new White House website that went up after Trump was sworn in Friday offered a clue as to how the administration envisions paying for a package that as a candidate he suggested could top $1 trillion: oil and gas revenues.

"We must take advantage of the estimated $50 trillion in untapped shale, oil, and natural gas reserves, especially those on federal lands that the American people own," states the White House’s "America First Energy Plan." "We will use the revenues from energy production to rebuild our roads, schools, bridges and public infrastructure."

The link between energy revenues and infrastructure caught even members of the Senate Republican leadership off-guard.

Senate Republican Conference Chairman John Thune (R-S.D.), who in addition to holding the No. 3 spot in leadership also leads the Commerce, Science and Transportation Committee — one of several panels that would have jurisdiction over an infrastructure package — was unaware of the White House’s position.

"That’s an idea that’s been out there for a while, but I hadn’t heard that that’s something they were proposing," he told E&E News on Monday. "I guess we’ll find out."

Senate Majority Whip John Cornyn (R-Texas) was also unfamiliar with the White House plan, which he said is worth exploring.

"There are a lot of federal lands and there’s a lot of oil and gas underneath the surface of those federal lands, so that is an untapped resource to be sure," he said in an interview Monday.

However, the White House’s plan caught the attention of at least one Senate Democrat — Maria Cantwell of Washington, the ranking member on the Energy and Natural Resources Committee — who was aware of it within hours of Trump’s inauguration address.

"We’re trying to find out" what the White House will propose, she told E&E News on Friday afternoon.

Sen. Martin Heinrich (D-N.M.) this week said he would withhold judgment on the White House’s proposal until he learned more details, but noted that under current law, federal offshore energy revenues are supposed to fill the Land and Water Conservation Fund, while lease sales and royalties from onshore public lands are split roughly between the federal Treasury and the states where the resources are produced.

"If that’s what they’re proposing, you’d have to figure out how to replace that revenue for other ongoing activities," he said Monday. "We need to pay for stuff without gimmicks, that much I can say."

Sen. Ben Cardin (D-Md.), a senior member of the Environment and Public Works and Finance committees, echoed the point.

"Obviously we’d take a look at it, but if you’re diverting funds, there isn’t enough already, so we need revenues," he said yesterday.

Leaders of both parties drew their own lines in the sand Monday night when they huddled with Trump over meatballs to break the ice.

Senate Majority Leader Mitch McConnell (R-Ky.) insisted that any infrastructure package won’t add to the deficit, while House Minority Leader Nancy Pelosi (D-Calif.) told Trump "it has to be real infrastructure" — not just tax breaks, which she said would in effect be a subsidy for the private sector, which then could charge taxpayers tolls.

Senate Minority Leader Chuck Schumer (D-N.Y.) has made no secret that he sees infrastructure as an issue that could split Trump and deficit-focused conservatives, challenging the president with the release of a $1 trillion Democratic proposal yesterday (Greenwire, Jan. 24).

"I’ve told him repeatedly, you’re going to have to tell a lot of Republicans, particularly on the right wing, they’re not going to get their way, and he acknowledged that," Schumer said yesterday.

He ignored a question from E&E News on whether Democrats would accept oil and gas revenues as a pay-for as he walked into the Senate chamber yesterday, but Schumer has previously said that repatriation of foreign profits by American firms is one viable way of paying for the bill.

"I think there probably is some appetite for that," Thune told reporters yesterday.

The White House did not respond to a request for comment on its infrastructure plans, but Trump infrastructure adviser Richard LeFrak told CNBC this week the administration’s proposal could be cut to $550 billion.

Asked about the cost yesterday, House Speaker Paul Ryan (R-Wis.) told reporters that "the size of the package will be determined by the fiscal space we create in our spring budget."

While conservative lawmakers and allied interest groups may bristle at a massive federal expenditure, the House in recent years has shown support for legislation linking oil and gas revenues to infrastructure projects.

In 2012, then-Speaker John Boehner (R-Ohio) led an effort to pay for a long-term transportation bill by cobbling together a number of bills that would open offshore areas and the Arctic National Wildlife Refuge to oil and gas drilling.

Dubbed the "American Energy and Infrastructure Jobs Act," the idea was a nonstarter in the Senate — then controlled by Democrats — but the exercise highlighted the inherent budget problems associated with using energy revenues as pay-fors.

At the time, the Congressional Budget Office estimated that the House package would generate only a few billion dollars in revenue, largely because of the lengthy time it takes to secure permits, explore and extract the resources, which would largely occur beyond the 10-year budget the office uses to assess deficit impacts of proposed legislation to comply with pay-as-you-go budgeting rules.

Sen. James Lankford (R-Okla.), a fiscal conservative who was a House member during the 2012 push, said CBO’s scoring rules underestimated the economic impact the bill would have had because the office "wasn’t able to look out over the horizon."

He still sees merit in linking energy revenues with infrastructure.

"If we can get it to work and get the math to work, I don’t have an issue with it," he told E&E News this week.

Sen. Bill Cassidy (R-La.), a member of the Energy and Finance committees, who also supported the 2012 package as a House member, said he still supports the underlying idea, which he called "the ultimate pay at the pump."

"It makes sense to me," he said Monday.

Democrats may see an opening for other pay-fors to plug the gap, such as a carbon tax, which Cardin suggested earlier this week. "Mr. Tillerson liked the carbon tax at one point," he said, laughing, referring to the past public support for the idea expressed by Trump’s nominee for secretary of State, former Exxon Mobil Corp. CEO Rex Tillerson.