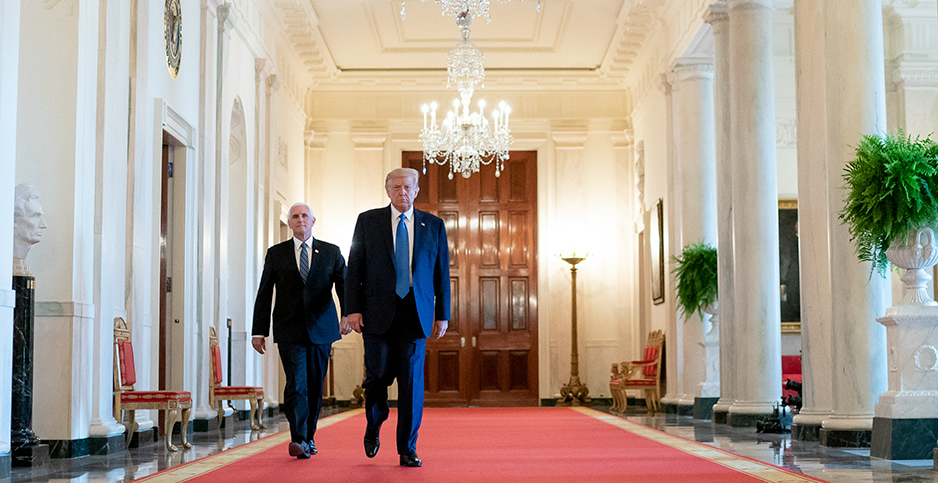 President Trump and Vice President Mike Pence are in the spotlight this week as the Republican National Convention kicks off. Tia Dufour/White House/Flickr

Expect to hear a whole lot more about fossil fuels than climate change at this week’s Republican National Convention.

Not only has President Trump defined himself as an ally of the oil and gas industry, but Trump — the country’s top Republican — has spent much of the past month banging away at energy issues.

It’s an approach that fits with Trump’s broad reelection strategy, say political observers. And he appears to be doubling down (Climatewire, Aug. 13).

Last week started with his administration moving forward with plans to drill for oil in the Arctic wilderness. Soon after, Trump argued that Democratic climate plans would leave swaths of the country unemployed. On July 29, he said that the "U.S. energy industry would grind to a halt" if Democrats took over, and on Aug. 8, he sneered at the Green New Deal as "childish." Last Thursday, he tied Democrats to "debt and death."

"At stake in this election is the survival of our nation," Trump said. Democrats are "going to waste the money on the Green New Deal. You know what you’d get out of that? Nothing. Nothing except debt and death," he said.

The 2020 Republican Party platform is a reflection of this attitude. It states that climate change is not a pressing national security issue, but rather "the triumph of extremism over common sense."

It also downplays climate science and sets it up as something to be attacked and discredited.

"Information concerning a changing climate, especially projections into the long-range future, must be based on dispassionate analysis of hard data," the platform states. "We will enforce that standard throughout the executive branch, among civil servants and presidential appointees alike."

This stance serves as a continuation of the 2016 Republican platform. That version outlined plans to withdraw from the Paris climate accord, soften endangered species protections, and roll back protections under the Clean Water Act and Clean Air Act.

All of that happened in the first term of the Trump administration.

But some Republicans say the party can’t afford to embrace this attitude for much longer.

Ignoring climate policy is out of sync not just with voters, but also with members of Congress who want the Republican Party to take a more aggressive stance on climate change, said former Rep. Carlos Curbelo (R-Fla.).

He pointed to the bipartisan Climate Solutions Caucus in the Senate, which includes seven Republicans, as well as the efforts by House Minority Leader Kevin McCarthy of California to develop climate policy for the party. He said the platform wasn’t updated because it reflects Trump.

"This is more the Trump national convention than the Republican National Convention; that’s why this and many other issues important to Republicans are not being noted in the platform," he said.

The unwillingness to look for a Republican climate plan will cost the party, said Benji Backer, president of the American Conservation Coalition, which engages young voters on climate. He said ignoring the issue may play well with older Republicans, but it will cost the party support among key voting segments. It may also come to haunt the party in future elections, he said.

"By not including climate change in the platform or on the stage during this year’s convention, the Republican Party is leaving an entire generation of conservative voters behind," he said. "Folks in older age demographics might not care as much about the Republican Party taking a stand on climate, but within the base of younger voters, they want climate to be tackled head-on, and it’s not just the base that wants action; it’s all voters, independents, moderates."

Trump plans to speak all four nights of the convention at the key 10 p.m. slot, including on the final night, Thursday, live from the South Lawn of the White House. Other speakers, including many members of the Trump family, will speak virtually as well as at the Andrew W. Mellon Auditorium located near the White House.