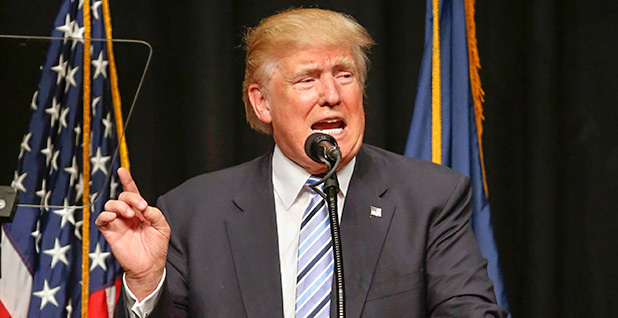 BISMARCK, N.D. — Donald Trump stopped in this hardscrabble Midwestern town yesterday to pitch his vision for an American future — one in which fossil fuel production explodes across public lands and Americans "share the riches." The end result: lower taxes, and a rush of new funding for infrastructure and entitlement programs.

In a nearly hourlong speech marking the first major energy policy address of his campaign, the presumptive Republican presidential nominee endorsed an "America first" agenda that would rely heavily on expanded oil and gas production in the United States along with a renewed focus on coal mining.

"American energy dominance will be declared a strategic economic and foreign policy goal of the United States. It’s about time," Trump told a crowd at the final event of the Williston Basin Petroleum Conference here.

Citing statistics on American oil, natural gas and coal reserves, Trump added: "Our total untapped oil and gas reserves on federal lands equal an estimated $50 trillion. … We have no idea how rich we are."

Trump framed his vision — including a "100-day action plan" that would roll back environmental regulations implemented by the Obama administration targeting carbon emissions and clean water — not only in terms of job creation but as an economic stimulus plan that would create new funds for roads and bridges, as well as schools and even Social Security (see related story).

"These actions have denied millions of Americans access to the energy wealth sitting right under our feet. … This is your treasure, and you, the American people, are entitled to share in the riches," Trump said.

He also reiterated his desire to see the Keystone XL pipeline — a 1,700-mile project that would stretch from Canada to the Gulf Coast that the Obama administration rejected last year — constructed, so long as the United States receives a portion of the profits in exchange for utilizing eminent domain to ensure the pipeline’s completion.

"Let’s take a piece of the action for you folks — lower your taxes a little bit more," Trump later added in his speech.

Trump also asserted that his proposals would create domestic energy independence — long the goal of presidential contenders from both parties — pointing to the issue as a matter of national security (Greenwire, Aug. 30, 2012).

"Under my presidency, we’ll accomplish a complete American energy independence," Trump said, prompting a loud cheer from the largely friendly audience. "Imagine a world in which our foes in the oil cartels can no longer use energy as a weapon. … We’re going to win. We’re going to win. "

‘We’ll get bureaucracy out of the way’

But while Trump called for a focus on "all forms of energy," he emphasized that the government should "not pick winners and losers," a popular refrain from Republicans who oppose tax benefits for renewable energy but support tax laws that benefit the oil and gas industry.

During the news conference, Trump also criticized solar and wind energy production for being "very, very expensive" and made remarks in both appearances criticizing the industry for killing birds.

"If you go to various places in California, which is killing all of the eagles. … The windmills are killing hundreds and hundreds of eagles. One of the most beautiful, one of the most treasured birds. … So wind is a problem," Trump said. "Despite that, I am into all types of energy."

Trump also briefly addressed the renewable fuel standard, which he pledged support for ahead of the Republican caucuses in Iowa earlier this year, and said yesterday that he plans to meet with Hawkeye State Gov. Terry Branstad (R) — a vocal cheerleader for ethanol production — in the near future.

"We’re going to look at that," Trump said. "We will be making a decision fairly soon."

No input from ‘political activists’

While Trump pledged to dismantle the Obama administration’s efforts to address climate change — he has previously dismissed climate science as a "hoax" and global warming as "bullshit" — he did not directly address the issue in his speech.

• On Clinton’s position on fracking: "What are we doing? Let’s just vote her out. I don’t know if she’s gonna get to run anyway."

• "In a Trump administration, political activists with extreme agendas will no longer write the rules. ‘Cause that’s what’s happening now. Instead, we will work with conservationists whose only agenda is protecting nature. And that’s fine."

"A Trump administration will focus on real environmental challenges — not the phony ones that we’ve been looking at," said Trump, who did not employ the phrase "climate change."

Trump later added that his "rational environmental concerns" will be clean air and clean water, although he did not specify how he plans to preserve them. He did pledge that "political activists" will not be involved in writing his administration’s environmental policies.

"We’ll solve real environmental problems in our communities, like the need for clean and safe drinking water," Trump said.

League of Conservation Voters Senior Vice President for Communications David Willett yesterday acknowledged he was surprised by Trump’s inclusion of clean air and water as priorities — particularly given his past vow to dismantle U.S. EPA if elected — but suggested that the likely nominee was merely pandering to moderate voters.

"His energy policy is the quintessential pro-energy fossil fuel industry energy plan," Willett said. "It was mostly telling the industry crowd exactly what they wanted to hear."

Willett added that Trump’s use of "energy" in his speech often appeared to be a synonym for oil and gas.

"He just plays to the room, whatever the room is," he said. "He was doing his best to sound as pro-oil as possible."

Willett also criticized Trump for failing to note that the cost for solar and wind has actually dropped in the previous decade, while also suggesting that the Republicans’ energy plan — using oil exports to pay for new infrastructure — would place the United States into a perpetual need to sell more fossil fuels.

"His plan would lock in oil in particular and gas to some extent as what we were dependent on not only for energy but also for other programs he wants to fund," Willett said.

"What we need are serious and thoughtful policies. Not empty screeds about regulation to pander to deep-pocketed GOP contributors from the oil patch," Zichal said in a statement.

"I can’t think of anything he said that I didn’t like" on energy policy, Campbell said. "God blessed us with these resources. … We can’t be dependent on another country for oil."

Similarly, American Energy Alliance President Thomas Pyle said his organization is "definitely pleased with the basic outlines of his approach to these issues."

That’s in part because Trump cited a report published by the Institute for Energy Research — the AEA serves as the institute’s advocacy arm — that found unfettered access to federal lands for oil and gas production could pump billions of dollars into the national economy (Greenwire, Dec. 8, 2015).

"It’s good that that information gets out there," said Pyle, who added that he had not spoken with Trump about using the report in his speech.

He also praised Trump’s proposal to roll back federal regulations.

"Bring it on," Pyle said. "It’s a welcome development, and we have been very vocal in saying that the next administration should definitely take a swipe at these regulations and end once and for all the Obama climate agenda. It’s obviously not good for the country."