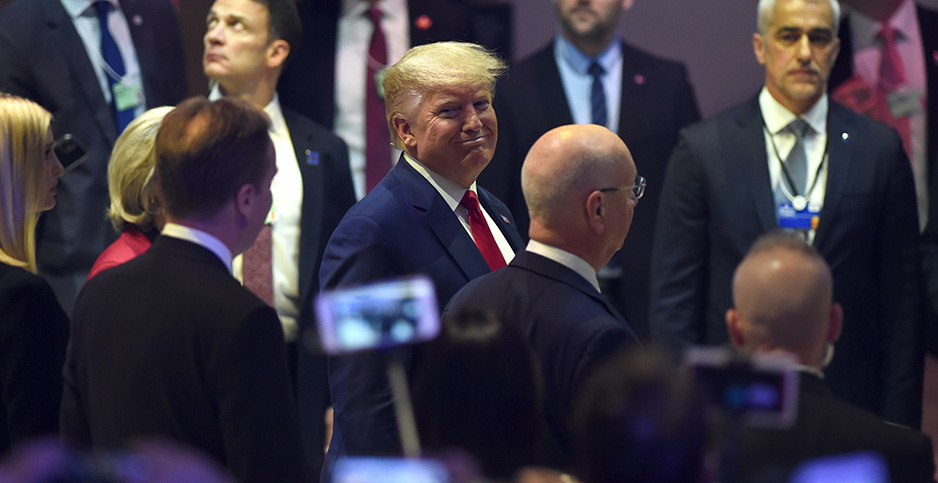 In a global meeting of business and political leaders seeking climate solutions, President Trump showed up with a sales pitch.

He urged those gathered at the World Economic Forum to buy American energy derived from fossil fuels. It comes as the European Union is crafting a Green Deal to reach net-zero emissions by 2050, a goal requiring the continent to double its renewable energy to 32% over the next decade.

Trump described America’s "virtually unlimited" energy reserves without including wind, solar, hydropower and other clean energy sources, which make up about 20% of the nation’s electricity generation. Renewable energy doubled in the U.S. between 2008 and 2018, to a record 742 million megawatt-hours. Natural gas production is also at an all-time high.

"With U.S. companies and researchers leading the way, we are on the threshold of virtually unlimited reserves of energy, including from traditional fuels, [liquefied natural gas], clean coal, next-generation nuclear power and gas hydrate technologies," Trump said.

He added, "We urge our friends in Europe to use America’s vast supply and achieve true energy security."

Trump’s comments came as climate change is a prominent feature of the annual gathering in Davos, Switzerland. The forum opened following a grim finding by its annual global risks report, which described the potential failure to halt warming, or adapt to it, as this year’s "number one long-term risk by impact and number two by likelihood."

Trump saw it differently. He criticized those who use the threat of climate change to curtail fossil fuels.

"To embrace the possibilities of tomorrow, we must reject the perennial prophets of doom and their predictions of the apocalypse," Trump said. "They are the heirs of yesterday’s foolish fortune tellers."

Trump’s speech contrasted to the words of Greta Thunberg, the 17-year-old Swedish activist who gained celebrity status by traveling the world to call for climate action. Thunberg, in her address to the forum, criticized the slow pace of world leaders to reduce emissions and to end subsidies for fossil fuels.

"Our house is still on fire," Thunberg told the crowd. "Your inaction is fueling the flames by the hour. And we are telling you to act as if you loved your children above all else."

Trump told The Wall Street Journal that Thunberg was "very angry," an echo of past criticisms, including when she was named Time magazine’s person of the year.

While Trump did not specifically call out climate science, he seemed to connect its findings with past predictions that failed to materialize.

"They predicted an overpopulation crisis in the 1960s, mass starvation in the ’70s and an end of oil in the 1990s," Trump said as Thunberg listened from the sixth row. "These alarmists always demand the same thing: absolute power to dominate, transform and control every aspect of our lives."

"It’s a sorry day when the world looks to a 17-year-old Greta Thunberg to tell us the truth, while the president flails at science and dismisses the growing public demand for action," said John Bowman, managing director of government affairs at the Natural Resources Defense Council.

Trump addressed none of those issues, choosing instead to tout his domestic accomplishments, including trade deals, the economy and job growth. He did speak with world leaders about climate change in side conversations, but few details of those conversations emerged.

Swiss President Simonetta Sommaruga urged the crowd of leaders to take stronger actions on climate change, telling them that the "world was on fire." She said politicians need to "take action in their own countries." A short time later she emerged from talks with Trump to proclaim that global warming was one of the three issues they were discussing, along with bilateral relationships and economic ties.

Australia’s finance minister, Mathias Cormann, said that the historic wildfires that ravaged his country only affected a small percentage of the continent. Australian Prime Minister Scott Morrison has been criticized at home for his refusal to connect the fires to climate change and for his policies that promote the coal industry.

"It’s about 2% of the land mass of Australia that has been impacted by those fires and 0.4% of our population, and it’s devastating for those communities, and obviously our heart goes out to them," Cormann said. "It’s important to also look at these things objectively and assess them objectively so that we prepare our responses objectively."

At a panel discussion, Paulo Guedes, Brazil’s minister of economy, was enthusiastic about Trump’s approach to environmental permitting for energy production because it was far more relaxed than in his country.