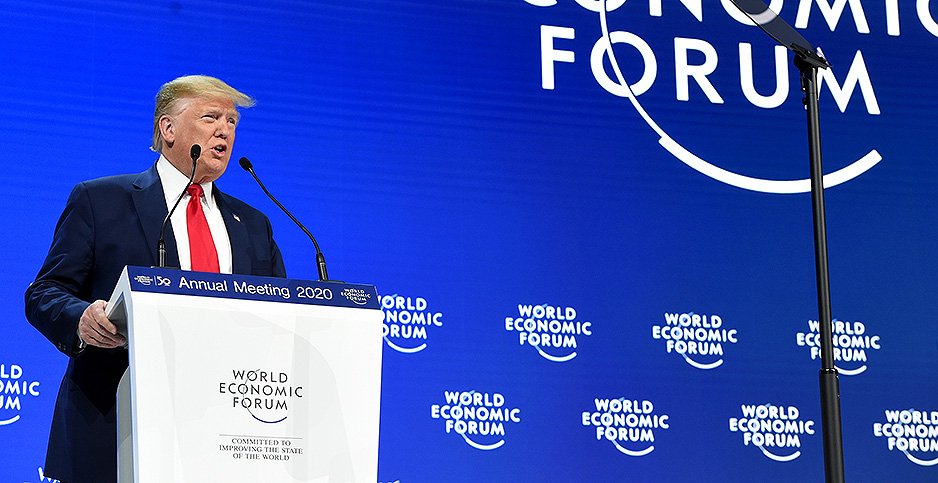 The tree program was launched at the annual World Economic Forum in Davos, Switzerland, where world leaders focused on sustainability and Trump gave his remarks.

"We will continue to restore strong leadership in restoring, growing and better managing our trees and our forest," Trump said, without giving specifics.

"We’re committed to conserving the majesty of God’s creation and the natural beauty of our world," said the president.

Trees can sequester carbon dioxide and clean air pollution, among other benefits. House Republicans working on their own plans to address climate change will also rely on tree planting (E&E Daily, Jan. 17).

Trump — who has argued at various times that the climate is not changing, that it might change back or that human activity is not a major cause — quickly turned to criticizing "prophets of doom" and "alarmists," without specifically mentioning global warming.

"To embrace the possibilities of tomorrow, we must reject the perennial prophets of doom and their predictions of the apocalypse. They are the heirs of yesterday’s foolish fortune tellers — and I have them, and you have them, and we all have them — and they want to see us do badly, but we don’t let that happen," he told the gathering, which included Swedish activist Greta Thunberg.

"They predicted an overpopulation crisis in the 1960s, mass starvation in the 1970s and an end of oil in the 1990s," he said. "These alarmists always demand the same thing: absolute power to dominate, transform and control every aspect of our lives."

Trump, who is running for reelection in less than 10 months, used his speech to boast about the United States, including its energy and fossil fuel policies, which he described as "boldly embracing American energy independence."

"We’ve been so successful that the United States no longer needs to import energy from hostile nations," the president said.

‘Emissions have to stop’

Trump’s remarks garnered nearly no response from the gathered audience, except for applause at his mention of the tree-planting program.

Shortly after Trump’s remarks, Thunberg took to the stage in another Davos session, where she castigated world leaders for not taking aggressive action against climate change and not seeking to cut greenhouse gas emissions completely.

Thunberg, who has traded barbs with Trump on Twitter previously, did not mention the U.S. president, but criticized the "One Trillion Trees" initiative.

"Planting trees is good, of course, but it’s nowhere near enough of what is needed, and it cannot replace real mitigation and rewilding nature," Thunberg said.

"Let’s be clear: We don’t need a low-carbon economy. We don’t need to lower emissions. Our emissions have to stop if we are to stay below the 1.5-degree [Celsius] target."