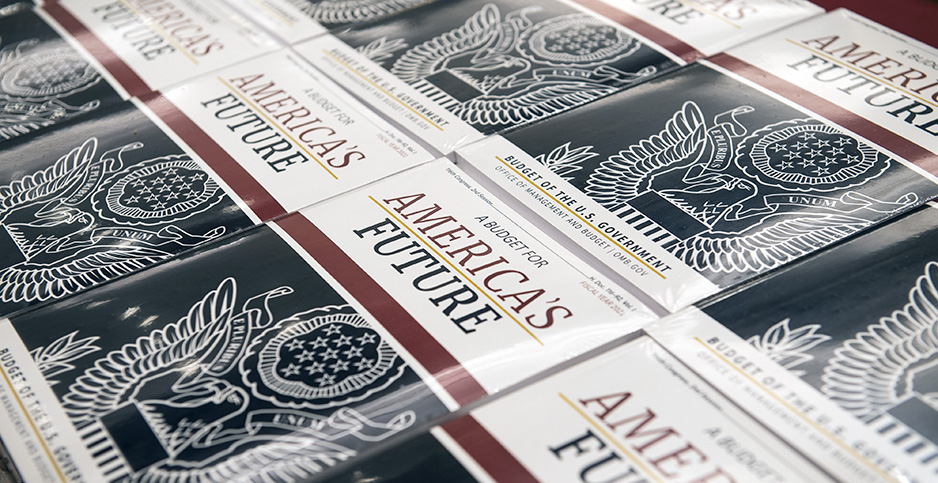 Like last year, the White House wants to cut all non-defense discretionary spending by 5%. Non-nuclear spending at the Department of Energy would be cut 29%, EPA would be reduced by 27%, the Army Corps of Engineers would drop 22% and the Interior Department would fall by 13%.

The budget proposal would cut the State Department by 21%, which includes foreign assistance programs aimed at curbing climate change.

Echoing last week’s State of the Union address, Trump touted his latest plan as building on an already strong economy.

"To ensure this economic strength continues, I have called on the government to reduce wasteful, unnecessary spending, and to fix mismanagement and redundancy across agencies," the president says in the budget plan.

Resistance on Capitol Hill is certain from lawmakers who’d prefer to stick with last summer’s bipartisan agreement that would largely flat fund agencies in fiscal 2021 after increasing spending for 2020.

The new Trump blueprint conforms to the deal’s discretionary funding levels of $741 billion, but proposed domestic spending would fall $45 billion to $590 billion.

The White House push amounts to an election year gambit aimed at appealing to the president’s conservative base, which long has been skeptical of domestic programs and foreign aid.

But Democrats see the plan as an opening to draw contrasts with the president on environmental protection, investments in clean energy and water projects.

Congress will likely use numbers from the bipartisan agreement — rather than the president’s budget proposal — to craft their fiscal 2021 appropriations bills. Final passage may not come until after the elections.

The request would continue Trump’s push to boost military coffers with funds for the new Space Force and building a border wall.

The $2 billion request for the barrier, loathed by environmentalists, is less than half of last year’s because the administration already has billions of dollars lined up from past spending bills.

NASA would fare far better than other domestic agencies, with the space agency marked for a $2.7 billion increase — a 13% boost. Those additional dollars are aimed at ramping up a United States mission to Mars.

Everglades restoration is one EPA effort likely to see more dollars. The president is proposing an increase of $50 million to $250 million. Trump ran into bipartisan criticism when he sought to cut the River of Grass spending last year.

But generally, Trump is likely to draw the ire of environmentalists for proposing no new major climate initiatives, while saying he backs the nation’s "world class standards of environmental protection." In backing his claim, the budget request notes all criteria pollutants dropped between 2016 and 2018.

The White House is recycling an infrastructure plan from past budget requests that seeks $1 trillion, although much of the funding would come from public-private partnerships and existing programs.

About $200 million would go toward nationally significant projects, in a nod to legislation, S. 2302, being pushed by Environment and Public Works Chairman John Barrasso (R-Wyo.).

On the energy front, the White House would reverse course from past years and would no longer provide any money for the Yucca Mountain nuclear waste site in Nevada.

The plan suggests a dormant Nuclear Waste Fund fee would be revived in 2023, presumably as part of an effort to fund an alternative waste disposal site.

The White House blueprint would largely ignore the deficit, which it sets at just below $1 trillion for fiscal 2021.

Most budget requests tend to balance within a decade, but the administration’s plan would not end red ink for 15 years and relies on optimistic economic assumptions.

The swelling deficit would come, in part, from a push to make permanent the 2017 tax cuts, which otherwise would expire in 2025.

Acting Office of Budget and Management chief Russ Vought will be appearing before the House Budget Committee to detail and defend the plan on Wednesday.

Senate Budget Chairman Mike Enzi (R-Wyo.), normally an administration ally, seemed to hint at some frustration with the plan, calling it "only a list of suggestions." He said Congress should come together to "put our country on a more sustainable fiscal course."

House Appropriations Chairwoman Nita Lowey (D-N.Y.) said deep cuts to climate science and other domestic programs would have "no chance at becoming law." She added: "Just as we did last year, House Democrats will write responsible appropriations bills that invest in American families and communities."