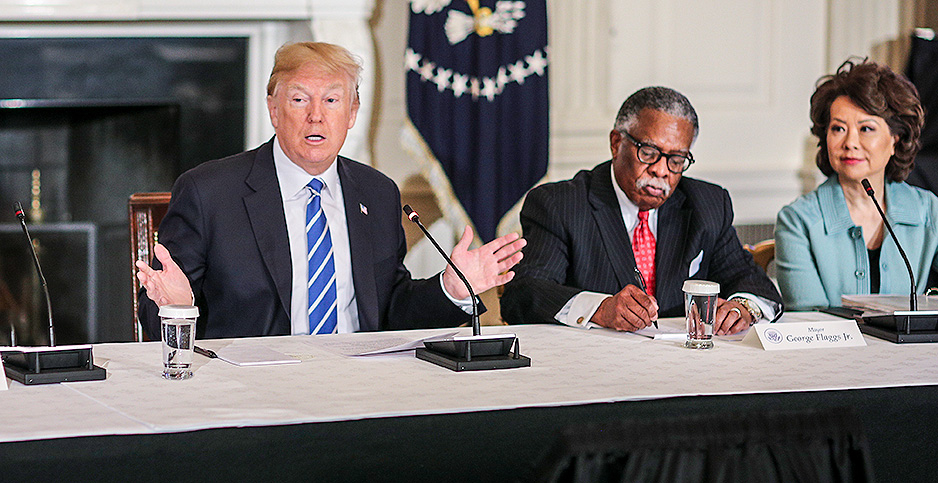 President Trump addressed a group of state, local and federal officials during a meeting on infrastructure this morning at the White House. Oliver Contreras/SIPA USA/Associated Press

President Trump today proposed big changes to the National Environmental Policy Act as part of his program to overhaul the nation’s infrastructure.

The plan, formally released this morning, includes $200 billion of new spending to be paid for by cuts elsewhere in the federal budget. Much of the proposal focuses on reforming the permitting process with a "one agency, one decision" framework for environmental reviews.

It would direct the White House Council on Environmental Quality to rewrite its NEPA guidance for the first time since 1978, with the goal of streamlining approvals. The plan would also designate a lead agency that would produce a single combined review document for each project, with a two-year deadline.

The proposal has already been panned by critics, but it marks the most detailed look yet at what the White House has in mind when it comes to reforming the environmental permitting process.

For comparison, the infrastructure outline the administration provided with last year’s budget request spanned just six pages, while the one released this morning comes in at 53.

Trump has long promised to cut down the permitting to two years or less, and the proposal delivers. That time frame is an "ambitious goal," said Ted Boling, associate director for NEPA at CEQ.

Currently, NEPA permitting averages between three and five years, though it can take up to 25, Boling said last week at the American Law Institute’s annual environmental law conference in Washington, D.C.

Environmentalists and other critics worry about rewriting the CEQ guidance, saying they don’t trust the current administration to do it in good faith. They fear the Trump team would get rid of the regulations that give the law teeth.

Boling, however, said there is room for improvement in guidelines that haven’t been updated since the dawn of the internet.

"Those regulations have a solid body of case law behind them. They are familiar, but they also date to 1978. They predate things like the internet," Boling said. "So there are some efficiencies out there, which could only have been dreamed of back in the Carter administration."

Trump’s proposal also addresses the tricky issue of judicial review. Some in the legal community have warned it would be fruitless to put a time limit on NEPA permitting without reforms to litigation because shorter reviews could leave permits more vulnerable to lawsuits.

The White House plan would put a 150-day statute of limitation on permitting decisions. Currently, it is six years for most NEPA permits, meaning a fully funded project could theoretically be blocked more than five years after getting approved, said Albert Ferlo, a partner at Perkins Coie, former Justice Department environmental attorney and a NEPA expert.

"The general statute of limitations for NEPA claims against the government is six years. So you could have a project, fully funded, approved, and after five years and 11 months wind up in litigation and you could be enjoined," Ferlo said at the law conference last week.

Environmentalists say all of that undercuts, rather than reforms, one of the nation’s bedrock environmental laws.

"This isn’t an infrastructure plan, it’s a cheap excuse to gut health and environmental safeguards that protect communities from dangerous, ill-conceived and poorly constructed projects," Raul Garcia, senior legislative counsel for Earthjustice, said in a statement.

The plan also includes a number of other permitting provisions that have already drawn fire from Trump’s critics.

It would, as expected, cut out U.S. EPA’s authority under the Clean Air Act to review other agencies’ environmental impact statements.

The move will likely worry groups that see EPA as a backstop against decisions that could harm the environment and public health.

When it comes to the Clean Water Act, the proposal would seek to clarify deadlines for states to review pipelines and water infrastructure projects under Section 401.

Current law says the Federal Energy Regulatory Commission is the lead agency on all interstate natural gas projects. But Section 401 gives states time and authority to decide if the proposed pipeline will meet state water laws.

States’ authority under Section 401 has become a target, thanks to states like New York, which has used it to deny three gas pipelines in the last two years (Energywire, Feb. 2).

The Trump plan says "states increasingly do not issue permits within the applicable time frames" and proposes amending the Clean Water Act to reduce delays, though it’s unclear exactly how that revision would be worded.

The provision is likely to roil members on both sides of the aisle, especially Democrats, worried that it would limit states’ ability to determine which projects are right for them.

As expected, the plan also includes a controversial provision that would make it easier to run natural gas pipelines through national parks (Greenwire, Jan. 31).

Current law requires Congress to approve any rights of way for the construction of natural gas pipelines across parkland, but the Trump administration says the process is too time consuming and results in too many delays. Trump wants to change the law to give the Interior secretary the power to make such decisions without congressional approval.

In addition, the plan calls for changing the Federal Power Act to address the way that other federal agencies interact with FERC.

Currently, if agencies cooperate with FERC’s preparation of NEPA reviews, they cannot then intervene in the rest of the licensing process for that project.

The topline numbers laid out in the plan are familiar: a $200 billion federal investment over 10 years that would leverage about $1.5 trillion total with contributions from state and local governments and the private sector.

Also familiar is how that federal investment would be split up. Half would go to an Infrastructure Incentives Program to spur local and private contributions, while $50 billion would go toward rural infrastructure. A new "transformative projects" program and existing financing programs would get $20 billion each.

The remaining $10 billion would go into a "federal capital revolving fund" with the goal of reducing inefficient leasing of federal property and provide more revenue from energy and mineral development on public lands.

All of that would be paid for with a variety of cuts. For instance, the president’s fiscal 2019 budget proposal released today would halve funding for Amtrak grants to encourage greater state investment.

As another example, the budget would eliminate the popular Transportation Investment Generating Economic Recovery (TIGER) grant program, an idea that was rejected by Senate appropriators last year.

The White House plan advances a few ideas about public lands and cleanup that have been in the works in the administration for months.

As expected, it would establish an Interior maintenance fund to help address the maintenance backlog on public lands, which in the case of the National Park Service totals more than $11.3 billion.

Lawmakers have raised concerns over the proposal’s reliance on oil and gas revenues, many of which are already dedicated to other federal programs, including some that trickle down to state and local governments (E&E Daily, Feb. 12).

To address Interior’s infrastructure portfolio — which the proposal notes includes roughly 100,000 miles of roads, as well as dams, bridges, irrigation and power systems — the administration wants to allow revenues raised from mineral and energy development on public lands to be used for capital improvements and maintenance of public infrastructure, which is not allowed under current law.

It would allow half of additional revenues generated by "expanded federal energy development" to be deposited into the fund to be used to address the maintenance backlog, until the total amount reaches $18 billion.

According to the proposal, the monies in the fund would be available to address maintenance and capital needs in national parks and wildlife refuges "without fiscal year limitation."

However, appropriators have historically taken a dim view of proposals that would limit their "power of the purse" by giving the administration free rein.

The infrastructure plan includes several proposed reforms to the law that guides cleanups of the nation’s most polluted tracts.

The changes to the Superfund program "would expand funding eligibility for revitalization projects and establish tools to manage and address legal and financial risks" associated with them, the White House said.

Specifically, the administration calls for amending the Comprehensive Environmental Response, Compensation and Liability Act — the law that established the polluted land cleanup program — to allow Superfund sites to get grants from the brownfield program, which currently targets sites suspected of contamination.

CERCLA would also be reformed to limit liability for state and local governments or companies that partner in the cleanup or reuse of Superfund sites.

Trump met with a group of mayors and other local leaders — as well as EPA Administrator Scott Pruitt — at the White House this morning to kick off his sales campaign.

"Washington no longer will be a roadblock to progress," Trump told the group.

A senior White House official said the president and the Cabinet will be travelling around the country to pitch the plan, but it still faces long political odds of passing this year.

The plan has made expected enemies of greens, but it has others hoping for more as well. Democrats have focused their rhetoric on clean water, renewable energy and climate resilience, and they’re likely to want those issues addressed when Congress writes a bill.

As it is now, the renewable energy industry isn’t happy about being left out.

"The president’s proposed infrastructure plan is intended to leverage public capital to attract private investment, but it fails to build on the momentum generated by the largest source of private-sector infrastructure investment for the past seven years: renewable energy," said Greg Wetstone, CEO of the American Council on Renewable Energy.

"Any serious effort to address America’s infrastructure needs to focus on the modernization of our antiquated electrical grid," he said.

Top Republicans on the House Energy and Commerce Committee, meanwhile, praised the plan and touted their own efforts to reform permitting and advance energy infrastructure projects.

"Please permit us to say that President Trump hit the nail on the head when constructing this plan to rebuild America’s infrastructure," Reps. Greg Walden (R-Ore.), Fred Upton (R-Mich.), John Shimkus (R-Ill.) and Marsha Blackburn (R-Tenn.) said in a statement this morning. "Improving our country’s infrastructure can be a bipartisan effort."

Democrats have been skeptical of Trump’s ideas, particularly leveraging $1.5 trillion in total investment with such a small federal payment.

And Democrats — as well as some Republicans — likely won’t be willing to fund the federal piece with cuts to other priorities, especially since the budget proposes cutting some popular items.

But in a joint statement today, Sens. John Thune (R-S.D.) and Bill Nelson (D-Fla.) — the chairman and ranking member of the Commerce, Science and Transportation Committee — said they were prepared to make it a bipartisan push.

"We need to make real investments — not cuts — in Florida and communities around the country," Nelson said. "That’s why I plan to work with Chairman Thune and my colleagues on the Senate Commerce Committee to try to come up with a bill that can garner broad support and include ideas from both parties."