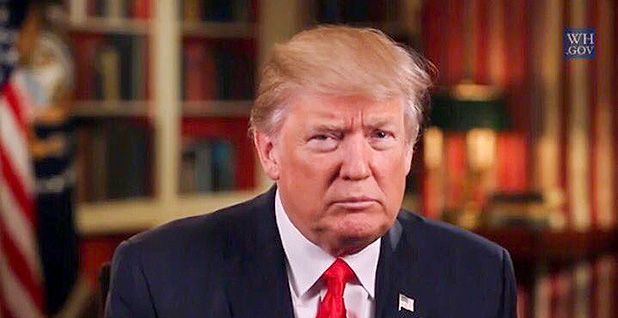 President Trump says he may leave many federal positions unfilled. Photo courtesy of the White House.

President Trump became a reality TV star with his catchphrase "you’re fired." But his emerging plan as president to streamline government by turning away hundreds of potential political appointees is drawing mixed reviews.

During an interview on Fox News’ "Fox & Friends" last week, the president said it may be "unnecessary" to fill scores of top federal jobs. He said such a move would be a "good thing" and a sign he is "running a very good, efficient government" by eliminating redundant posts.

Trump did not specify what jobs might stay vacant, but as president he has final say on filling about 4,000 political slots. Of those, roughly 1,200 positions need Senate confirmation.

With Trump’s Cabinet now largely in place, Capitol Hill is bracing for an onslaught of nominees for deputy secretaries, associate administrators and other senior officials. But the president doesn’t seem to be in a hurry to hire people, and the parties are split over that decision.

Republicans are open to letting vacancies stand if Trump decides it won’t affect operations and it will save money. Democrats, on the other hand, say the move could further hamstring an administration struggling to gain its footing and may even diminish the clout of some agencies.

Sen. John Barrasso (R-Wyo.), chairman of the Environment and Public Works Committee, said it’s a "decision for the administration" on what jobs should be filled and he’ll be "interested" in what Trump’s team determines. Barrasso’s panel is responsible for considering 13 yet-to-be-named nominees at U.S. EPA, including a deputy administrator and 10 associate administrators.

EPW Committee ranking member Tom Carper (D-Del.) said it might be the right move to leave some jobs open. But, he said, Trump needs to quickly make a fair assessment rather than simply deciding he can go without a few layers of agency management.

"I suspect most will [be needed], some will not," said Carper. The Democrat said that experience shows agencies work best with a full cadre of senior leaders in place.

A close ally of new EPA chief Scott Pruitt, Inhofe said the regulator will push the president’s environmental agenda with or without a full slate of senior leaders. Scrapping or redoing rules, as many Republicans want, also takes top leaders in place.

House conservatives, who don’t have a say in confirming nominees but regularly hold hearings with leaders from different agencies, say trimming some jobs might make political sense for the president.

"There is an appetite from Republicans that government is too big, costs too much and that streamlining can occur. So where do you do the streamlining? It’s easy for him to not appoint," said Rep. John Shimkus (R-Ill.), a senior member of the Energy and Commerce Committee.

Rep. Rob Bishop (R-Utah), chairman of the Natural Resources Committee, said the Interior Department’s new leadership may eliminate some undersecretary or deputy openings. Bishop said too often federal agencies measure their clout by how many political appointees they have at the top.

Interior has 17 positions that still require Senate approval, including the directors of the Bureau of Land Management and National Park Service and the head of the Fish and Wildlife Service. The Department of Energy, meanwhile, has 22 more posts to fill.

Some Republicans privately suggest that not filling the jobs could backfire on the White House. If those openings are left vacant, career federal workers would have greater latitude in executing policy without having to worry about losing their jobs for bucking or slow-walking Trump initiatives.

But Rep. Raúl Grijalva (D-Ariz.), the ranking Democrat on Natural Resources, believes that when top jobs remain unfilled, agencies are less effective in carrying out their missions. Grijalva said that could include regulatory work at EPA and land management at Interior.

"I think it’s intentional, honestly, and I thinks it’s targeted," said Grijalva, who conceded that Democrats have no legislative option for forcing the president to make appointments.

Sen. Dick Durbin (D-Ill.), the chamber’s No 2. Democrat, said how Trump chooses to run his administration is "his business." But, he added that so far most of his agencies have been struggling to function. Durbin said he’s not convinced there are many surplus jobs to cut.

Independent experts on the federal bureaucracy say some streamlining may be due.

The sheer number of slots that presidents need to fill has created an unwieldy process that doesn’t benefit the executive or legislative branches, said Max Stier, CEO of the Partnership for Public Service, a nonprofit group that closely tracks the appointments process for 552 key administration jobs requiring confirmation.

"I think that there are too many political appointees, and not only [that] but too many that require Senate confirmation," said Stier.

Stier stressed that any cuts must be strategic, otherwise they would be counterproductive. He suggested some vacancies could come by not naming what he calls "free radicals" — positions like special assistant, deputy chief of staff or senior counsel — that surround leaders, creating organization clutter and uncertain decisionmaking.

There are also several non-policy positions in agencies — high-profile jobs that relate to government management, operations and technology — that should be reserved for career employees instead of political appointees, said Bill Valdez, president of the Senior Executives Association, an advocacy organization for the top cadre of career federal workers.

For instance, if an agency has a politically appointed chief technology officer and that person leaves during an administration transition, any important cybersecurity initiatives could remain in limbo until a new leader comes in.

"It will take the new political [appointee] a year at least to figure out how the Department of Energy’s IT infrastructure has to be adapted to new cybersecurity requirements," said Valdez, a former longtime senior executive at DOE. "So, we think President Trump may be onto something here."

According to Valdez, reserving certain senior jobs for experienced executives with institutional knowledge, rather than political appointees, would help the new administration implement its agenda faster.

Streamlining the political appointments process and reducing those jobs crops up every time a new administration comes into office. Congress in 2012 passed a law that slashed about 170 executive branch nominations from Senate approval.

But even though some lawmakers and the administration recognize the need to improve the overall political appointments process, lawmakers sometimes thwart efficiency by being unwilling to exempt nominees from a confirmation process that gives them clout.

"For the government, it’s a bad thing overall," Stier said.