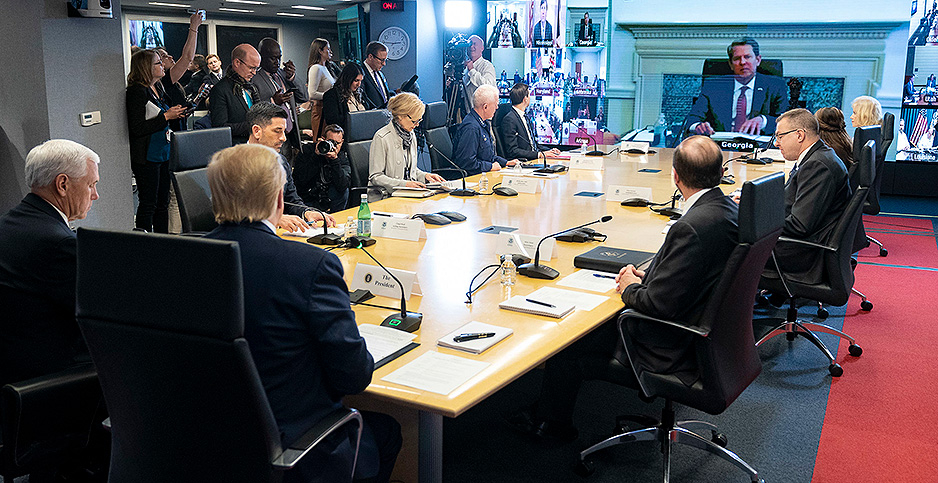 President Trump has become the first U.S. president to declare a health epidemic a "major disaster" in his recent decisions to approve requests for that designation from the governors of California, New York and Washington in their battles against COVID-19.

In doing so, Trump took an expansive and legally questionable view of federal disaster law that will place new demands on the Federal Emergency Management Agency as it leads the administration’s response to the pandemic.

Trump yesterday approved requests by Govs. Gavin Newsom of California and Jay Inslee of Washington to have their states declared a "major disaster" and thus eligible for some FEMA disaster relief programs. A similar request by Gov. Andrew Cuomo of New York was approved Friday. The three states account for more than two-thirds of U.S. COVID-19 deaths, which yesterday exceeded 400.

Trump’s determinations could open the door for FEMA to step into a wide range of future events including droughts, extreme cold weather and the contamination of drinking water. States hit by such events previously have been declared ineligible for federal disaster aid.

The decisions by the president for California, New York and Washington likely will encourage other governors to seek FEMA disaster aid to help with COVID-19 outbreaks.

"With the precedent set, and legal challenges during the crisis unlikely, other states are sure to come forward with their own requests," former FEMA Deputy Director Daniel Kaniewski wrote on Twitter after Trump’s decision on New York.

Gov. Kim Reynolds of Iowa asked Trump on Friday to declare the state a "major disaster" — though COVID-19 has not hit Iowa nearly as hard as it’s hit New York and Washington.

Trump’s determinations could be on shaky legal ground.

A March 2 memo by the Congressional Research Service says that "under current law, a major disaster declaration has not been authorized in response to a public health incident of any type." Disaster declarations typically have been reserved for natural events such as hurricanes and floods.

Sen. Kamala Harris (D-Calif.) said last week, "FEMA is not currently allowed to assist individuals who have been impacted by a pandemic." Harris, a former California attorney general, made the statement as she introduced a bill to enable pandemic victims to get direct FEMA aid.

Trump’s disaster approvals "could trigger a legal debate" because a president "has never declared a disaster for a pandemic," Kaniewski said. "But as a practical matter, what we are now seeing with #coronavirus is both unprecedented and a disaster."

Trump’s decisions on California, New York and Washington came as he has put FEMA in charge of the federal response to COVID-19, bringing new pressure to an agency that Congress and federal investigators have criticized for its response to major events such as Hurricane Maria in Puerto Rico in 2017 and Hurricane Katrina in Louisiana in 2005.

Harris last week urged the Senate committee that oversees FEMA to hold a hearing on whether the agency is able to handle COVID-19 as hurricane and wildfire seasons approach.

"We are now facing the prospect of a major natural disaster compounding the current public health emergency from the coronavirus pandemic," Harris wrote March 16 to Sen. Ron Johnson (R-Wis.), chairman of the Senate Homeland Security and Governmental Affairs Committee.

Although Trump approved requests by Newsom, Cuomo and Inslee for disaster declarations, the approvals did not give the governors everything they sought.

Cuomo, Newsom and Inslee, all Democrats, asked Trump to make several FEMA disaster relief programs available for their residents such as housing assistance and unemployment benefits for people who do not qualify for standard state unemployment programs.

But Trump approved only one FEMA program for all three states — crisis counseling, which pays for programs that help people deal with psychological effects of a disaster.

"Today’s declaration does not unlock many forms of federal assistance we have requested to help workers and families who are badly hurting," Inslee said in a statement yesterday after Trump’s decision. "The state urgently requires additional federal emergency assistance in order to save lives, protect public health and safety, and limit further spread of the disease."

Trump is still considering the governors’ requests for more types of FEMA aid than were approved, an agency spokesperson said.

Disaster-related unemployment assistance could prove crucial. Millions of Americans are at risk of losing their jobs because of widespread business closings and orders by government officials for residents to stay at home. The disaster unemployment program pays people who can’t get standard unemployment benefits — possibly because they are self-employed, lack an earnings history or have used all of their unemployment benefits.

Lawmakers are likely to include enhanced unemployment benefits in a federal stimulus package they are negotiating that could be worth up to $2 trillion.

Trump’s approval of a disaster declaration related to COVID-19 reverses a long pattern of presidents interpreting federal law strictly and rejecting governors who had sought the declarations for events that were not natural catastrophes.

Trump himself rejected a request in 2017 by Gov. Doug Burgum of North Dakota to have a drought declared a major disaster. FEMA said in the decision that disaster aid "is not appropriate for this event."

Lawmakers and legal experts have questioned for years whether public health incidents can be declared a major disaster.

Fires, floods and explosions also can be declared major disasters. President George W. Bush used that provision to declare a major disaster after the Sept. 11, 2001, attacks.

Sen. Susan Collins (R-Maine) sought in 2008 to amend the Stafford Act to expand the definition of "major disaster" to include outbreaks of infectious disease. Her measure was not approved.

On Thursday, Harris, the California senator, introduced a similar bill that would add "pandemic" to the list of incidents that can trigger a disaster declaration.

"At a time when a global pandemic is threatening the financial stability of working families across our country, there is no reason for FEMA to treat those impacted by biological threats any differently than when a natural disaster strikes," Harris said.