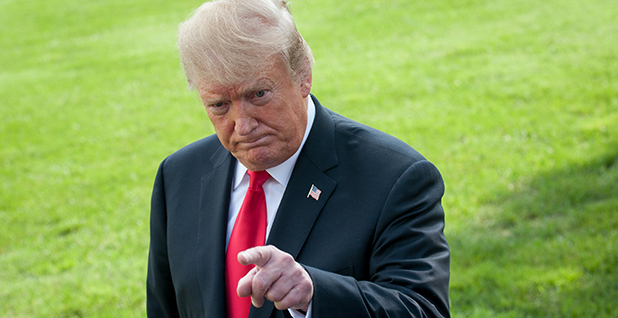 President Trump expressed skepticism yesterday about a major U.N. report on climate change that warned of irreversible warming if the world fails to act immediately.

Trump said he wanted to know more about who wrote the report. He has been historically dismissive of climate science, calling it "bullshit" and a "hoax" before he was elected. More recently, he claimed that low temperatures disprove climate change.

The report’s authors are 91 scientists from 40 countries who analyzed more than 6,000 scientific studies as part of the Intergovernmental Panel on Climate Change, which won the Nobel Peace Prize in 2007. It’s generally regarded as the vanguard of climate science.

"Findings issued today by the world’s preeminent climate scientists urgently underscore the need to dramatically step up global action against climate change," Bob Perciasepe, president of the Center for Climate and Energy Solutions, said in a statement. "The IPCC’s special report reinforces, with even greater certainty, what was already abundantly clear — climate change poses truly grave risks, and we can avoid the worst of them only by quickly ramping up our collective efforts."

The IPCC report released Monday in Incheon, South Korea, warned that keeping global temperatures from rising 1.5 degrees Celsius by 2100 is necessary to avoid the worst damage from climate change. Achieving that mark requires a 45 percent global greenhouse gas reduction by 2030 and carbon neutrality by 2050, the report said (Climatewire, Oct. 9).

The report is part of the Paris climate accord process. Trump has signaled he will pull the United States out of the global climate pact.

Conservative groups and Republican politicians like Sen. Jim Inhofe of Oklahoma have long attacked the IPCC. They say it excludes scientists who downplay the effect of burning fossil fuels.