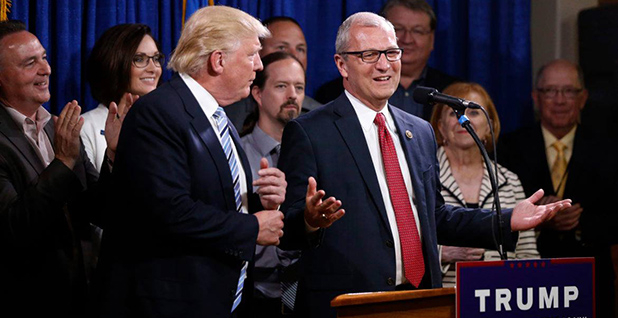 Rep. Kevin Cramer (R-N.D.) has several pictures of or with President Trump on his Twitter feeds. @kevincramer/Twitter

When President Trump rallies supporters in Fargo, N.D., tomorrow evening, it’s a near certainty that Rep. Kevin Cramer (R-N.D.) will be by his side. But what’s less clear is how much the conservative three-term lawmaker will benefit from embracing the populist president in his bid to unseat the Roughrider State’s Democratic Sen. Heidi Heitkamp.

A former state utilities commissioner, Cramer told E&E News the race will be "way more" about himself and Heitkamp than Trump. While welcoming the president’s support and backing many of his policies, the two men don’t always agree. Cramer broke with the president over trade policies and expressed some lingering frustration with the White House’s sometimes friendly relationship with Heitkamp.

"Don’t get me wrong, I welcome him coming, I hope he comes often. He told me when he recruited me that he would campaign for me more than I would," Cramer said in a more than 30-minute interview late last week. "I’ll take him any day he wants to come to North Dakota, but that said, North Dakotans are going to make their choice based on what we have done for them, not what he has done for them."

Cramer also said the state has a long history of ticket splitting, noting he and Heitkamp were both elected to their current posts in the same 2012 election.

Cramer was one of the first House members to sign onto Trump’s long-shot presidential bid. He was heavily recruited by the White House and Senate Republicans to take on the first-term senator in a state Trump won by a whopping 36 points over Hillary Clinton.

The GOP views the state as a prime takeover target and believes with three statewide wins already under his belt for the lone House seat, Cramer starts the Senate race as the favorite. Democrats concede the race will be tight but also say Heitkamp has effectively positioned herself as a moderate and is personally popular.

Independent political analysts, including The Cook Political Report and Inside Elections, both rate the race a toss-up. And a recent Mason-Dixon poll gives Cramer a narrow 48 percent to 44 percent lead over Heitkamp, an edge within its margin of error.

Kyle Kondik, managing editor of the nonpartisan Sabato’s Crystal Ball at the University of Virginia’s Center for Politics, said he believes the race is on track to be among the closest in the country. He said Cramer’s path to victory is to keep together the coalition of Republicans who elected Trump, while for Heitkamp it’s to pitch herself as "checks and balances" on the White House.

But he questions whether this week’s presidential appearance will matter much, noting that high-profile rallies Trump held for GOP Alabama Senate nominee Roy Moore and Pennsylvania House Republican hopeful Rick Saccone in special elections did not make them winners.

Former North Dakota Sen. Byron Dorgan, a three-term Democrat who is backing Heitkamp, said he is doubtful of Trump’s impact, stressing that retail politics and personal interactions still matter more than any presidential appearance in the sparsely populated state.

Trump will "be there and he’ll be gone. I am sure he will attract a crowd, but I don’t believe it rubs off on anybody," he added.

Trump’s trade policies, particularly his push for tariffs, worry the state’s large agriculture, energy and manufacturing sectors that fear retaliatory efforts by other nations could hurt them economically.

Cramer expressed some unease about the impacts of a lingering trade war, but for now he’s willing to give Trump time to use the tariffs as a negotiating ploy. He said some contentious accords, including disputes over the North American Free Trade Agreement, could be settled well before the election and benefit the state.

"Tariffs in my mind aren’t the best tool in a negotiation. I don’t mind that they are a tool in a trade negotiation, it’s when they become a weapon in a trade war that it becomes problematic," he said.

Many farmers are willing to give Trump "some room" to try to negotiate a better deal, he said. Heitkamp’s criticism of Trump’s trade policies are "putting fuel on the fires of hysteria," he added, and suggested they could lead to destabilizing commodity markets.

For her part, Heitkamp has been sounding the alarm on the effects of Trump’s trade policies, which last week she called "a self-inflicted wound" on the state’s energy, agriculture and manufacturing sectors.

"Our oil producers could take a big hit if the U.S. isn’t smarter about trade policy," she said in a statement.

Trump’s steel tariffs are a concern given that steel is a big part of the energy sector, she told E&E News last week. "A lot of the steel that they use either in pipeline or in drilling is not manufactured in this country," she said.

The risks of a trade war could further erode the benefits of the 2015 law that ended the decades-old crude oil export ban, which Heitkamp played a central role in passing through the Senate.

China’s threat to retaliate against U.S. oil imports is "very, very troubling," Heitkamp said, given that China is the third-largest market for American crude and a major destination for the growth in U.S. exports, which is nearing 2 million barrels per day.

Tariffs also threaten North Dakota’s agriculture market, and Heitkamp noted the state’s heavy equipment manufacturers also depend on steel. "This has been very disruptive," she said.

Furthermore, tariff fears are on everyone’s minds in the state, which she called "very trade savvy."

"You can’t go anywhere in North Dakota or listen to talk radio where people aren’t talking about tariffs," she said.

Kondik did not dismiss the impact agriculture tariffs could have in the race. He noted that in the past, GOP-leaning farm states have backed Democrats to protest Republican policies that have been seen as hurting farmers.

Cramer’s more than eager to talk about areas where he has found common ground with the administration and breaks with Heitkamp, citing his support for the tax overhaul, regulatory rollbacks and strengthening border security.

He also expects energy, given its economic impact in the state, to be an area where he differentiates himself from the incumbent.

For example, Cramer says, Heitkamp’s opposition to killing a federal rule limiting methane venting on natural gas fields ensured it was one of the few Congressional Review Act rollbacks to fail in the GOP Congress.

He also said she was late to the game in backing the Keystone XL pipeline, only supporting it after it was clear it would win congressional backing.

Heitkamp, for her part, has promoted her work on energy and environmental issues — positions more in line with Trump than some in her party. In a statewide television ad that started airing last week, she highlighted her push for lifting the ban on oil exports and support for scrapping Obama-era wetlands rules.

Both candidates are being heavily funded by the energy industry, a sign that issues such as energy tariffs and EPA rollbacks will come up on the campaign trail (see related story).

Cramer downplayed comments he made to multiple outlets earlier this month that he was frustrated with the White House for not being more publicly critical of Heitkamp.

His concerns were aired in late May when Heitkamp was featured standing next to the president at a White House bill-signing ceremony, while he was barely within camera range a few rows back.

According to Cramer, talk of a rift between his campaign and the administration is "exaggerated." The congressman said of the president, "He recruited me for crying out loud."

“He recruited me for crying out loud.”

Cramer, who was likely a shoo-in for re-election to the lone House seat from North Dakota, added that "the president doesn’t go after [Heitkamp] the same way he goes after others. That could be one tweet away, one rally away from going the other direction."

Indeed, Trump has been less critical of Heitkamp than other Senate Democrats, memorably calling her a "good woman" and shaking hands with her last September during a visit to the state to promote a tax overhaul. The administration has often seen Heitkamp as a potential vote it can win on nominations, including her support for EPA chief Scott Pruitt.

"People remember the good woman, but they forget how much pressure he put on her to vote for [the tax cuts] and then she didn’t," said Cramer, who puts the blame on Trump’s staff rather than the president himself.

"I think that was some of the naivete of the businesspeople in the executive branch," said Cramer. "Sometimes not being a creature of the political system, you don’t understand how tough a fight it can be to get someone to do something they don’t want do."