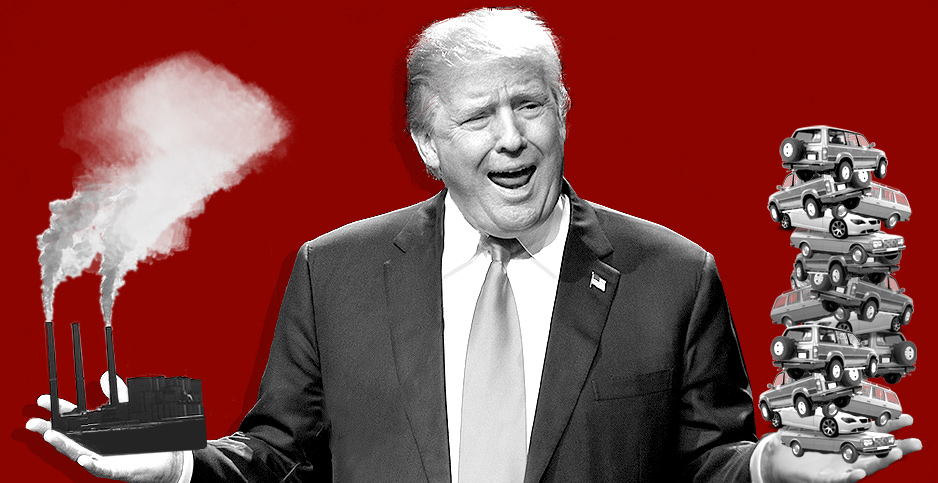 August was supposed to be a quiet month for climate politics, a time when Congress went on recess; President Trump played golf in Bedminster, N.J.; and Americans took a break from politics before this November’s midterm elections.

Instead, it may go down as a historic turning point in U.S. climate efforts.

The twin blows could have an outsized impact on carbon-cutting efforts globally, analysts said, potentially slowing the pace of emission reductions internationally and halting momentum to decarbonize the economy. EPA’s own analysis suggests that replacing the two Obama-era standards with Trump’s proposals would increase carbon emissions by as much as 141 million metric tons in 2030 — the equivalent of running around 35 coal-fired power plants for a year.

"I’ve started to describe this as a one-two punch for the climate," said Janet McCabe, who served as acting EPA air chief under Obama. "If people weren’t convinced already that this administration is not focused on taking real action on climate change, this ought to convince them."

The United States, the world’s second-largest emitter of carbon dioxide, has been a leading carbon cutter in recent years. In 2017, the United States, the United Kingdom and Japan were among the only large economies to post carbon declines, according to the International Energy Agency. Trump may have labeled climate change a "hoax" and initiated the process for pulling America out of the Paris climate accord, but U.S. carbon emissions fell by 25 million tons, or 0.5 percent, last year (Climatewire, March 23).

EPA’s moves threaten to stymie that momentum. Transportation is the largest source of U.S. greenhouse gas emissions, followed by the power sector. Emissions from cars and trucks have slowly climbed in recent years, while power-sector emissions have dropped. In fact, power plants accounted for 80 percent of U.S. carbon reductions between 2005 and 2016, according to federal figures.

While many analysts project that American utilities will continue to move away from coal and toward lower-carbon alternatives like natural gas, wind and solar, EPA’s moves could slow the rate of emission reductions. That, in turn, could send ripples across the globe.

"I doubt other countries would pick up the slack to cover less ambition in the U.S. — each country will follow a path that suits it," said Glen Peters, research director at the Center for International Climate and Environment Research. Trump’s proposals, he added, have the potential to snowball, opening the door for other major economies to reduce or eliminate their emission goals. Australia is engaged in debate over whether it should roll back its climate goals.

"If U.S. emissions are likely to go down less fast as previously, or even increase, then the global picture is not so promising," Peters said.

Dallas Burtraw, a research fellow at Resources for the Future, projects that power-sector emissions will continue to decline. In his view, the real damage from Trump’s proposals could come in the transportation and building sectors. All scenarios for deep decarbonization of the economy largely rely on electrifying transportation, home heating and cooling.

"That is an embryonic trend right now," Burtraw said, adding that the administration’s moves have a major impact "because it delays this trend toward electrification."

EPA and the National Highway Traffic Safety Administration earlier this month outlined a series of options for the clean car rules. The agency’s preference was freezing fuel economy targets at 2020 levels through 2026, rather than maintaining Obama’s year-over-year fuel efficiency increases (Greenwire, Aug. 2). EPA estimates show that the freeze would increase emissions by about 100 million metric tons of CO2 in 2030.

In their own analysis, the agencies acknowledge that the weakened car rule would lead to a 9 percent increase in greenhouse gas emissions through 2100. And the Rhodium Group, an economic consulting firm, estimates that the rollback would release up to an additional 931 million metric tons of CO2 between 2022 and 2035.

That’s equivalent to adding 199 million new passenger vehicles to the road for a year, according to a tool on EPA’s website that lets consumers calculate the impact of their emissions. It’s also equivalent to running 231 coal-fired power plants for a year.

"It’s incredible how much this would erode the gains that we’ve had thus far," said Dave Cooke, senior vehicles analyst with the Union of Concerned Scientists. "There are so many reasons why flatlining the 2020 standard is bad policy. It’s hard to know where to begin. But it’s pretty clear just how significant the climate impacts would be."

It’s possible that motorists would emit less than 931 million metric tons of CO2. That’s an upper-bound estimate, said John Larsen, an analyst with the Rhodium Group. The lower-bound estimate is 321 million metric tons of CO2, he said. The reason for the discrepancy is that the group accounted for future fluctuations in oil prices, Larsen said. Economists have found that people drive less when oil prices go up.

Meanwhile, the Trump administration earlier this week released a Clean Power Plan replacement that would give states wide latitude for determining how to cut greenhouse gases from the power sector. The Affordable Clean Energy plan is far narrower than Obama’s proposal, which sought to cut emissions across the power sector rather than only at individual plants (Climatewire, Aug. 21).

Under Obama’s plan, the country’s greenhouse gas emissions from power plants were projected to drop 32 percent below 2005 levels by 2030.

Trump’s plan envisions continuing those reductions, but at a slower pace. EPA’s revised projections estimate that carbon emissions would have fallen to 1,737 million tons under the Clean Power Plan by 2030, or 36 percent of 2005 levels.

Under Trump’s Affordable Clean Energy plan, they would fall to at least 1,798 million tons. That is 33 percent below 2005 levels, but nearly 3 percentage points higher than what emissions would have been under the Clean Power Plan.

"We need to be building on the fact these market forces are building in the right direction," said Dan Lashof of the World Resources Institute. "This, obviously, goes in the opposite direction."