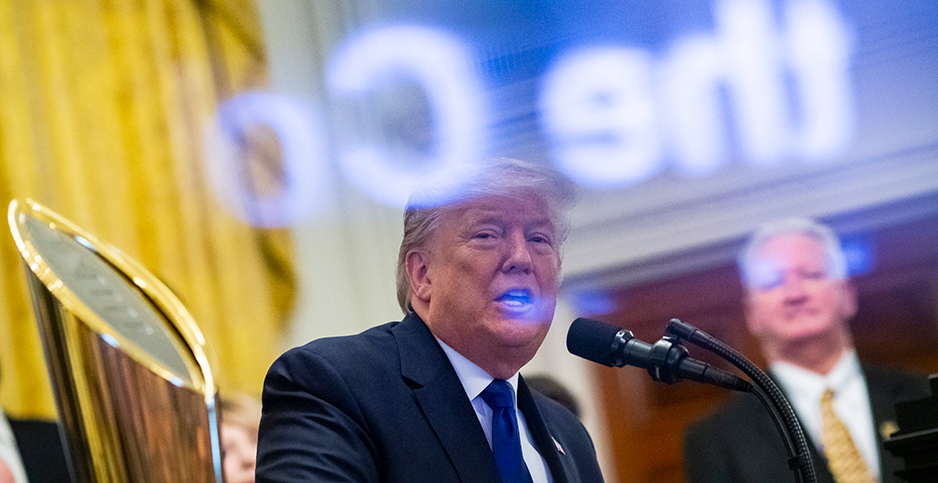 Americans are flushing toilets 10 times, showers aren’t cleaning people like they used to and dishwashers must run five times to be effective.

That’s President Trump’s latest twist on environmental messaging as he makes his pitch for a second term. And it’s one that political strategists said is reflective of so many aspects of Trump’s political career.

At recent rallies and media appearances, Trump has complained about energy-efficient dishwashers and toilets and called for showers that can actually wash his "beautiful head of hair."

"You’re in there five times longer than you’re supposed to be," Trump said last week at a Wisconsin rally. "You use probably more water. And it’s a very unpleasant experience. Right? So we’re getting rid of the restrictors, you’re going to have full shower flow."

The rhetoric is a departure from the environmental message that Trump delivered last summer at the White House, in which he argued that a rollback of regulations was good for the Earth and the economy.

It’s significantly different, too, from a major focus of his 2016 campaign: his vow to save the declining — and environmentally destructive — U.S. coal industry.

For one, Trump’s environmental message is ever-changing — similar to his erratic takes on climate change.

It’s also a falsehood that plays on nostalgia — like so many other Trump claims — because toilets work just as well as they always have while using far less water, observers say.

What’s more, Trump is again crafting a populist message that can draw average Americans into deregulatory policy by convincing them the toilet they use is worse than their grandfather’s commode.

Trump’s dishwasher rants probably stick with voters in a way that talking about the streamlining of environmental impact statements on infrastructure projects never will, said GOP pollster Glen Bolger.

Touch on something that affects people in their daily lives, though, and they will remember it in a way that an overview of environmental policy won’t, he said.

Bolger said, "He’s a salesman, and he’s used to reading a crowd that he’s trying to sell to."

Last July, appliances were not the main focus when Trump delivered his first environmental speech, in which he reiterated his desire for "crystal-clean water."

Instead, he tried to repackage his environmental record — which has focused on expanding oil and gas development and rolling back regulations — as good for jobs and the economy while protecting the planet. His campaign said it was the main message the president would build on during the 2020 election season.

The approach was pushed by Jared Kushner, the president’s son-in-law and senior White House adviser, as a way to reframe Trump’s weakness on environmental policy with suburban and millennial voters.

There was internal party pressure too.

Republican lawmakers in districts vulnerable to climate impacts have pressed the White House to do more on global warming. Also notable: A poll from HuffPost and YouGov showed that two-thirds of Republican voters younger than 45 are at least "somewhat" concerned about climate change.

In the weeks following that speech, Trump hinted at a slight shift on climate change, at least in terms of messaging.

In September, Trump briefly attended a United Nations session on climate change after signaling he would skip it. That same month, Trump also connected Texas flooding to climate change.

That approach since has fizzled. In its place: showers and dishwashers.

An erratic take on climate

Trump has said he takes climate seriously and that he wants the cleanest air and water.

But he’s also questioned the reality of sea-level rise, referred to global warming as a hoax and suggested that climate change is just a natural cycle.

The last few weeks have been particularly erratic.

At a rally last month, he said that sea levels were not going to rise much in the coming centuries — which is untrue.

"The ocean is going to rise one-eighth of an inch within the next 250 years," Trump joked to a crowd in Pennsylvania. "We are going to be wiped out."

But earlier this month, he told reporters in the White House that he was a "big believer" in climate change.

"Nothing’s a hoax about that," he said. "It’s a very serious subject."

Then again last week, Trump mocked a New York Times story on a $119 billion plan from the Army Corps of Engineers to deal with a climate future that will see rising sea levels as well as more extreme storms.

Trump tweeted that the idea would not work and that "mops & buckets" would be adequate to handle future storms.

"A massive 200 Billion Dollar Sea Wall, built around New York to protect it from rare storms, is a costly, foolish & environmentally unfriendly idea that, when needed, probably won’t work anyway. It will also look terrible. Sorry, you’ll just have to get your mops & buckets ready!" Trump tweeted.

Playing to the crowd

Changing his approach, though, could be a way for the onetime reality star to keep his campaign fresh and entertaining — and away from negative headlines.

Coal was a key pillar of Trump’s 2016 campaign, but last week in Wisconsin he never mentioned it.

One possible explanation is the state of the coal industry, which has been in a free fall since Trump took office.

Coal consumption was down 18% last year, and a drop of 11% is predicted this year. Even fracking got only a passing mention at a recent Milwaukee rally, in which Trump noted the U.S. is the world’s leading natural gas and oil producer.

One conservative strategist speculated that the change in rhetoric was due to Trump’s ability to read a crowd.

"Trump would learn faster than other politicians because he speaks more frequently to larger groups," said Americans for Tax Reform President Grover Norquist. "If the whole crowd gets excited about any part of your speech, that’s a keeper."

Trump’s focus on appliances, he added, speaks to people who feel that government regulations are hurting their lives. Trump is smart to address voters who want things back the way they were, including washers and dryers, before appliances became a "government-approved puritan energy-Nazi-designed thing," he added.

"This feeds into a narrative that people know is true," Norquist said. "It shows the lack of connections between the bureaucrats and the politicians that pass this stuff and propose it, and normal people."

That’s the intent, said a White House official, speaking on background. People generally don’t care what companies claim about the costs of regulations and how much they will cost consumers, the official said. However, selling voters on the idea that rolling back regulations will improve their daily lives is a potent political message, the official added.

"The president … has tried to personalize regulatory burdens," the official said. "In speeches and rallies, he always mentions how much households have saved or realized as a result of the administration’s deregulatory actions. The efficiency regulations are a natural outgrowth of that. In politics, if you can personalize, you usually win."

Yet some observers contend Trump’s environmental sales pitch is nothing more than snake oil.

On climate issues, Trump has embraced wild conspiracy theories, including the false claim that wind turbines cause cancer. His rhetoric on appliances fits a similar mold.

While conservative groups have long fought against efficiency standards, there is a significant amount of data that shows consumers are saving money on water and electricity bills with newer appliances.

Toilets have become far more efficient, performing the same function with far less water, according to EPA. Where older toilets, manufactured before the 1980s, once used 6 gallons or more, newer toilets use about 1.3 gallons of water per flush, the agency found.

The Alliance for Water Efficiency notes that the "new generation of plumbing fixtures have been documented to perform very well and at a very reasonable cost to the consumer." In addition, even high-flow toilets clog, which is why plungers were invented years ago.

In his speeches, Trump presumably is railing against the Energy Policy Act, which was passed 28 years ago and signed into law by President George H.W. Bush. The measure governed shower and bathroom faucets, as well as toilets and other water fixtures.

Since then, there have been big leaps in efficiency. For example, dishwashers use half the water and energy they required 20 years ago, according to Consumer Reports.

Trump has ordered EPA to look into rolling back the standards. But even if EPA produces a report that backs up the president’s claims, it would take an act of Congress to undo the Energy Policy Act.

Nor would it likely improve life at home.

There are years of academic research that have found that not only are modern appliances just as good as, or usually better than, their predecessors, they also save people money, said Andrew deLaski, executive director of the Appliance Standards Awareness Project.

He said Trump’s message was based on nostalgia and individual anecdotes rather than reality.

"They’re tapping into these rose-colored glasses perception of the past that somehow in the past everything was better, and when it comes to appliances it doesn’t check out," he said. "Modern appliances are better than any appliances that your parents or grandparents had."