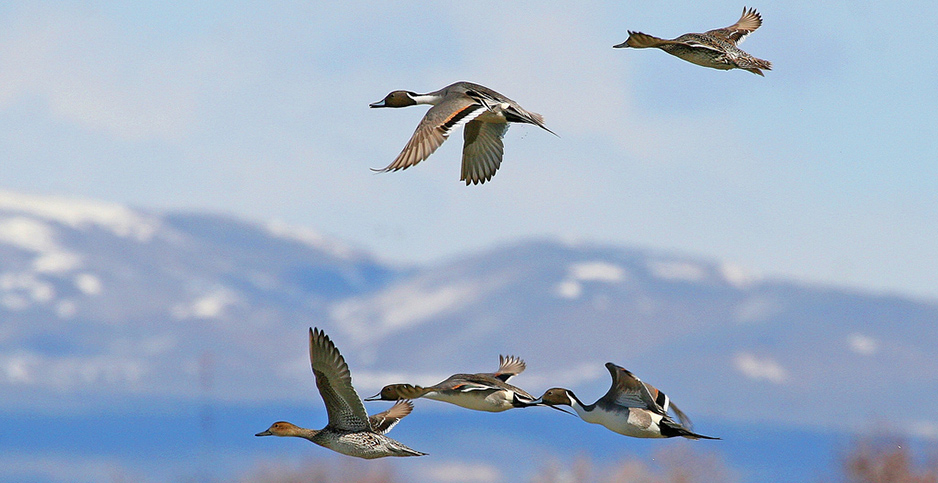 The Trump administration has taken a major step toward rolling back protections for migratory birds. J. Kelly/U.S. Fish and Wildlife Service/Flickr

Companies will save money but more birds will die under the Trump administration’s plan to limit Migratory Bird Treaty Act coverage to intentional actions, the Fish and Wildlife Service predicts in a study of the hot-button rulemaking proposal.

The final environmental impact statement posted Friday sets the stage for the rule change to be imposed in the administration’s final weeks.

"Negative impacts on migratory birds are expected to increase over time as more entities react to the certainty that incidental take is not prohibited," the EIS predicts, adding that "for some industries … there would likely be cost savings from not implementing beneficial practices."

For example, one helpful avian-friendly practice is to delay construction and vegetation clearing during migratory bird nesting season. FWS states that "some operators may choose to avoid such costs with no threat of enforcement under the MBTA."

Environmentalists decried the administration’s narrowing of the 1918 law that currently covers 1,093 bird species.

"President Trump may have pardoned a turkey [last] week, but he’s in a frenzy to finalize his bird-killer policy before the end of the year," said David Yarnold, president and CEO of the National Audubon Society.

Prior to the Trump administration, FWS considered actions that directly and foreseeably resulted in the death of a migratory bird as potential criminal conduct, even if unintentional. This legal lens is called strict liability.

The Deepwater Horizon oil spill in the Gulf of Mexico, for instance, resulted in BP PLC paying $100.1 million in MBTA-related fines. The fines were deposited in the North American Wetlands Conservation Fund and used to protect or restore wetland habitat for migratory birds.

At the same time, the service noted that "historically, federal courts have interpreted the MBTA inconsistently … which has created a patchwork system of enforcement across the country and created legal uncertainty for the American people."

The rule change will "potentially reduce the regulatory burden on the public, and simplify the obligations of the Service’s law enforcement officers under the MBTA," according to the agency.

‘To kill a mockingbird’

An Interior Department solicitor’s opinion issued in December 2017 reversed the Obama administration’s take on the bird-protecting law and asserted that it covered only intentional killings.

"Interpreting the MBTA to apply to incidental or accidental actions hangs the sword of Damocles over a host of otherwise lawful and productive actions, threatening up to six months in jail and a $15,000 penalty for each and every bird injured or killed," the Trump administration’s opinion stated.

The proposed regulation now under review would codify and help lock in the opinion of the Interior solicitor’s office that incidental bird take resulting from an otherwise lawful activity is not prohibited under the MBTA.

"A legal opinion of the Department of the Interior does not provide the public or other federal departments and agencies with the certainty of a codified regulation," FWS has noted.

Environmental groups including the Natural Resources Defense Council and the National Audubon Society sued, as did eight states.

Judge Valerie Caproni of the U.S. District Court for the Southern District of New York struck down last August the Interior legal opinion that removed penalties for activities or hazards, such as oil pits or power line electrocutions, that result in the accidental taking of a migratory bird (Greenwire, Aug. 12).

"It is not only a sin to kill a mockingbird, it is also a crime," Caproni wrote, citing the 1960 novel by Harper Lee. "That has been the letter of the law for the past century.

"But if the Department of the Interior has its way," she added, "many mockingbirds and other migratory birds that delight people and support ecosystems throughout the country will be killed without legal consequence."

The Justice Department formally declared it is appealing the judge’s Aug. 11 decision striking down Interior’s interpretation of the law (Greenwire, Oct. 9).

"This is another step by the U.S. Fish and Wildlife to jam through a rule to cement an interpretation of the Migratory Bird Treaty Act that a federal court has already declared illegal," Defenders of Wildlife President and CEO Jamie Rappaport Clark said.