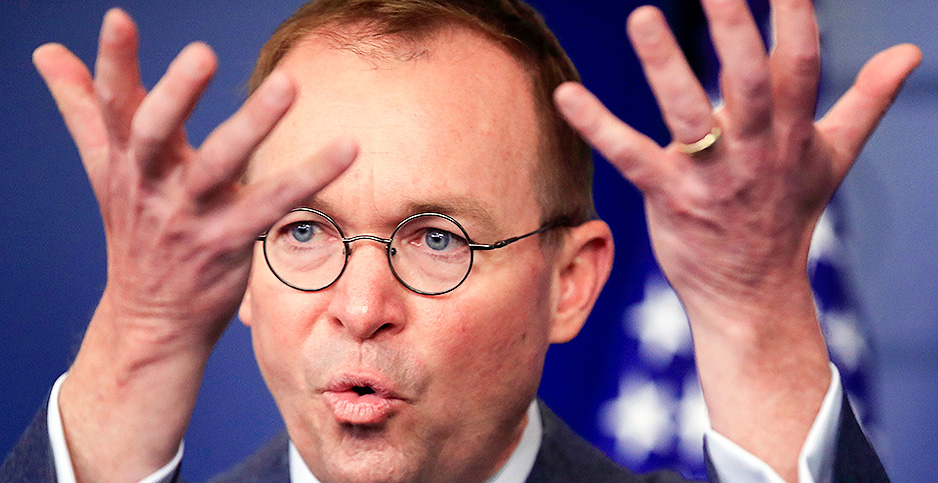 The Interior Department would take over part of the Army Corps of Engineers’ civil works program under a wildly ambitious federal government reorganization plan proposed by the Trump administration today.

The plan also would merge the Fish and Wildlife Service and NOAA Fisheries within Interior, among many other proposals.

Months in the drafting, the energy and environmental ideas presented by the White House Office of Management and Budget are only part of a larger reorganization scheme that includes merging the Labor and Education departments and moving food stamps from the Department of Agriculture to the Department of Health and Human Services.

"This effort, along with the recent executive orders on federal unions, are the biggest pieces so far of our plan to drain the swamp. The federal government is bloated, opaque, bureaucratic and inefficient," said OMB Director Mick Mulvaney.

Administration officials bill the plan as an exercise in good government. Skeptics call it far-fetched, the latest in a decadeslong series of reorganization proposals that sound good on paper but face big-time resistance from Capitol Hill, bureaucracies and regulated industries.

Congress, for one, would have to find the time and political space for a massive administrative undertaking amid the competing priorities and impediments of an election year. Regulated industries tend to grow comfortable with their overseers. President Trump would have to stay focused.

The Government Accountability Office underscored the point in a 2009 report, noting that "policymakers over the last four decades made several unsuccessful attempts to reorganize the nation’s land and resource agencies," among others.

"These proposals, however, were unsuccessful for a number of reasons, including political resistance to the specific changes and shifting government priorities," GAO noted.

The still-relevant 2009 GAO study came in response to lawmakers potentially interested in moving the Forest Service back to Interior, from which the agency had been pulled by Congress in 1905 (Greenwire, June 7).

Bureaucratically, USDA has consistently resisted surrendering control of the Forest Service, whose approximately 34,000 employees number more than any other branch of the department. The Trump proposal does not resurrect the old idea of folding the Forest Service into Interior.

The new proposal would:

Fold Interior and USDA hazardous material programs into EPA’s Superfund program. That should allow EPA to more easily clean up waste sites on federal land, while Interior and USDA can keep their reclamation programs for other sites, the proposal said.

Trump’s plan also would have EPA streamline and reduce its oversight of state regulators to focus on "national consistency" and provide technical assistance to states. In addition, the agency would assess using owned office space versus leasing for its field operations and review management of its laboratories.

The new governmentwide reorganization proposal is separate from Zinke’s plan to shuffle his department by redrawing regional maps and moving personnel and possibly an agency’s headquarters out of Washington, D.C. (Greenwire, May 23).

A similarly ambitious governmentwide reorganization proposal crashed and burned in 1949, underscoring the difficulties ahead.

The so-called Hoover Commission proposed many moves, including taking the Bureau of Indian Affairs, the Bureau of Land Management and commercial fish operations out of Interior and moving the Army Corps of Engineers’ flood control and rivers-and-harbors work in. The idea died.

Formally called the Commission on Organization of the Executive Branch of the Government, the group was composed of esteemed individuals and experts outside of government. The Trump plan, by contrast, was drafted by the White House’s own OMB.

Neither the Energy Department nor EPA existed at the time of the 1949 Hoover Commission’s set of proposals.

"The White House … must get congressional buy-in and bipartisan support, make substantial, upfront investments, and plan for sustained attention over many years," Stier said.