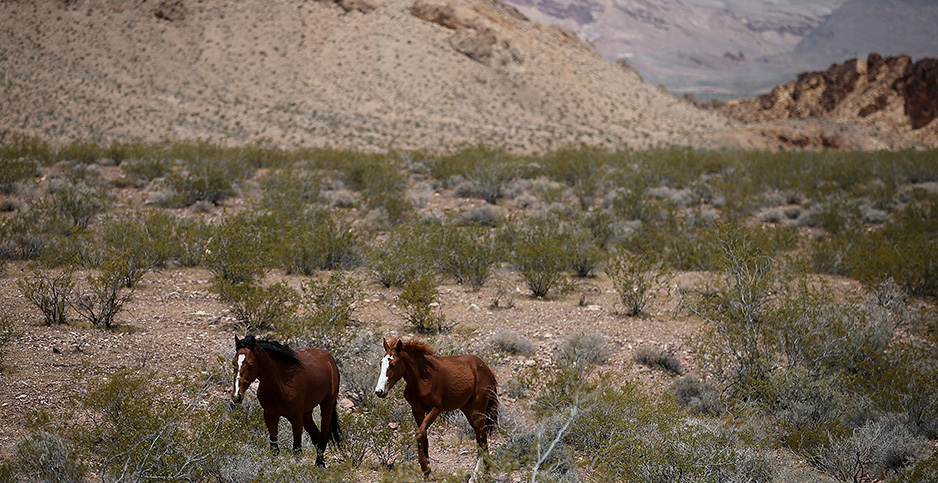 The Bureau of Land Management’s aggressive Trump-era wild horse and burro roundup strategy, slammed by critics as cruel and unnecessary, apparently cut herd sizes on federal rangelands for the first time in nearly a decade.

The decrease of 8,925 wild horses and burros may not seem like much, representing a modest 9% drop from last year’s record count of 95,114 animals.

The latest count is also the lowest estimate since March 2018, when the total population stood at 81,951 wild horses and burros, according to bureau statistics.

The population estimate comes roughly 24 hours after Holle Waddell, BLM’s wild horse and burro acting division chief, told members of the bureau’s National Wild Horse and Burro Advisory Board that the agency was still working on determining how many wild horses and burros are actually on federal rangelands (Greenwire, July 1).

But the latest population counts show that if BLM wants to reduce the number of wild horses and burros on federal rangelands, it’s likely on the right path.

BLM is continuing the implementation of an aggressive herd reduction strategy begun during the Trump administration — and outlined in a report last year to Congress — that ramped up wild horse and burro gathers and removals, including contracting for more corral and holding pen space to hold the animals.

That strategy, which the Trump administration began to fully implement last year, called for permanently removing 20,000 animals annually, and rounding up an additional 9,000 animals a year and treating them with "some form of long-term temporary or permanent fertility control" before returning them to the range (E&E News PM, May 12, 2020).

From mid-2019 through Feb. 26 of this year, BLM conducted roughly 60 roundups that resulted in removing nearly 15,000 wild horses and burros, according to the latest bureau statistics. Most of these animals were permanently removed; some of the mares were treated with fertility control vaccines and released.

President Biden’s fiscal 2022 budget request asks Congress to dramatically increase funding for BLM’s Wild Horse and Burro Program, with the goal of rounding up large numbers of animals (Greenwire, June 1). House appropriators have proposed increasing the wild horse budget up to $162 million, with $11 million required to go toward implementation of fertility control vaccines.

The latest population numbers appear to show the strategy is working.

But the 86,189 wild horses and burros are still more than three times the maximum number of animals that BLM says federal rangelands can sustain without causing damage to vegetation, soils and other resources.

A former senior Interior Department official involved in wild horse and burro management told E&E News that the latest population estimates give him "hope" that BLM can manage populations appropriately.

But the former official, who asked not to be identified, also acknowledged that getting populations down to the appropriate management level will be difficult and that "the challenges for BLM are still great."

For example, wild horses produce around 20,000 foals annually, and if left alone the total populations can double in four years.

"Success will depend on sustained and increasing annual levels of funding for the program, sustained annual removals that exceed the rates of annual population increase, successful acquisition of more corrals and pastures to hold unadopted animals, development and use of more effective fertility control vaccines/methods, and maintenance of a vigorous adoption program," the official said.

"Progress in achieving the [appropriate management level] will be diminished or regress if any one or more of these factors doesn’t come to be," the official added.

Wild horse advocates don’t see the lower population estimate unveiled today as any kind of victory for the animals.

Roundups, especially those that use helicopters to frighten horses into pens and corrals, are controversial, and many wild horse and burro advocates are strongly opposed. That’s mainly because the frightened animals can fall and break bones, and even trample foals.

There are also allegations that some wild horses and burros in BLM’s adoption incentive program ended up at auctions with known "kill buyers" representing slaughterhouses in Canada and Mexico (Greenwire, May 17).

The adoption incentive program, begun in early 2019, offers $1,000 to those who adopt one of the 51,000 wild horses in off-range holding corrals and pastures. Participants receive $500 upfront and an additional $500 per adopted animal a year later, after a follow-up review determines the adopter is properly caring for the horse or horses and title has been transferred to the private party.

The New York Times, using documents obtained by wild horse advocacy groups, reported that "truckloads of horses were dumped at slaughter auctions as soon as their adopters got the federal money."

Nada Culver, BLM’s deputy director of policy and programs, yesterday told the National Wild Horse and Burro Advisory Board that the bureau is conducting an internal investigation into those claims and adding some new safeguards (Greenwire, June 30).

Wild horse advocates have lobbied for expanding the use of darting animals with porcine zona pellucida, or PZP. While effective, the vaccine requires more than one dose and renders mares infertile for about a year.

BLM has also been working with researchers to develop longer-lasting fertility control vaccines.

In addition, BLM has attempted to test permanent sterilization techniques for mares.

But the Biden administration recently notified several wild horse advocacy groups that it will not move forward with a plan approved last year to test a controversial sterilization method on wild mares in Utah (Greenwire, April 20).

The sterilization technique — called ovariectomy via colpotomy — involves removing the ovaries from mares.

Grace Kuhn, a spokeswoman for the American Wild Horse Campaign, said that despite the decline, roundups "are at best a temporary fix."