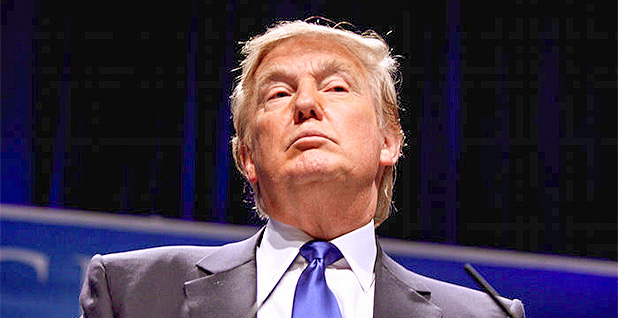 President Trump in a tweet yesterday alleged that California law is causing the state to waste water that should be used for fighting wildfires. One critic called the tweet "gobbledygook." Gage Skimore/Flickr

President Trump blamed environmental laws yesterday for intensifying wildfires in California, in his first tweet about the ongoing disaster that has killed at least seven people.

"California wildfires are being magnified & made so much worse by the bad environmental laws which aren’t allowing massive amount of readily available water to be properly utilized. It is being diverted into the Pacific Ocean," Trump wrote.

Trump seemed to be referring to proposals by some California Republicans to expand the Shasta Dam, located near the heart of the Carr Fire. Those plans aim to store more water for farms and residents instead of releasing it for river ecosystems (E&E Daily, March 16). Firefighters aren’t running out of water as they battle the blazes, experts said.

The White House, the Interior Department and the Forest Service declined to explain the president’s remarks.

More than 129 million trees have died since 2010 in California, a problem that state officials trace back to climate change.

"This is part of a trend — a new normal — that we gotta deal with," Gov. Jerry Brown (D) said Saturday in a news conference about the fires, adding that the disasters offer a chance for people to overcome ideological divisions.

After Trump’s tweet yesterday, a spokesman for Brown said "this doesn’t merit a response."

Others found it befuddling.

"This is gobbledygook bullshit," tweeted Peter Gleick, co-founder of the Pacific Institute and a member of the the U.S. National Academy of Sciences.

"California’s forests and rangelands aren’t dry and burning because of CA’s water policies," Gleick said. "There’s no shortage of water to fight fires."

Gleick continued: "California’s forests are burning because of past severe drought and current extreme temperatures and weather, worsened by human-caused climate change, which you think, in your fantasy world, doesn’t exist."

Firefighters from Australia and New Zealand are scheduled to arrive in Northern California today to help battle two huge blazes that were about half contained over the weekend. The Carr Fire has displaced more than 40,000 people, while the Mendocino Complex Fire has grown to the fifth-largest in state history.

The White House issued a major disaster declaration over the weekend. That activates additional personnel and funding; about 200 soldiers will join the effort this week.

With several major wildfires burning across California, officials suggested they would decide where to deploy the extra firefighters once they arrived.

"Fire season is really just beginning," Cal Fire Director Ken Pimlott said, explaining that such intense conditions used to come around the peak of the season.

"This will be the kinds of conditions we’ll be facing all summer," he said.