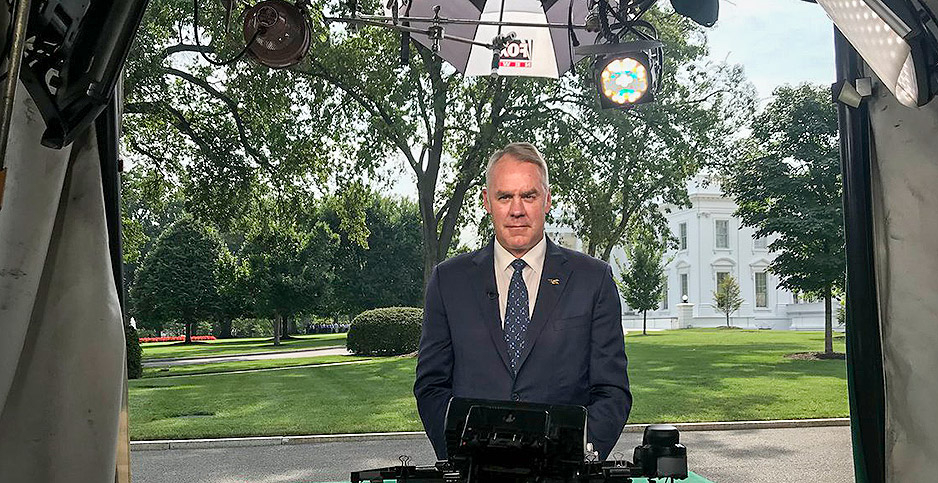 President Trump was so pleased that Interior Secretary Ryan Zinke dismissed the connection between wildfires and climate change that he asked him to repeat it during yesterday’s Cabinet meeting.

That set off alarm bells among forestry experts and former Interior Department leaders. Climate science may play a small role for the firefighters responding to the blazes — but it’s key for anticipating fires and restoring the ecosystems they have burned, they said.

Zinke’s preferred policies have merit, they said, but the long-term success of his initiatives depends on understanding how global warming could alter forests in the coming decades.

The administration’s antipathy to climate science undercuts that outcome, the officials said, and it robs the department of at least two potential advantages. Interior’s archipelago of climate adaptation centers offers granular research that could help tailor policies to specific areas. And at the other end of the spectrum, the department’s vast holdings of public land could enable management plans that make entire landscapes more resilient to future conditions.

Established techniques like thinning overgrown forests and using prescribed burns would happen regardless of Zinke’s attitude toward global warming. But the effectiveness of those tactics depends on a climate-informed strategy, said Lynn Scarlett, who was Interior’s deputy secretary during the George W. Bush administration and served as acting chief in 2006.

That means the department cannot effectively plan for wildfires unless it accounts for all those worsening factors, said David Hayes, who was Interior’s deputy secretary during the Clinton and Obama administrations.

"What climate change has done is increase the stakes of all of this," he said. "If you’re in denial about the profoundness of the change and the significance of the impact, you’re going to underresource the response to it."

An attempt to reckon with the full scope of the problem is the Forest Service’s new strategy document, unveiled yesterday to rare applause from environmentalists like the Sierra Club that cheered its broad ambition and references to a changed climate (E&E News PM, Aug. 16).

Meanwhile, Zinke over the past week has shrugged off the connections among human-caused emissions, rising temperatures and fire conditions. The fire season is getting longer, he said, but the blame for massive fires rests with "environmental terrorist groups" that sue to prevent forest thinning.

"Ryan, you’re saying it’s not a global warming thing; it’s a management situation," Trump said during yesterday’s Cabinet meeting, contrasting two options for dead and dying trees: "Instead of removing them — gently removing them, beautifully removing them — we leave them to burn."

Zinke replied that a historic amount of timber is rotting on forest floors, waiting to catch fire. Removing that wood deprives fires of fuel.

"Whether you’re a global warmist advocate or denier, it doesn’t make a difference when you have rotting timber," Zinke said, according to the White House transcript.

Thinning trees more aggressively is an idea with bipartisan support. But the way the administration has articulated it causes some heartburn.

"The problem is, when you take a good idea like that and you wrap it in a really bad idea, which is to ignore climate change, you’re almost guaranteed to get a bad result," said Jad Daley, president of the nonprofit American Forests.

California alone has about 130 million dead trees. Two of the past three years have seen the most acres burned since 1952, according to the Agriculture Department. Climate change bears part of the blame, along with increased development into wildlands and a century of suppressing the fire cycle that forests need to regenerate (Climatewire, Aug. 14).

Environmental groups agree that forests need to be thinned near buildings, but they’re wary of establishing incentives that could expand backcountry logging — a "cut-it-all-down approach," in the words of the Center for Biological Diversity’s Randi Spivak.

Thinning also offers the chance to replant trees acclimated to hotter, drier conditions. Sometimes that’s a different species; sometimes it’s just a different stock from farther south. Either way, it requires looking ahead to what the climate will be decades from now, Daley said.

"If you’re saying the climate’s the same and we can just keep replanting the forests that have always survived here, then you’re guaranteed to just be planting new firewood," he said.