Trump says Clinton will wage ‘war’ on all fossil fuels 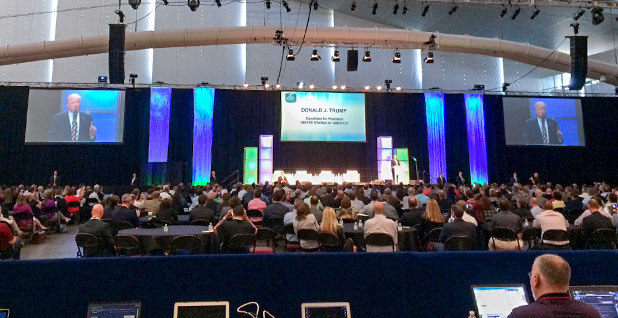 "She’s not only declared war on miners, it’s a war on coal, oil and natural gas production," Trump told more than 1,000 people attending the Shale Insight conference here. "It’s war … and you people know it’s war. It’s going to be worse under her than it’s been under President Obama."

Clinton’s proposal to put a monetary value on carbon emissions, Trump said, amounts to "political-speak for a massive new tax on coal and shale production — a tax on American consumers" that would make international competition more difficult and send business to countries unfriendly to the United States where environmental standards are lax.

He also accused the Democratic nominee, who declined to attend the industry event, of trying to ban hydraulic fracturing and energy production on public lands and most offshore areas.

The Obama administration, he continued, has held up multi-million-dollar energy projects from coast to coast. Citing a Wall Street Journal article, Trump said more than a dozen fossil fuel projects worth about $33 billion have been either rejected by regulators or withdrawn by developers since 2012, with "billions more tied up in projects still in regulatory limbo."

"Examples of energy transportation projects blocked or abandoned include an $850 million coal export facility in Washington, a $3 billion natural gas pipeline in the Northeast and a $6.8 billion liquid natural gas export facility, among others," Trump said.

Trumpeting his "America-first energy plan," Trump reiterated his threat to rescind the Obama administration’s coal mining lease moratorium and the "excessive" Interior Department stream protection rule, and to conduct a top-down review of all anti-coal regulations issued under Obama. He also promised to scrap the Waters of the United States rule and U.S. EPA’s Clean Power Plan for curbing carbon emissions from power plants.

"No other business has been more affected than your business by over-regulation," he said.

Trump promised he would refocus EPA on its core mission of ensuring clean air and clean, safe drinking water for all Americans.

"I believe firmly in conserving our wonderful natural resources and beautiful natural habitats," he said. "My environmental agenda will be guided by true specialists in conservation, not those with radical political agendas."

The host city for this week’s oil and gas conference, Pittsburgh, voted in 2010 to ban hydraulic fracturing. The practice is off limits in the Delaware River Basin covering portions of eastern Pennsylvania pending new regulations. A major state Supreme Court decision in 2013 affirmed that local governments can use zoning powers to control where development occurs.

Trump did not clarify his position today on hydraulic fracturing that’s raised eyebrows in the oil and gas industry. He said in August that states should be able to decide whether they want to ban the oil and gas extraction technique.

Trump laid out his energy platform earlier this year in North Dakota, where he cast Obama as impeding domestic oil and gas production with onerous regulations while fast-tracking permitting of wind and solar projects, claiming that a Hillary Clinton administration would make things "much worse."

In that speech, Trump vowed to lift a moratorium on fossil energy production on federal lands, revoke policies that impose "unwarranted restrictions" on new drilling technologies, scrap domestic and international climate goals, and review all regulations through the lens of whether the average worker benefits.

But Trump hasn’t said yet what regulations he would modify or lift to boost the industry.

During the Democratic presidential debates in March, Clinton said she wouldn’t support the practice if a locality or state was opposed, if the practice spewed heat-trapping methane or contaminated drinking water, or if companies don’t disclose what chemicals they use. "So by the time we get through all of my conditions, I do not think there will be many places in America where fracking will continue to take place," she said.

While Clinton declined to attend and did not appear to have any public events scheduled today, first lady Michelle Obama is slated to stump for the former secretary of State next week in Pittsburgh.

"Trump’s dirty-fuels-first plan is pretty simple: drill enough off our coasts to threaten beaches from Maine to Florida, frack enough to spoil groundwater across the nation, and burn enough coal to cook the planet and make our kids sick," Sierra Club Political Director Khalid Pitts said in a statement. "In stark contrast, Hillary Clinton is the only candidate in this race who is committed to grow the booming clean energy economy to create jobs and help tackle the climate crisis."

Rhea Suh, president of the Natural Resources Defense Council, in a statement said Trump’s "dirty energy agenda" is no surprise, calling it a wish list for big polluters.

"He’s their dream candidate," she said. "He would ignore climate change and allow damage to our air, land and water."