Trump says demand is back. But companies may not survive 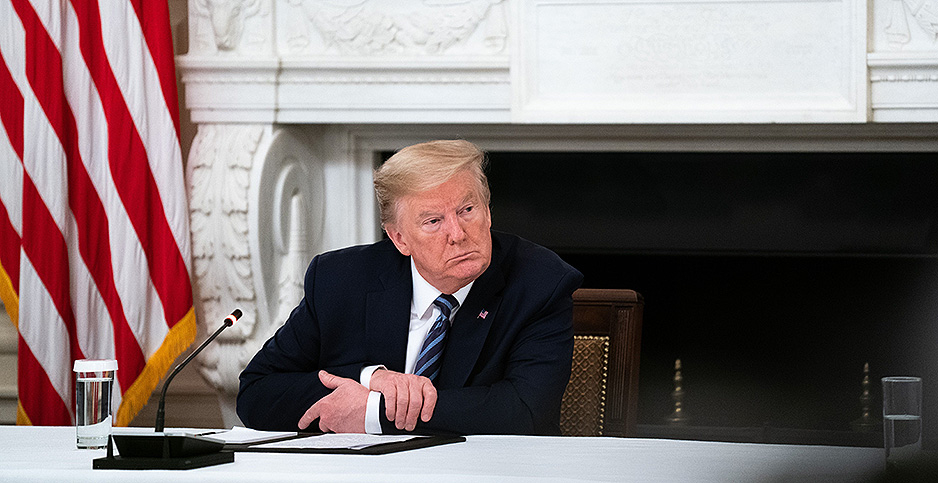 President Trump listened as he met with Republican members of Congress in the State Dining Room of the White House on Friday. Anna Moneymaker/CNP/AdMed/SIPA/Newscom

President Trump said Friday that oil "demand is coming back" even as industry analysts predicted that global oil production could collapse by the largest amount in history in the next three months.

Meeting with House Republicans on Friday, Trump seemed inclined to let markets spark a recovery as parts of the country reopen and demand for crude inches up despite the ongoing pandemic.

"You’re up to $25, $26 a barrel. And a little bit more, and you’re going to save your energy industry, really, because we’re No. 1," Trump told the group at a televised White House meeting, as he took praise for his role in a global agreement last month to cut oil production. "And Russia and Saudi Arabia, I got them together, and they came to a good conclusion for us and for them and for everybody. And once that demand goes up, it’s going to be great for the energy industry."

Separately, his senior advisers also indicated that negotiations may be on hold with Congress over another coronavirus aid package until the economic picture is clearer.

Yet Rep. Dan Crenshaw (R-Texas) told Trump at the White House that the country is in "real dire straits, with oil prices the way they are" and that Texas is "deeply worried."

"That’s like the best combination I’ve ever heard," Trump said. "I don’t think I’ve ever seen a combination like that. So it’s going to be very good. A lot of good things happening in energy."

The comments came as the consulting firm IHS Markit said in a report Friday that worldwide oil production will drop 14 million barrels a day in the second quarter ending June 30 — the largest quarterly drop ever. While the record retreat could push prices higher, it won’t immediately ease industry pain.

The top three U.S. crude producers are warning that the unprecedented price collapse could force them to lower their oil and gas reserves, an estimate of how much oil a company can drill profitably at the current price. The benchmark U.S. crude was selling for about $24 a barrel over the weekend, down from more than $60 a barrel at the beginning of the year.

Exxon Mobil Corp., for example, said in its quarterly report last week that the pandemic will shrink its proven reserves by the equivalent of 1 billion barrels.

The fallout could be worse for hundreds of smaller oil companies, some of which are also warning that their reserves could be affected, analysts said.

"There’s just not a lot of visibility on how things are going to turn out at the end of this," said Lysle Brinker, executive director of equity research at IHS Markit. "Some of these companies aren’t going to survive."

Restoring demand is the real challenge, said former White House energy adviser Mike McKenna. "Absent that, no one in the industry will survive," he said. "That’s the core of the problem for the administration in this instance as in others. If they ‘help’ an industry, they release some of the pressure to resume economic activity. If they don’t, they risk further economic dislocation."

Congress rejected Trump’s bid to help the industry by purchasing oil and storing it in the Strategic Petroleum Reserve, but the administration hasn’t given up, Department of Energy spokeswoman Shaylyn Hynes told E&E News in an email Friday.

"Secretary [Dan] Brouillette and DOE leadership are committed to fulfilling the president’s directive to fill and potentially expand the nation’s strategic petroleum reserve, and provide assistance to the American energy industry," she said. She noted that "subject to appropriations, DOE stands ready to execute the storage of up to 1 billion barrels of oil that it has been authorized by Congress to store."

But it’s uncertain whether that would happen amid partisan sparring in Congress. Though industry allies in the Senate have proposed legislation to spend $3 billion to fill the reserve, Democrats are pushing legislation that would seek to stymie efforts to aid the oil and gas industry, including barring new oil reserve purchases and blocking Trump from using emergency powers to direct loan guarantees (Energywire, May 6).

"Helping the oil industry preserve jobs has become a hyperpartisan issue," said Dan Eberhart, CEO of Colorado-based Canary LLC, one of the largest private oil field service companies in the nation and a Republican donor who has urged Trump to aid the industry by lifting tariffs on steel and other manufactured products that the industry uses. "What Congress needs to do is set aside its biases and help all of America’s energy companies, whether they produce oil and gas or electricity from solar and wind. These are all American jobs that are on the cutting block."

White House economic adviser Larry Kudlow also told reporters Friday that the White House has halted negotiations with Congress over any further coronavirus stimulus package until it sees the economic effect of a number of states allowing businesses to reopen.

"We just had another big infusion. We poured all this money in. Let’s see what happens," Kudlow said. "As we move into the reopening phase this month, maybe spill over to June, let’s have a look at it before we decide who, what, where, when."

After Trump insisted in a tweet last month that the administration would "never let the great U.S. Oil and Gas Industry down," the Federal Reserve revised a loan program making it easier for oil companies to seek assistance.

Treasury Secretary Steven Mnuchin has suggested that other lending programs may be possible, but none of them have emerged.

One form of Treasury loans that was discussed last month would have involved the federal government taking a stake in the companies, but Hynes told the Washington Examiner that "the Trump Administration is not taking equity positions in or nationalizing energy companies." She said reports to the contrary were "categorically false."

Jeff Kupfer, who served as an acting deputy secretary and chief operating officer at DOE under President George W. Bush, said further efforts to assist the industry could be complicated by Friday’s job report, which detailed massive unemployment across an array of sectors.

"People are seeing the extent of the devastation throughout the economy, and it’s pretty hard to make a persuasive case for any particular industry that they should begin to have all sorts of special programs, especially one that’s controversial," he said. The Federal Reserve lending takes away some of the sting, he said, "and anything going forward would be pricey and perhaps more controversial."

And he noted that production cuts have resulted in more stable oil prices — even if they remain low.

"The initial push where people were talking about specific ideas for oil and gas in some ways has come and gone," Kupfer said.

OPEC, along with allied countries such as Russia, agreed to trim its output by 9.7 million barrels starting this month. IHS Markit said almost every producing country, including the United States, will be affected. "Some will be impacted more than others. But there is nowhere to hide," the firm said. "All producing countries are subject to the same brutal market forces."

"The Great Shut-In, a rapid and brutal adjustment of global oil supply to a lower level of demand is underway," Jim Burkhard, vice president and head of oil markets at IHS Markit, said in a statement.

In the United States, the top three oil companies alone plan to cut their production by more than 600,000 barrels a day, and dozens of other companies have announced plans to slow down or shut in some of their oil fields as they struggle to trim spending.

Exxon said in its quarterly report that its 1-billion-barrel drop in reserves, from its year-end total of 14.8 billion barrels, was related to its $10 billion spending cut. Chevron Corp. and ConocoPhillips warned that similar drops could be coming.

"[Chevron] has made significant cuts to its upstream capital and exploratory expenditure program for 2020, which are expected to negatively impact future production and proved developed and undeveloped reserves," Chevron said in its report.

This isn’t the first time Big Oil has had to report lower reserves. It happened after the financial crisis in 2008 and 2009, and again when oil prices crashed between 2014 and 2016.

If prices remain low, the companies could be forced to declare impairment charges on their earnings. Exxon, for instance, took a $2 billion accounting charge in the fourth quarter of 2016 after the value fell for its dry natural gas fields in the Rockies.

Exxon and ConocoPhillips declined to comment. A spokesman for Chevron didn’t respond to written questions before publication.

The pain is also spreading to small and medium-sized companies that dominate the U.S. shale drilling industry. At least three companies — Pioneer Natural Resources Co., Diamondback Energy Inc. and Matador Resources Co. — warned that they could write down their reserves or declare asset impairments.

Pioneer said in its quarterly report that oil market volatility coupled with COVID-19 uncertainties mean "it is reasonably possible that the carrying value of its proved and unproved oil and gas properties or goodwill could be impaired."

The smaller companies often borrow against the value of their reserves, so they’ll feel a bigger impact from any potential write-downs, said Marianne Kah, a former oil industry economist who is now an adjunct researcher at Columbia University’s Center on Global Energy Policy.

The drops in reserves are another factor that could drive away potential investors in the oil and gas sector, which is the industry’s biggest problem, Kah said.

Activist investor groups like the nonprofit Ceres have been warning for years that oil companies are overvaluing assets like oil and gas fields.

As climate change forces the world’s economy to adopt lower-carbon energy sources, demand for oil is set to fall. The industry has argued that so-called peak demand won’t occur until the mid-2030s, but some companies have said the pandemic could permanently change people’s fuel consumption (Climatewire, May 7).

While this year’s oil shock is unprecedented, it shows that companies should be more conservative about the long-term prospects for oil prices, said Andrew Logan, senior director of oil and gas at Ceres.

"I think this is a bit of a dress rehearsal for what’s coming down the road," he said. "The downside scenarios that companies need to consider really have to change."