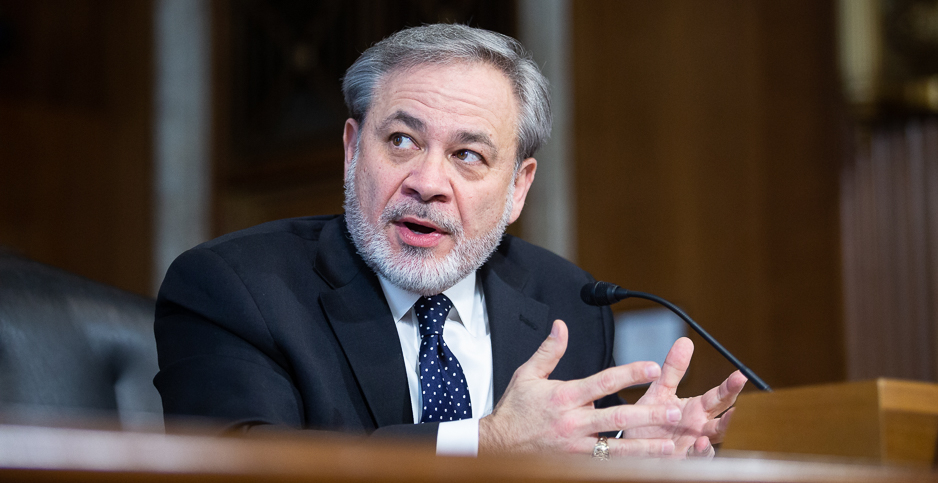 President Trump said yesterday that the oil industry is turning the corner, and his Energy secretary echoed the enthusiasm, insisting in two interviews that the industry is on the verge of what the administration calls a "transition to greatness."

"What we’re seeing in the markets today [is] stability, and that’s what’s important for these energy companies to survive this pandemic and to explode with economic activity on the other side," Dan Brouillette said in a Fox Business Network interview.

Similarly, Trump said on Twitter: "Our great Energy Companies, with millions of JOBS, are starting to look very good again. Transition to Greatness."

The sunny takes come as Trump pushes for states to drop stay-at-home restrictions from the COVID-19 pandemic and goose a moribund economy six months before the presidential election.

Yet four studies released yesterday carried warning signs for multiple energy sectors as the head of one of the biggest oil companies in the world said that the industry may never recover from the demand crash.

"I don’t think we know how this is going to play out. I certainly don’t know," Looney said. "Could it be peak oil? Possibly. Possibly. I would not write that off."

Demand for oil will recover to about 98% of its pre-pandemic level, but the progress will be chaotic and will depend on society’s ability to contain the coronavirus, consulting firm IHS Markit said in one of the reports. More than 1.3 million Americans have been infected with the virus, and at least 81,000 have died.

"Make no mistake, the road to oil price recovery will likely be choppy and plagued with stop-and-go rallies and selling cycles until some level of certainty is restored," Roger Diwan, IHS’s vice president of financial services, said in a statement.

Another report from DOE’s Energy Information Administration cast doubt on the sector’s ability to rebound, with many Americans worried about a return to work.

"The possibility of lasting behavioral changes to transportation and oil consumption patterns present considerable uncertainty to the increase in liquid fuels consumption, even with a significant increase in" gross domestic product, said EIA Administrator Linda Capuano.

EIA estimates that the consumption of global liquid fuels will average close to 93 million barrels per day in 2020. It expects consumption to increase in 2021 but to remain below the fourth-quarter 2019 average.

The consulting firm Brattle Group further reported it could be 2026 before oil prices hit their pre-pandemic levels (see related story).

Further in the future, the response to the virus could shape the industry in other ways. If governments provide large amounts of fiscal stimulus and develop an effective vaccine, oil consumption could surpass 110 million barrels a day by 2030, more than 10% above the pre-pandemic level, Wood Mackenzie said in a report.

Yet if governments adopt a "greener growth" approach that radically reduces emissions as part of the economic recovery, then oil consumption would stay flat through the 2020s and begin declining steeply in 2030, Wood Mackenzie said.

Brouillette told Fox he expects the low gas prices to help as Americans begin to venture forth from their homes after weeks inside. The Labor Department said yesterday that the consumer price index dropped 0.8% in April, but Brouillette said gas prices are down 20%.

"As the president has pointed out, that’s a tremendous tax cut for American consumers," he said. "And as we begin this transition, as we begin to reopen this economy, that’s going to be a boon for consumers all across the country."

In a separate Bloomberg Television interview, Brouillette said the industry was "starting to look really good."

"We’re on the verge of a transition to greatness, and we’re starting to see it," he added.

The EIA report shows "the economic boom that I think we’re just on the verge of seeing," Brouillette said, adding that he expects later quarters to be "very robust. The production will come back online as this economy continues to take off."

The three-member Texas Railroad Commission voted May 5 to reject a request that it set statewide production quotas to help small oil companies survive the downturn. The industry was already cutting production on its own because of free-market forces, Craddick said in an interview with The Texas Tribune.

The Trump administration has sought to aid the industry, with Trump last month helping to land a deal between Russia and Saudi Arabia to pull back global oil production. The Federal Reserve has revised a lending program so that oil and gas producers can access the loans, and Brouillette told Bloomberg TV that the administration had asked the central bank to modify the Main Street Lending Program to help struggling oil and gas companies.

Bharat Ramamurti, a member of the congressional commission overseeing bailout funds and a former aide to Sen. Elizabeth Warren (D-Mass.), noted on Twitter that the Federal Reserve changes "mirror" those sought by industry and that they raise "questions about how the changes promote the broader public interest."

The Department of Energy is also leasing producers space in the Strategic Petroleum Reserve to store excess oil, and a DOE spokeswoman last week said it remains committed to expanding the reserve if Congress were to give it the go-ahead.

Brouillette yesterday also weighed in on the coal industry, saying that he thought "there’s still a bright future" for it.

He told Fox that although the United States and other countries have edged away from the fuel for electricity, "there are other parts of the world where coal is a critical component to their electricity generation."

He suggested that there are growth markets in Asia and Africa, as well as "an important role for coal to play in the provision of critical minerals for the development of battery technologies as we go forward."

Trump has directed Brouillette and, before him, then-Energy Secretary Rick Perry to find new uses for coal, though analysts have suggested there is little the department will be able to do to resuscitate the industry, which has been battered by an abundance of natural gas and cheaper renewables.

"The future of energy in America is going to continue to be a diversity of supply," Brouillette told Fox. "We need all forms of energy. Wind energy, solar energy, they’re important components in the delivery of electricity all throughout the country. But it’s important that we maintain a diversity of supply, so we’re going to need natural gas; we’re going to need nuclear energy, as well. That’s what gives us the low prices: It’s the competition in the marketplace. It’s the choice that consumers have for the provision of their energy. That’s what forces prices down."

The coronavirus pandemic has worsened the industry’s already bleak outlook.

Over the last two months, wind generated more electricity than coal on at least three days, another sign of wind’s ascent and coal’s steep decline.

The EIA report noted that although stay-at-home orders are beginning to be relaxed, they are likely to continue to affect U.S. electricity consumption over the next few months. EIA expects retail sales in both the commercial and industrial sectors to fall 6.5% in 2020 because of business closures and cutbacks in industrial output.