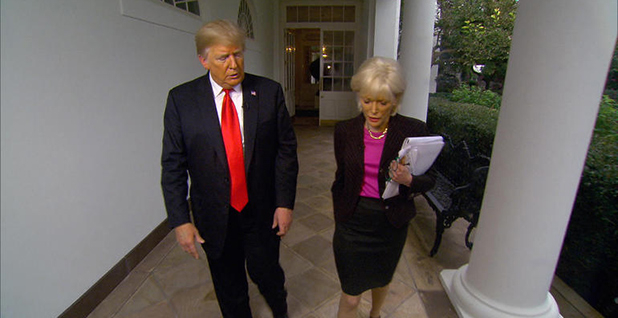 The president backed off previous assertions that global changes from greenhouse gases are a hoax, even as he renewed his claims that many climate scientists are politically motivated.

Trump tweeted in 2012 that climate change is a hoax perpetrated by the Chinese to gain an economic advantage. He also called it "bullshit." In December 2015, he repeated those claims. "So Obama’s talking about all of this with the global warming and the — a lot of it’s a hoax, it’s a hoax," Trump said then in South Carolina. "I mean, it’s a money-making industry, OK? It’s a hoax, a lot of it" (Climatewire, March 21, 2016).

Trump has sought to dismantle a series of climate regulations imposed by the past administration. His EPA replaced a rule on power plants that was set to limit carbon dioxide emissions with a weaker proposal. He’s overseeing a suggested freeze on vehicle efficiency and rolling back programs to reduce methane at oil and gas wells.

"I’m not denying climate change," Trump said last night. "But it could very well go back. You know, we’re talking about over a … millions of years."

Lesley Stahl of CBS News pressed Trump about sea-level rise, hurricanes and how his views go against the findings of government scientists.

Stahl: "I wish you could go to Greenland, watch these huge chunks of ice just falling into the ocean, raising the sea levels."

Trump: "And you don’t know whether or not that would have happened with or without man. You don’t know."

Trump: "We have scientists that disagree with that."

Temperature records kept by NASA and NOAA show that the world hasn’t had a cooler-than-average year since 1976 or a cooler-than-normal month since the end of 1985.

Trump, who is scheduled today to visit areas of Georgia and Florida damaged by Hurricane Michael, also expressed doubt over scientists’ findings that link the changing climate to more powerful hurricanes.

"They say that we had hurricanes that were far worse than what we just had with Michael," said Trump, who identified "they" as "people" after being pressed Stahl.

She asked, "What about the scientists who say it’s worse than ever?" The president replied, "You’d have to show me the scientists because they have a very big political agenda."