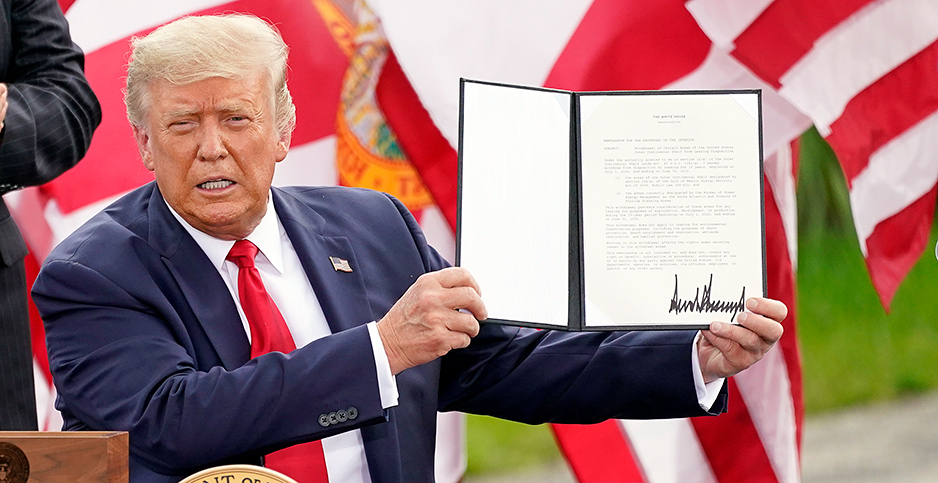 It was an unprecedented action for his administration — one that will reverse Trump’s own 2017 proposal to open nearly the entire U.S. coast to drilling rigs at the request of oil and natural gas proponents.

"The contrast between our vision and the radical left has never been more clear. They talk a big game, and they do nothing," he continued. "That’s really what it is, too. They talk and talk. The environment, they talk and talk — nothing happens, it’s all talk. It’s all words and no action."

Critics cite among Trump’s greatest offenses since entering office in 2017 his withdrawal from the Paris climate agreement, the rollback of greenhouse gas standards for cars, his undoing of President Obama’s Clean Power Plan and his support for drilling in the Arctic National Wildlife Refuge.

He’s installed industry lobbyists and allies in key government positions, sidelined scientists, and made it more difficult to protect imperiled species. These actions, they say, can and will hurt Trump in November.

"If President Trump wanted to protect the state’s beaches and waters from destruction, he would deep-six his five-year leasing plan to open up every coast in the country for drilling," said McCarthy, who served as the EPA administrator from 2013 to 2017, when Biden was vice president.

"The best way to protect Florida’s coasts — and our children’s future — is to vote Trump out of the White House and Joe Biden in," she added.

"Thanks to my administration’s pro-American energy policies, we can take this step and the next step while remaining the No. 1 producer of oil and natural gas anywhere in the world," Trump added.

But regardless of the reasons behind Trump’s decision, he might have just upended Democratic talking points.

"Why sign an executive order [that can be reversed] when you can pass a bipartisan law to ban drilling off Florida’s shores?" Mucarsel-Powell tweeted. "I don’t trust Trump, esp. When we’ve already seen his plan for offshore drilling starting after the election. This is temporary, self-serving and weak."

It’s not yet clear how this argument will play with voters.

Trump has also complicated the political dynamics inside his party’s own reliable base.

As Democrats sought yesterday to remind the public that Trump was looking to cover his failed environmental record with a belated fig leaf, stakeholders in the oil and gas industry were struggling with how to respond to an action they oppose by an administration with which they’d been largely friendly.

Lem Smith, the American Petroleum Institute’s vice president of upstream policy, called it the "wrong move at the wrong time."

Ultimately, Trump’s move yesterday represents one of the biggest policy reversals of his presidency.

In 2018, as part of his "energy dominance" agenda, Trump’s Interior Department proposed allowing drilling in the eastern Gulf and along the entire Pacific and Atlantic coasts, as well as all around Alaska.

By 2019, Interior Secretary David Bernhardt said the plan was on hold, blaming a ruling in Alaska’s federal court that said the administration couldn’t undo Obama’s ban on Arctic Ocean drilling — which used the same authority Trump used yesterday. Administration attorneys are still appealing that ruling, claiming such bans are not binding on future presidents.