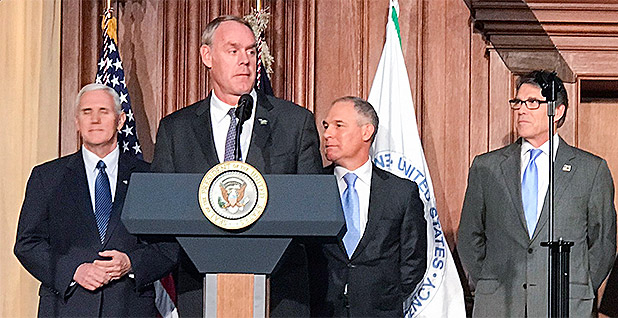 One of the Trump administration’s first acts this year was to end a moratorium on coal leasing to appease an industry that rallied behind the new president.

But six months later, the number of company applications to extract federal reserves and the amount of public coal in play have dropped, according to Bureau of Land Management records.

The president campaigned on reviving coal’s fortunes by stripping Obama-era restrictions, but despite a modest overall mining comeback, leasing has yet to pick up.

Neither coal companies nor their critics are surprised as an industry fresh off a historic downturn adjusts to a new, smaller normal.

But the BLM numbers puncture the argument from the president and his defenders that the Obama administration’s three-year moratorium — meant to allow the Interior Department to study reforms — wrought havoc on mining communities.

Since March 29, when Interior Secretary Ryan Zinke officially reversed the ban, the number of pending leases and lease modifications has fallen from 41 to 40.

The amount of coal under consideration for lease dropped from 2.8 billion tons to 2.4 billion tons, BLM records show.

In March, Zinke promised to process lease requests "expeditiously" (Greenwire, March 20). However, nearly two-thirds of the coal that remains in play is — as it was six months ago — tied to applications that companies asked to put on hold, waiting for better market conditions.

In six months, the mining industry has filed only one new lease application. Peabody Energy Corp.
is requesting 4.1 million tons of federal coal to expand its Twentymile
mine in Colorado.

With roughly 20 years of coal at current production levels already under lease, Contura declined to pursue the application when asked by BLM in June.

After a similar agency inquiry related to the nearby Buckskin
mine in May, Kiewit Corp.
withdrew a 167-million-ton application. The company had waited three years "in hopes that the coal market would improve."

Companies have not only backed out of pending applications. They have also relinquished coal that was already under their control.

The leasing contraction follows the crash in U.S. coal production from more than 1 billion tons nationwide in 2014 to 728.2 million in 2016, largely driven by cheap natural gas fueling more power plants.

With more than 90 percent of U.S. coal burned for electricity, the power shift has had a particular effect on leasing because federal coal — roughly 40 percent of the national total — almost exclusively generates electricity.

The Powder River Basin of Wyoming and Montana, the source of nearly 90 percent of all federal coal, has been especially hard hit. Since 2012, BLM has not leased a single ton of coal in Wyoming, the nation’s top coal mining state.

Despite the weak demand, when the Obama administration imposed its moratorium in January 2016, the Wyoming delegation led the revolt in Congress.

"This ban was devastating," Rep. Liz Cheney (R-Wyo.)
said on behalf of her bill to require congressional approval for all future moratoriums (E&E Daily, July 28).

In a March memo obtained by the anti-coal-leasing group WildEarth Guardians,
Nedd wrote that although former Interior chief Sally Jewell
"believed that the public and the coal program would benefit from imposing the leasing moratorium" pending scrutiny, "that benefit is outweighed by the economic hardship placed on the industry."

Federal data, however, suggest the moratorium had little or no impact on leasing.

The moratorium did not apply to already-approved applications, but with demand low, BLM only offered one tract: 56.6 million tons in Utah.

The Greens Hollow
offering was approved during the Obama presidency, but Zinke got to finalize the sale and hailed it as "a sign of optimism."

Since then, the administration has approved one lease for Lighthouse Resources Inc.
to access 9.2 million tons of coal to expand its Black Butte
mine in Wyoming.

"There are enough leases out there to go at least another decade without anybody having to lease any more coal," said Wood Mackenzie
Research Director Daniel Rusz.

In 2010, major companies stocked up by leasing more than 2 billion tons of coal. And when it issued the moratorium, Obama’s Interior made the case that 20 years’ worth of coal was already under lease.

Bucking the negative trend, despite posting a $27.1 million loss thus far this year, Cloud Peak Energy Inc.
welcomed the chance to resume pursuing leases near its three mines, all in the Powder River Basin.

Rusz said companies are starting the leasing process much further in advance because environmentalists have turned every step into a dogfight. Greens Hollow took more than a decade to sell.

Among the pending applications are two leases that have been approved only to be challenged by "keep it in the ground" champions WildEarth Guardians.

The group is gearing up to fight two leases Interior has put out for public comment under Trump: Cloud Peak’s application to expand its Antelope mine and Peabody’s Colorado request. WildEarth Guardians is also taking issue with the administration’s most recent approval at Black Butte.

"We are very concerned that BLM is going to be short-cutting its analysis and public involvement and that we could see these leases railroaded through," WildEarth Guardians climate and energy campaigner Jeremy Nichols
said.

The battle goes on, but the moratorium was largely irrelevant, Rusz said.

"There hasn’t been any near-term need to get any new leases, in the Powder River Basin that is, and so it really hasn’t had that much impact at all for planning purposes," he said.

Peabody’s North Antelope Rochelle
mine and Arch’s Black Thunder
site — both of which mine 15 percent of U.S. coal — have enough fuel locked down to last them until at least 2030, said Wood Mackenzie analyst Gregory Marmon.

"There are very few companies that need coal leases after that," Marmon said.

Wood Mackenzie forecasts that after a short reprieve in the next few years, production will start to fall as natural gas prices decline further early in the next decade.

Wood Mackenzie says mines that produce coal with less energy content will be the hardest hit by lower gas prices. Sites that can product 8,800 British thermal units per pound, like North Antelope Rochelle and Black Thunder, will be better off than Contura’s Belle Ayr mine, whose coal generally produces 8,400 Btu per pound.

In February, then-acting BLM Director Kristin Bail
was looking at how to "spur coal mining" in the U.S. but said there was only so much the government could do, according to another memo obtained by WildEarth Guardians.

Nichols said, "At the end of the day, the metrics that matter are whether you are leasing coal. And if this administration isn’t leasing coal, then they are failing."