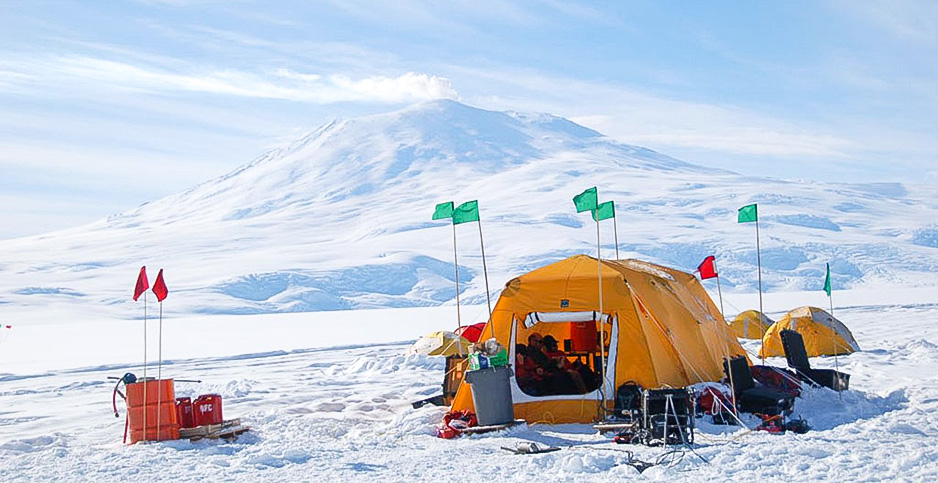 Scientists sheltering in a tent at a base camp on Antarctica. The Trump administration is proposing deep cuts to climate research. NASA

The Trump administration wants to eliminate a broad swath of the nation’s climate change research infrastructure, including satellites, education programs and science centers.

Though it has little chance of being enacted, the Trump administration’s budget proposal unveiled yesterday targets hundreds of millions of dollars in climate science, renewable energy research and climate mitigation efforts across a variety of federal agencies, including NASA, NOAA, U.S. EPA and the departments of the Interior and Energy.

The new White House proposal calls for a reduction in climate research at NASA, including a 6 percent cut to earth science programs for fiscal 2019. The budget request calls for an overall funding increase of more than 2 percent at NASA, which would have a $19.9 billion budget.

The NASA budget request calls for an end to financing for the International Space Station and a push to encourage private investment in that work, but Democrats and Republicans in the Senate have said that is a non-starter. Increasing privatization of the space industry has been a priority of congressional Republicans as well as Vice President Mike Pence — who chairs the revived National Space Council — over the last year.

Once again, the administration has proposed eliminating a number of climate-related satellite programs, including the functions of some already in orbit. The total savings would be $133 million for the five missions, including the Plankton, Aerosol, Cloud, Ocean Ecosystem (PACE) mission, which is scheduled for a 2022 launch. As with most satellites, PACE has multiple functions and can be used to forecast harmful algal blooms, which have plagued the Great Lakes in recent years. Trump’s proposal would also eliminate the Earth-observing abilities of the Deep Space Climate Observatory, which was proposed by then-Vice President Al Gore and also measures solar storms.

"We can’t do everything, and as always, we’ve had to make hard choices, but we will continue to forge new paths and partnerships that strengthen our industrial base and our engagement with other nations to achieve challenging goals that advance our capabilities and increase our security and economic strength," acting NASA Administrator Robert Lightfoot said in a statement.

At NOAA, the budget would be trimmed 20 percent, by about $1 billion, to $4.6 billion in 2019. The White House called for the elimination of $273 million in grants, something that congressional appropriators have also rejected. Those include the National Sea Grant College Program, the National Estuarine Research Reserve System, coastal zone management grants, the Office of Education and the Pacific Coastal Salmon Recovery Fund.

The Interior Department’s chief science agency would take a major hit under the proposed budget. The U.S. Geological Survey is the lead federal agency in providing science and mapping on ecosystems, energy and mineral resources, water use and natural hazards like earthquakes and volcanoes. It would receive just under $860 million, about a 20 percent decrease from funding levels enacted for fiscal 2017. The White House’s proposal is $62 million less than it asked for last year to fund USGS (see related story).

The budget request includes $13 million to fund only three of the eight regional climate science centers and one national climate adaptation science center — the others would presumably close. That is $4.4 million less than the administration allocated in its fiscal 2018 budget proposal and less than half of what Congress enacted for fiscal 2017. Established by Congress in 2008, the climate science centers develop science and tools to help land managers address climate change-related impacts to land, water, fish and wildlife, and cultural sites.

All other climate change research at USGS would be renamed under the new "land resources" program, formerly the "climate and land use change program."

Boosts thanks to the budget deal

The phrase "climate change" only appears once in the narrative summary of Trump’s budget request, and that is for the proposed elimination of the Climate Change Research and Partnership Programs at EPA. However, there are some areas where climate-related research is supported. For instance, U.S. facilities in Antarctica would be upgraded through a $2.2 billion funding package that is part of the congressional budget deal reached last week.

"These activities prioritize robust science, refocusing EPA’s research and scientific analysis to inform EPA policy and regulatory development actions, and creating consistency and certainty that outlines exactly what is expected of the regulated community to ensure good stewardship and positive environmental outcomes," the budget request read.

On the climate front, EPA would continue to implement renewable fuel provisions under 2005 and 2007 energy laws and would "ensure compliance" of regulations aimed at reducing emissions from "highway and non-road sources." The agency would also continue to track greenhouse gas emissions nationally and has suggested maintaining the popular voluntary Energy Star program (see related story).

Some of the Trump administration’s targeted reductions in climate research could be offset by the bipartisan spending plan reached by lawmakers last week.

For example, the White House plan includes a request for the National Science Foundation to receive a 30 percent cut, but that request was amended after the congressional spending plan was agreed to last week. In an addendum to its budget, NSF would receive $7.5 billion, which would keep its funding flat compared with 2017 levels.

Similarly, the Department of Energy’s science programs would have seen a 22 percent reduction under the White House proposal, but the funding amount was updated to $5.4 billion, which means they would essentially remain flat.

Under Trump’s plan, DOE’s Advanced Research Projects Agency-Energy — a high-tech research division that has worked on more durable solar cells and lighter batteries — would be eliminated, although that is not likely to happen. Senators advocated for record levels of funding for ARPA-E for fiscal 2018.

"Budgets are about priorities, and a close examination of this year’s request shows the direction we’re seeking to lead the department," Energy Secretary Rick Perry said in a call with reporters yesterday. "Budgets are also about making difficult choices, but it would be a mistake to judge our view of the merits of any program solely on a one-year budget request."

Rep. Eddie Bernice Johnson (D-Texas), ranking member of the House Science, Space and Technology Committee, said the plan shows that the Trump administration has no appreciation for the role that research at federal agencies plays in driving the economy or protecting the environment and public health.

"When I was first briefed on ‘highlights’ of President Trump’s budget request, I was incredulous at its treatment of our federal science agencies," she said in a statement. "The only good thing about this budget is that it’s so extreme, I have no doubt that it will be summarily rejected by both sides of the aisle."