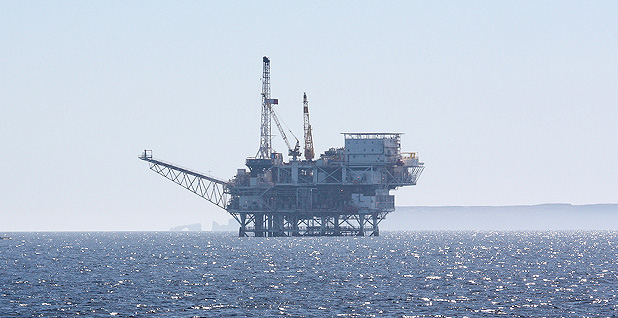 An oil platform in the Santa Barbara Channel. Is there more offshore drilling to come for California under a President Donald Trump? Photo by Ken Lund, courtesy of Flickr.

President-elect Donald Trump pledged to increase oil and gas drilling and "unleash an energy revolution." If he wants to do it in California, he’ll hit obstacles that could take years to surmount, experts said.

Drilling both offshore and on federal land requires crafting a detailed plan and surviving environmental reviews. And in the Golden State, there’s a major political hurdle. California has fought fiercely against attempts to increase offshore drilling, with Democrats and Republican lawmakers uniting on the issue.

"California is a daunting place," said Mark Delaplaine, the California Coastal Commission’s manager of the energy ocean coastal resources unit. "We’ve had more than one administration salivate over the idea of drilling off all of California, and it hasn’t happened. You have to look at history and say, ‘This is going to be difficult.’"

The Trump transition team did not respond to requests for comment on his plans and whether he would include California in the push for expanded oil drilling. On his transition website, Trump says that he will "open onshore and offshore leasing on federal lands, eliminate moratorium on coal leasing, and open shale energy deposits."

It’s not clear how much oil companies would want to pursue drilling in California and push the Trump administration to allow new leasing. Oil companies typically want the security of knowing they will be able to proceed without numerous obstacles. In California, that’s not the case, several said. Additionally, the low price of oil has depressed interest, said Athan Manuel, director of the lands protection program at the Sierra Club.

"This industry is in flux," Manuel said. "Just because the Trump administration wants to do it, economically we’re not sure companies are champing at the bit to have new areas leased to them."

Rock Zierman, CEO of the California Independent Petroleum Association, or CIPA, said in an email that "we have major production currently on [Bureau of Land Management] onshore land and that can certainly increase." He said companies would be interested if leases became available.

In the case of offshore drilling, Trump would need to deal with a recent Obama administration legacy. Obama’s Interior Department just issued its final five-year plan for leasing from 2017 through 2022. After a 60-day congressional review period, the agency’s director likely will formally adopt it. That would make it law a few days before Trump is inaugurated.

Trump could decide he’s going to throw it out and pursue more drilling in the Atlantic Ocean, off California and off Alaska. But he would need to launch and go through a formal review, and that process takes several years. His administration would need to complete environmental studies to support going in a different direction from the Obama plan, said a person familiar with federal drilling, who asked not to be identified to speak freely.

Obama’s draft leasing plan did contemplate additional drilling off Alaska and in the Atlantic Ocean. That means there would be relatively less work involved in expanding drilling in those locations. But the Obama plan didn’t do that for California, so extensive studies and new findings would be required to include the Golden State in a new five-year leasing program, he said.

"California, though, would be a big hill to climb," he said. "It has not been a part of leasing programs for many years."

Any new Trump administration offshore leasing plan would be subject to review by the California Coastal Commission, which oversees activities affecting 1,100 miles of coast. The Trump administration would need to tell the commission its federal leasing plan was consistent with the California Coastal Act, a tough protection law. The commission could say yes or no, or negotiate changes, and ultimately could go to court to stop the plan from proceeding, said Delaplaine with the commission.

"We have not had a difficult time justifying that leasing offshore California has been for the most part inconsistent with our coastal protection laws," Delaplaine said. "It’s not a difficult case to make. That’s a hurdle that they would have to face."

Some drilling is allowed offshore in the Santa Barbara Channel. There are 23 platforms in federal waters in that region. But the agency likely would disagree with a new plan seeking additional offshore drilling, he said.

"The risks to coastal resources are just limitless, the risk of oil spills, the risk of air quality impacts," Delaplaine said. "There’s a whole litany of effects on California that drilling in a new area brings into play."

Even when the political makeup of the commission has changed over the years, its position in the issue has stayed consistent, he added. "They’ve been generally united about concerns about offshore oil drilling," Delaplaine said. "These are almost always unanimous votes."

Trump is unlikely to get help from Congress, either. For decades, both Democratic and Republican lawmakers from the state have opposed offshore drilling, supporting residents who don’t want oil derricks obstructing coastal views. Sen. Pete Wilson (R-Calif.) in the 1980s led a fight against it during the George H.W. Bush administration. Several said that bipartisan approach is unlikely to change now, even with a Republican-controlled White House and Congress.

"It’s been known as kind of a third rail of politics," allowing new oil drilling off California, said Ann Notthoff, California advocacy director for the Natural Resources Defense Council. "The coastal economy of California is critical. It’s very valuable. The costs of threatening that with oil drilling has long been thought to not be worth it."

Zierman with CIPA said that in terms of offshore drilling, "new platforms are very unlikely." But oil companies can drill directionally from one of the existing platforms to an adjacent lease. That’s a way of getting a new lease and tapping new resources without installing a new platform, he said.

On federal lands in California, allowing more drilling theoretically would be easier than offshore, but that hasn’t worked out as desired for the Obama administration.

After Trump’s inauguration, his Interior Department could launch the effort to hold new lease sales. But that process probably would take two years, said Manuel with the Sierra Club.

Environmental groups have stopped recent efforts to increase drilling on federal land, Siegel with the Center for Biological Diversity said. Those challenges under the National Environmental Policy Act, or NEPA, said there had been insufficient environmental review, she said.

CBD and the Sierra Club in 2013 won a challenge against a lease sale by Obama’s Bureau of Land Management along the state’s central coast. This year, CBD and Los Padres ForestWatch prevailed in a case against BLM’s resource management plan for the Bakersfield region. Both times, the court found that BLM had failed to sufficiently analyze the risks of fracking.

"There has been no leasing since 2013 because of these legal victories," Siegel said.