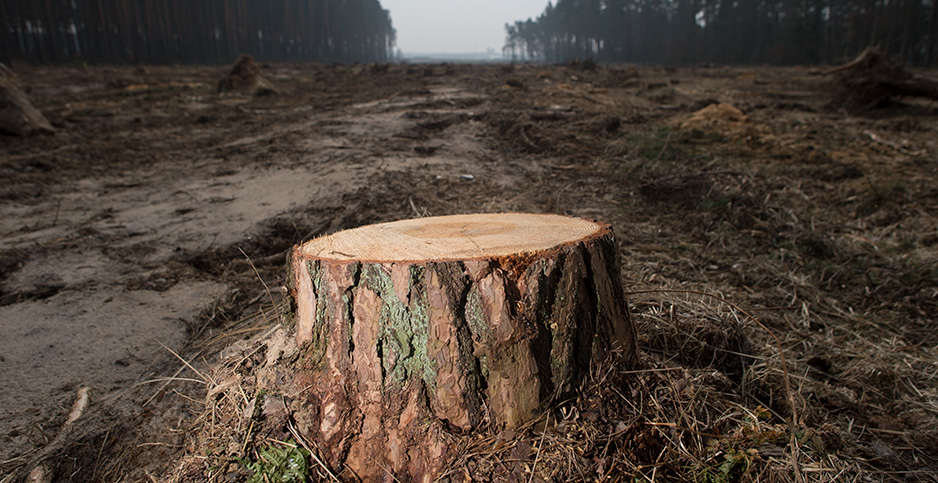 Habitat destruction poses a major threat to species around the globe. Climate change is exerting even more pressure on wildlife. Klaus-Dietmar Gabbert/dpa/picture-alliance/Newscom

Ranchers shot and poisoned prairie dogs to make room for their cattle, but now they’re suffering desertification that’s tied to the species’ disappearance.

Sea otters still haven’t recovered from fur hunting, leaving their prey free to mow down underwater seabeds of kelp along the coast of California.

Oregon’s deer mice have survived the changes that drove away other wildlife. Now they’re spreading a tick-borne virus that causes deadly lung problems in humans, because those other species are gone.

This is what Earth’s sixth mass extinction looks like, scientists say. It’s an interlocking series of pressures that can amplify one another while affecting people in unpredictable ways.

It’s also the backdrop to the Trump administration scaling back the Endangered Species Act.

As many as 1 million species of plants and animals are in danger of extermination in the coming decades, according to a U.N. panel of scientists.

The damage is already revealing itself. Today, many populations are functionally extinct. They are diminished from their historic ranges to the point that the ecosystem acts as if they’re gone.

The Trump administration is finalizing regulations that could make it harder to protect wildlife at a time when scientists say the threats against it are growing. Habitat loss continues apace, while climate change is predicted to increase pressure against species as temperatures climb.

"This is very well-established now. There are very few [scientists] who don’t think we’re in a mass extinction," said Gerardo Ceballos, a renowned biodiversity researcher from the Universidad Nacional Autónoma de México.

The world has about 20 years left to preserve wildlife as we know it today, he said.

"You name it, all the animals that 10 years ago were fine, [like] orangutans and so on, are now in danger," Ceballos said.

Scientists broadly agree that the pace and scale of human-driven extinctions are thousands of times higher than in past centuries, though some do disagree with using the term "mass extinction."

A conservative estimate of the fossil record suggests Earth normally loses about two vertebrate species per 10,000 each century. That’s called the background extinction rate, and humans have completely eclipsed it.

About 470 vertebrate species disappeared in the 20th century, according to a 2015 study published in the journal Science Advances.

In other words, humans squeezed as much as 10,000 years of extinctions into just a century.

Scientists warn that this century promises to be worse.

The population began to plunge in the 1980s, and fewer than 100 moose remained in northwest Minnesota by 2007. Counts by helicopters gave way to more intensive methods: The phones of state officials would light up when a moose’s radio collar went still, so they could rush into the field to autopsy each beast.

What they found defied easy answers. Some were brought down by tens of thousands of winter ticks, gorged to the size of marbles on moose blood. Seemingly healthy animals had fallen dead from brain and liver parasites, some transported to the area by newly arrived deer. Wolves, roaring back from the brink of extinction themselves, killed many, too.

Scientists found a pattern: Warmer summers were associated with more dead moose. The exact cause is still debated, but the trend line was clear. By midcentury, the researchers said, "the northwest Minnesota moose population likely would not persist."

The Fish and Wildlife Service declared that the northwestern Minnesota moose might merit protections under the Endangered Species Act. A final decision was supposed to have come within 12 months.

Now, 37 months later, the review is scheduled to wrap up after September — meaning the moose will likely have to satisfy the Trump administration’s new rules.

Plants and animals are considered threatened when they’re at risk of becoming endangered "in the foreseeable future." The administration wants to limit what counts as foreseeable future, and only consider factors it deems "probable," according to its proposed changes to the Endangered Species Act.

The administration says it’s codifying a long-standing practice, but advocates worry that it would help the feds argue there’s too much uncertainty to protect some species (Climatewire, July 2).

The climate isn’t the biggest pressure on moose. But preliminary models suggest a tipping point could come in about 30 years, when moisture and temperature patterns could shift dramatically, said Ron Moen of the Natural Resources Research Institute at the University of Minnesota, Duluth.

Those models might not carry enough weight under the proposed rules. The feds can choose where in a model’s timeline the data becomes unreliable, according to the draft regulations published last year.

Other climate-sensitive creatures might face an additional hurdle. Species harmed by sea-level rise or melting glaciers, but not other habitat threats, might be denied protections under the proposal.

Threatened species usually enjoy the same protections as endangered ones when being killed, injured or disturbed by people. The administration wants to end that for new listings. The Fish and Wildlife Service would have to undertake an individual rulemaking for each newly threatened species before it gets protections (Greenwire, July 20, 2018).

That means that if the northwestern Minnesota moose do get listed as threatened, they might have to wait even longer for some protections. Administration officials say they’ll try to do both simultaneously, but the draft rules don’t require it.

Conservationists and some scientists say the administration is trying to make it harder to protect at-risk species, especially those most harmed by climate change.

"These are petty, silly, intellectually vacuous attempts to gut legislation, and to do so because people want to make money," said Stuart Pimm, a Duke University researcher who specializes in extinctions.

The Endangered Species Act has long been a target of conservatives, especially from the West, who say it overburdens property owners, for negligible benefit to wildlife.

The Fish and Wildlife Service says it will continue evaluating species according to the best available science, and officials dispute that the new rules would make it harder to protect at-risk species.

"Laughable," then-Deputy Interior Secretary David Bernhardt said last year when asked whether the administration is gutting the law. Most aspects of the regime will remain the same, he said.

The service considers five factors in listing a species: habitat loss; overkill by people; disease and predation; existing protections; and any other man-made or natural threat.

"Environmental standards are not changing. What’s changing is… how we go about making our decisions, potentially in less burdensome ways," said Bernhardt, who is now the department’s secretary.

Bernhardt says the new rules will speed up listing decisions and interagency consultations by standardizing the process. Others worry that the opposite will happen.

There’s already a long backlog of species the Fish and Wildlife Service is considering listing, and it will get worse if the service has to create a special rule for every new one that’s deemed threatened, said David Hayes, deputy Interior secretary under the Obama and Clinton administrations.

More delays and weaker protections could cause permanent damage, even if the new rules prove temporary.

"These regulations, if they survive judicial review, presumably could be subject to another rulemaking and be fixed [under the next president]. But what are we talking about? We’re talking about three or four years, probably," Hayes said.

In the meantime, the mass extinction will continue to build.

Habitat loss and overexploitation are the two biggest pressures on wildlife. But climate change looms on the horizon.

About 5% of all species could be at risk of climate-related extinctions if warming reaches 2 degrees Celsius, according to the United Nations. The world has already warmed about 1 degree.

In many cases, climate change will exacerbate the pressures bearing down on wildlife.

Black-tailed prairie dogs, already gone from 95% of their historic range, fare poorly in summers that are too hot and dry, as well as springs that are too wet, researchers said in a 2017 study published in Global Change Biology. That could be a problem in a climate with more extreme swings in rain patterns.

And in Maine, researchers are racing to understand how a warming ocean will affect the remaining 400 North Atlantic right whales, which depend on plankton that’s sensitive to changes in ocean currents and temperatures.

Warmer, saltier water is driving away the whales’ food. Scientists understand the process, but they’re still trying to predict how the whales would react to ongoing changes, said Jeffrey Runge, a researcher at the University of Maine.

"[These whales] are sentinels; they’re indicators. They’re telling us that the Gulf of Maine ecosystem is changing," Runge said.

Officials can help the whales by addressing lobster fishing and shipping lanes, he said, but the climate-related threat will remain.

"The driving force really is the CO2 increase," he said.

"It’s very alarming. My efforts are more and more to see what I can do to just point out that it’s immediate — we need to do something about CO2 levels rising," Runge said.