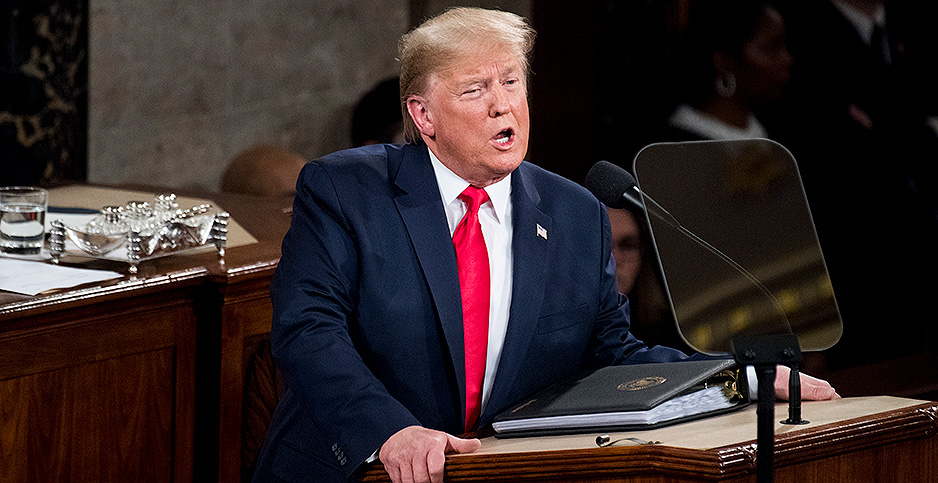 President Trump in his State of the Union address last night left out any mention of the coal industry that candidate Trump pledged to revive, as the industry struggles for footing amid a surge in cheaper and cleaner sources of energy.

Trump also barely mentioned energy in a speech that focused more on the economy, manufacturing and trade. When he did mention energy three times, the emphasis was on the administration’s oil and gas record.

"Thanks to our bold regulatory reduction campaign, the United States has become the No. 1 producer of oil and natural gas anywhere in the world, by far," he said to applause.

He boasted that thanks to the "tremendous progress we have made over the past three years," the U.S. is now energy independent and energy jobs are at a record high.

"We are doing numbers that no one would have thought possible three years ago," he said.

It has largely credited the U.S. shale boom that has driven production up since 2011, not deregulation or any other new effort by the Trump administration.

And energy experts have challenged Trump’s claim that the U.S. is energy independent, pointing out that the United States still imports oil, including from the Middle East.

This was the second year in a row Trump didn’t mention coal in his State of the Union address. That contrasts with his first address to Congress in 2017, when he promised that his administration would "stop the regulations that threaten the future and livelihood of our great coal miners." In 2018, he bragged that he’d "ended the war on clean coal."

Coal plant closures, though, have accelerated under Trump, who pledged on the campaign trail and as president to revive coal, directing a rollback Obama’s clean power regulations.

Still, industry groups say Trump was successful in removing what they saw as regulatory impediments affecting coal. His new Energy Secretary Dan Brouillette said in December that Trump has "directed" the department to find new ways to utilize coal.

"The president can’t control every aspect of the economy, and natural gas is cheap and abundant," said Tom Pyle, president of the American Energy Alliance that backs the fossil fuel industry. "You can’t fault him for trying."

Pyle said Trump’s energy record provides him with a clear distinction between his Democratic challengers, nearly all of whom support some version of the Green New Deal that Pyle’s group says would lead to soaring energy costs and power outages.

Trump, who boasted last night of shepherding a "great American comeback," can point to his withdrawal of the United States from the Paris climate accord and recent attempts to overhaul the National Environmental Policy Act, Pyle said.

Yet Betsy Monseu, the CEO of the American Coal Council, said before Trump’s speech she hoped to hear him talk about the role of coal in the U.S. energy portfolio.

"Coal continues as an essential resource to keep America’s lights on 24/7/365 and electricity bills affordable and stable," she said.

It was apparent well before Trump’s remarks that the coal industry had not recovered as he had promised on the 2016 campaign trail, said Ari Drennen, press secretary for the left-leaning Center for American Progress Action Fund.

"He likes to take credit where he can, but he doesn’t want to remind voters of a promise he’s been unable to fulfill," Drennen said.

Drennen said the 2018 midterms that gave Democrats control of the House of Representatives also revealed a potential vulnerability for Republicans who downplay a man-made role in climate change. Since then, Trump’s remarks on the environment — though not his policies — have been tempered, she said.

"There’s been a real effort to paper over his environmental record and claim he is delivering for the environment, but when you look at his policy agenda, it’s a giveaway to supporters in the oil and gas industry amid action to cut bedrock environmental regulations," she said of Trump.

While Trump kept his remarks on energy short last night, they earned plaudits from industry advocates and Brouillette, who noted that the U.S. is exporting liquid natural gas to 37 countries.

"Under President Trump’s leadership, it is innovation, not regulation, that drives our energy success," Brouillette said.

"What matters more is not what President Trump said in his lie-laden State of the Union address, it’s what he didn’t say," said Sen. Edward Markey (D-Mass.), citing climate change and clean energy among the subjects that Trump steered clear of.

"We can count on Donald Trump to extol the virtues of dirty fossil fuels but to ignore the potential of wind, solar and energy efficiency," Markey said.

Trump last month called rising seas and temperatures a "very serious subject," even as he announced plans to change environmental policy rules to make it easier to build gas pipelines and other projects. In the past, he has called climate change a Chinese hoax.

Earlier this week, he announced the U.S. will join the Trillion Trees initiative to plant new trees, a plan he gave a nod to in the speech, calling it an "ambitious effort."

Drennen noted Trump’s remarks come as polls suggest voters are increasingly concerned about climate change. More than 1 in 5 caucusgoers in Iowa said climate change was their top priority, according to a preliminary entrance poll conducted by Edison Media Research for The Washington Post and other media organizations.

"A declining number of people want to use it, and that’s a good thing," Freed said. "And so it’s hard, particularly for a president who only focuses on his perceived success and only talks to his base. … [I]t’s a difficult topic for him to then talk about."

In 2018 — the same year Trump said that the "war on clean coal" had ended — the fossil fuel made up nearly 28% of U.S. electricity generation, according to the U.S. Energy Information Administration. It was forecast to decline to 21% in 2020 and to even less in 2021.

But the National Mining Association — one of the country’s most prominent mining trade groups — said in advance of Trump’s speech that coal remains the leading source of fuel globally and that Americans want the U.S. to take the lead in developing coal and emissions-reduction technology.

"The Trump administration has made significant progress in returning balance to the regulatory landscape and has taken important steps to encourage responsible mining," said the group’s President and CEO Rich Nolan. "Americans want those steps forward to continue."

Nolan said a poll conducted by the association found that 63% of respondents agreed that the U.S. should take a leadership role in developing carbon capture technology to reduce emissions in the U.S. and overseas.

He said polling the group had conducted showed 72% of respondents believe it is "important to maintain an all-of-the-above energy approach that includes coal, natural gas, renewables and nuclear power."