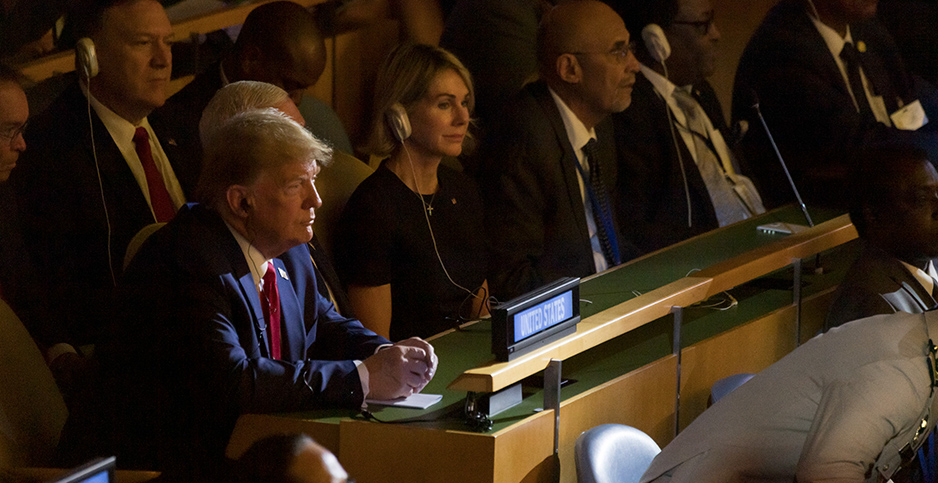 In recent days, President Trump connected climate change to Texas flooding and briefly attended a U.N. climate summit he was supposed to skip.

It’s a soft recognition from a president who has mocked climate science at every turn that openly denying evidence of temperature increases could be a political liability as he prepares for reelection next year, according to observers. Polling has shown increased climate concern among some Republican voters, especially in the suburban districts that cost Republicans control of the House in the 2018 midterm elections.

Trump might have been influenced by coverage of climate change on cable news, which he uses as a "barometer" of public opinion, said one former administration official. He could also be hearing about recent polling that shows Republican vulnerability on climate, particularly in places like Florida, where several Republican lawmakers openly talk about the risk of sea-level rise and other climate impacts, the former official said. In addition, Jared Kushner, Trump’s son-in-law and a White House adviser, pushed the president to address environmental issues more directly, culminating in a rare speech from Trump, in July, on the virtues of conservation, the source said.

"There’s a narrative out there that says the president doesn’t listen, but in reality he’s always kicking the tires on assumptions that he’s made," said the former administration official. "Even though he may think he’s right, he doesn’t dismiss the possibility that he’s made the wrong assumptions."

Yesterday, Trump stopped by the U.N. General Assembly to briefly attend the Climate Action Summit. He didn’t speak but was seen leaning forward in an aisle chair as Prime Minister of India Narendra Modi spoke from the stage. Trump was seated next to Vice President Mike Pence and other Cabinet officials. He was also with newly confirmed U.N. Ambassador Kelly Craft, whose personal wealth derives in part from her family’s coal business. Craft recently said there were "good scientists on both sides" of the climate debate.

Trump later told reporters that he went to the climate summit to promote clean air and clean water.

"All countries should get together and do that," Trump said. "And they should do it for themselves."

Trump plans to withdraw the United States from the Paris climate agreement, in which almost every other country in the world pledged to reduce carbon emissions through a voluntary reduction system.

On Sunday, on his way to visit a community damaged by flooding in Texas, Trump connected the inundation to climate change.

Members of Congress who are in vulnerable districts are pushing the White House to change its messaging on climate change, the former official said. The small steps from Trump in recent days could be a sign that he’s listening to them, according to the official.

But that acknowledgment of climate change can rankle some hard-line opponents of climate science who feel burned by Trump’s refusal to establish a panel to review the findings in the National Climate Assessment. The architect of that plan, former National Security Council senior director William Happer, resigned earlier this month.

"I have already seen the campaign influence the White House in a very unfortunate direction, namely in getting the Happer climate review delayed indefinitely," said Myron Ebell, who headed Trump’s transition team at EPA. "It should be happening right now."