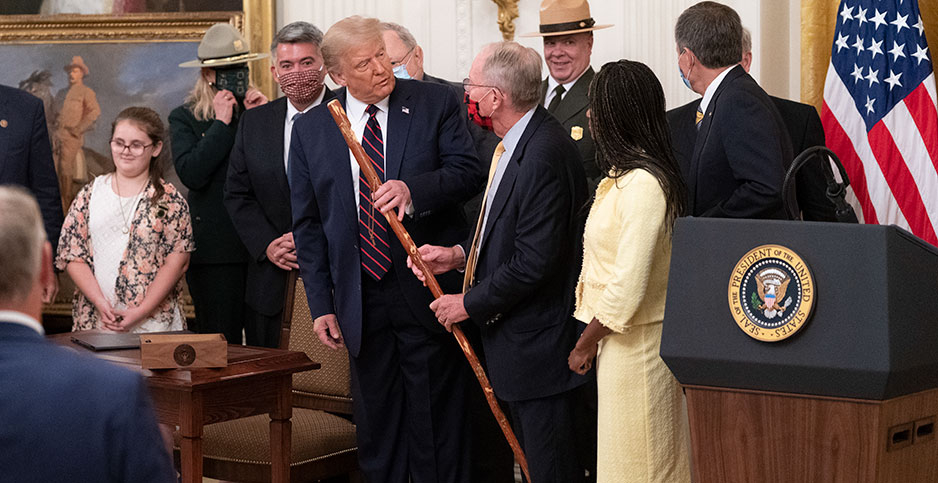 President Trump signed H.R. 1957 in the East Room of the White House this morning, flanked by lawmakers and administration officials who had gathered to celebrate the event.

For the first time since the Land and Water Conservation Fund’s creation in 1964, the program will be fully and permanently funded at $900 million annually, the yearly allocations no longer left to the whims of congressional appropriators.

The new law also will create a five-year trust fund to start driving down a nearly $20 billion backlog of deferred maintenance projects at national parks and on public lands around the country.

The bill cleared Congress over the course of a single month in a breathtaking show of bipartisan unity at a time of partisan toxicity, motivated by a sense that acting on this measure would be a political win for members of both parties so close to the November elections.

But the apparent ease with which the Great American Outdoors Act passed both chambers of Congress — 73-25 in the Senate, 310-107 in the House — belies the fact that the legislation’s enactment represents the culmination of literally decades of efforts to guarantee dedicated resources for large-scale, long-term conservation efforts (E&E Daily, July 23).

"This is a very big deal from an environment standpoint and from the beauty of our country standpoint," Trump said from his podium today. "There hasn’t been anything like this since Teddy Roosevelt, I suspect."

Yet rather than nod to the diverse coalitions that had worked to make this day a reality — the conservation advocates and the outdoor recreation industry, the animal rights proponents and the hunters and fishers, the liberals and the conservatives — the Trump White House chose to make the signing ceremony a celebration of Republicans.

Trump spent a good part of his remarks listing off the ways his administration had helped protect "windswept prairies" and "towering mountains" and "proving we can protect our treasured environment without bludgeoning our workers and crushing our businesses."

"People don’t necessarily associate us with that, but I think they probably will have to start at some point," he said. "They’ll have to start thinking about the Republican Party and all of the incredible things we’ve done on conservation and many other fronts."

And instead of including some of the Democrats who championed the legislation on Capitol Hill — and indeed Democrats outnumbered Republicans in voting in favor of the Great American Outdoors Act in the House and the Senate — only GOP lawmakers were invited to attend the East Room event.

"Unless there was a miscommunication, he and other Democratic sponsors were not invited," Sam Runyon said on behalf of her boss, Sen. Joe Manchin (D-W.Va.), the ranking member of the Senate Energy and Natural Resources Committee and a lead sponsor of the legislative package. "It’s a shame since it has been a strong, bipartisan bill from the start."

Trump handed the vast majority of credit to Sens. Cory Gardner of Colorado and Steve Daines of Montana, two of the chamber’s most vulnerable Republicans who more cynical political observers say were the reason Senate Majority Leader Mitch McConnell (R-Ky.) allowed the bill to come to the Senate floor in the middle of a pandemic.

"I can just say, as a side note, they would call me all the time," quipped Trump of Gardner and Daines, "and I would say, ‘Would you guys stop calling me so much?’ They wanted to get it done."

Gardner and Daines did make the last-ditch push to secure Trump’s support for the bill earlier this year, resulting in a supportive tweet that gave Republican leaders cover to devote time to the legislation.

Interior Secretary David Bernhardt suggested Trump should shoulder the bulk of the credit: "Only one president has got it done. And that is you."

The optics of the event caused grumbling among some outside groups that are loath to give the Trump administration a pass on what it considers an abysmal track record on the environment.

"Make no mistake, this bill is great news for the future of our parks and public lands, but no thanks to President Trump," said Center for Western Priorities Policy Director Jesse Prentice-Dunn.

"He tried for years to eviscerate the Land and Water Conservation Fund before finally flip-flopping. Now he is signing a landmark conservation bill thanks only to public demand and strong congressional leadership that resulted in veto-proof bipartisan majorities."

But Gardner at one point did give shoutouts to Manchin, Democratic Sen. Mark Warner of Virginia and Sen. Angus King, a Maine independent who caucuses with Democrats, for joining with Republicans "in the midst of acrimony, in the midst of partisanship."

Bernhardt also nodded to Sen. Lamar Alexander (R-Tenn.), a retiring lawmaker who was calling for fully funding the LWCF since he was Tennessee’s governor in the mid-1980s.

Meanwhile, absent Democrats didn’t hold back from celebrating from the sidelines and making sure people knew they played a part in the achievement, too.

"I was proud to see President Trump sign my bipartisan Great American Outdoors Act into law," Manchin said in a statement shortly after the event’s conclusion.

The office of Rep. Joe Cunningham of South Carolina, one of the election cycle’s most endangered House Democratic freshmen and a lead sponsor on his side of the Capitol, emailed out a press release with a subject line broadcasting a similar message: "President Trump Signs Cunningham’s Great American Outdoors Act into Law."