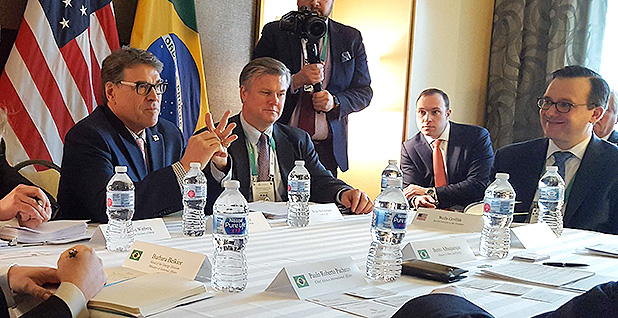 Yesterday, Energy Secretary Rick Perry went on CNBC in Houston to tout the innovation coming out of the national laboratories.

Back in Washington, D.C., President Trump was proposing to cut the Office of Science — which oversees the national labs — by more than $1 billion in fiscal 2020 from current levels.

While that contradiction probably won’t matter much on paper, it creates a bit of an awkward dog-and-pony show for Cabinet members and political appointees who are expected to publicly praise the president’s budget that proposes to all but tank their departments, or at least slash touted initiatives. Perry, for example, has toured the national labs and repeatedly praised their research.

"The president always puts out a budget that, one, is balanced and, two, outlines his priorities and, three, is meaningless," said Frank Maisano, senior principal at Bracewell LLP, an energy-focused firm. "Congress will do what it wants with it."

While Maisano argued that this spectacle has occurred to some degree during each administration since the budget process became law in 1974, others say Trump has completely upended and changed the process.

"They just made a decision that their budgets are going to be iconoclastic and stake out political territory," said Paul Bledsoe, now a strategic policy adviser at the Progressive Policy Institute. "And not worry about whether they influence on the final amounts."

"Mulvaney’s politics have bought into that approach," he said.

Perry — who was in Houston yesterday for the annual energy conference CERAWeek — tweeted that the budget "supports @ENERGY’s vast mission in a fiscally responsible way, and makes clear that success will be measured not by the dollars spent but by the results achieved on behalf of the American people."

Presidential budgets are phone book-size documents that serve as a way for the executive office to showcase priorities. Many of the notable proposed cuts, including in energy, are expected to be largely restored later, or to even increase above current levels, when Congress passes its spending bill.

"We used to say budgets were dead on arrival. This one was dead before it arrived," said Bledsoe. "I think it undermines their credibility."

In the coming weeks, Trump’s Cabinet secretaries will be forced to appear before lawmakers. The hearings are expected to be more contentious than usual this year because Democrats now control the House.

Of Trump’s 11 percent proposed cut to the Energy Department from current levels, programs hit the hardest would be the clean energy loan program and Advanced Research Projects Agency-Energy. Both are targeted for elimination.

Yesterday, senior DOE officials emphasized to reporters that budgets are "about priorities" and "about making difficult choices." They also made the argument that DOE performance is not just about funding levels.

"As Secretary Perry has said repeatedly, success at DOE will not be judged by how much money we request for a program, rather it is going to be judged by how well and efficiently each program manages their resources that have been entrusted to them by the American taxpayer," a DOE official said on a conference call with reporters.

This dynamic has especially played out at DOE’s Office of Energy Efficiency and Renewable Energy (EERE), which has jurisdiction over efficiency standards and renewable and transportation research.

Fossil research at DOE — which includes carbon capture work Perry has supported — would decline by more than 20 percent under Trump’s plan.

Given Trump’s past budgets, the slashing of programs was expected but could linger as a topic in congressional hearings for a long time to come. After the weatherization program was zeroed out in Trump’s plan for fiscal 2019, EERE chief Daniel Simmons told lawmakers that "my office worked diligently, as soon as funds were provided [by Congress], to carry out the mission of that office," he said at a House hearing last week.

When pressed about the budget a week prior, Simmons told E&E News he was confident he would still have a job. "There will still be an office to head," he said, adding that the budget process "has been interesting the last two years."

Simmons, who was confirmed by the Senate earlier this year, said because he was in "nomination limbo" for some time, he was almost entirely left out of internal budget talks. "I have made my arguments internally, and we’ll see how that comes out in the budget," he said.

Environmentalists know the Trump budget process is largely dead on arrival. But they’ve seized on the opportunity to declare his budget to be horrendous for efforts to curb greenhouse gas emissions.

Jason Hartke, president of the Alliance to Save Energy, said it would "take an ax to innovation in our energy sector, cutting critical research funds and energy efficiency investments that have a proven track record of reducing energy costs for consumers and businesses."

He said that even if the endgame is a negotiation tactic, "that is a major threat."

"These programs are among the smartest investments the federal government makes, and we should be making them stronger, not cutting them," he said.

Budget season is not the only time Trump has sent messages that contradicted his political appointees or didn’t seem to back up his administration’s programs.

In one example, Trump mocked global warming online in late January, tweeting, "What the hell is going on with Global Waming [sic]? Please come back fast, we need you!"

Energy officials were preparing the next day to announce funding to support two carbon capture technologies.

"The United States will remain a strong global voice for [carbon capture and storage]. I expect that we will be more involved than ever," Steven Winberg said at the Atlantic Council (Energywire, Jan. 29).