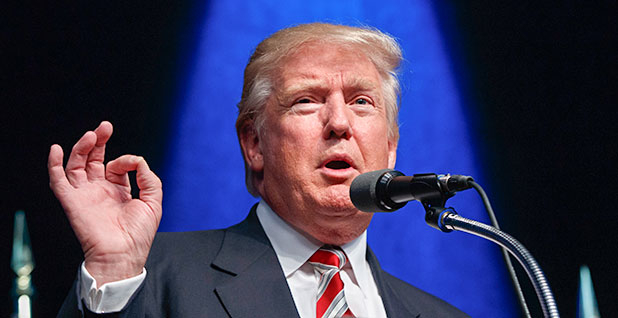 The offices of several Democrats who play key roles on the environment suggested that the House chamber will be brimming with members of Congress, in contrast to the scores of Democrats who boycotted Trump’s inauguration.

Tonight’s address stands to give lawmakers a close look at the man whose views on man-made warming and other issues have prompted them to oppose his Cabinet picks, threaten legislation and criticize his remarks about women.

Aides to several House Democrats in the Climate Solutions Caucus, a bipartisan group of 24 lawmakers who say humans are responsible for rising temperatures, said there’s been no organized move to skip Trump’s first address to the legislative branch.

Some members are staging subtle protests by inviting guests who draw contrasts to Trump’s policies on immigration, gay rights and health care. Climate doesn’t seem to be a high priority.

Rep. Ted Deutch (D-Fla.), a co-founder of the climate caucus, invited Lauri Major Tillman, a constituent whose grandson, Jackson, was born without the ability to breathe on his own. President Obama’s health care law helped the family receive medical help costing over $1 million in the first four months of Jackson’s life, according to Deutch’s office.

The congressman said he believes it’s important to raise the importance of health care at a time when Trump is working with Republican lawmakers to reverse Obamacare, an aide said.

Others are keeping it in the family. Rep. John Delaney (D-Md.), who introduced legislation for a national carbon tax in the last Congress, is inviting his wife. Delaney is a member of the climate caucus, also called the "Noah’s Ark" caucus.

Other Democrats have reportedly discussed giving the president the cold shoulder when he makes his way through the crowd toward the speakers’ rostrum, to avoid having pictures taken that show Democrats reaching for one of the least popular incoming presidents on record.

Trump might see his first prime-time speech as president as the right time to show a brighter side of himself. He plans to strike optimistic themes around economic opportunity and strengthened security against terrorism, according to two senior White House officials who spoke to reporters yesterday.

"It’s fair to say this is a look forward," said one of the officials.

The speech is titled "Renewal of the American Spirit," and it touches on the themes of financial distress that Trump voiced through the election campaign. Among them is the steep decline of the coal industry.

"A lot of what went into this speech came from the sit-downs and the listening sessions that the president has done over the last several weeks, specifically with health care industry leaders, law enforcement officials, coal miners, union representatives and front-line workers," the official said.

The address will begin with some showmanship. Trump plans to provide a list of campaign "promises made and promises kept," to showcase the number of jobs that have been created since he was elected.

"Americans have been waiting for help from their leaders for too long, and during the speech, the president will let them know that help is finally on the way," one of the officials said.