Trump splits from other G-20 leaders on climate change 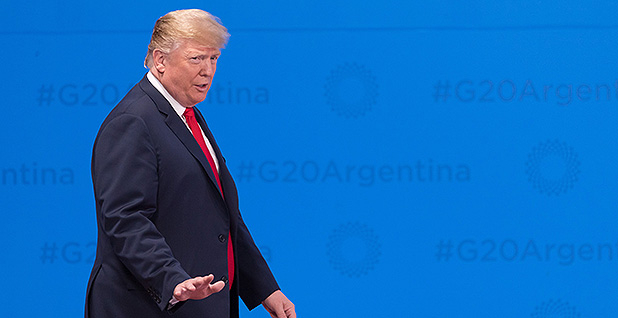 President Trump was the only world leader at the Group of 20 Summit in Buenos Aires, Argentina, to not sign on to a statement endorsing the Paris Agreement. Jacques Witt/SIPA/Newscom

Countries led by France and China succeeded in isolating President Trump this weekend at the Group of 20 Summit in Buenos Aires, Argentina.

The statement by those countries reads: "We will continue to tackle climate change while promoting sustainable development and economic growth."

The 19 members of the G-20 apart from the United States all also signed last year’s action plan at the group summit in Hamburg, Germany, which was held one month after Trump announced that the United States would withdraw from the Paris accord and abandon its commitment to it. The G-20 plan bolstered the Paris deal and reaffirmed countries’ determination to see it through implementation.

Earlier drafts of this year’s communiqué omitted mention of Paris altogether, a move proposed by an Argentinian presidency wary of angering the American president. But in negotiations that went on all night Friday, French President Emmanuel Macron and Chinese President Xi Jinping prevailed, adding language to the final draft that showed the U.S. president was alone — again — in rejecting the deal.

"The United States reiterates its decision to withdraw from the Paris Agreement, and affirms its strong commitment to economic growth and energy access and security, utilizing all energy sources and technologies, while protecting the environment," states the communiqué.

Whereas last year’s Hamburg declaration included a U.S.-only pledge to "endeavor to work closely with other counties to help them access and use fossil fuels more cleanly and efficiently," this year’s declaration has no specific reference to fossil fuels — even in the U.S.-only section.

The United States, though, joined its partners in taking note of this October’s landmark Intergovernmental Panel on Climate Change report, which found that warming must be kept to 1.5 degrees Celsius to avoid catastrophic effects.

"We recognize the importance of comprehensive adaptation strategies, including investment in infrastructure that is resilient to extreme weather events and disasters," said all parties, including the United States.

"In this sense, we support actions and cooperation in developing countries, especially those that are particularly vulnerable, including small island states, such as those in the Caribbean."

The G-20 members also say they "discussed" long-term low-greenhouse-gas development strategies and even the Talanoa Dialogue, a session to be held at the Katowice, Poland, climate talks that kick off today. The dialogue is aimed at increasing the ambition of national commitments to the Paris Agreement in 2020, after the United States is slated to pull out. State Department career official Judith Garber will participate in the forum for the United States.

The end result does less to single out the United States than last year — but also less to trumpet the use of conventional energy sources. That appears to be a French innovation. The French fought last year to keep the fossil fuel language out of the final statement; this year’s wording suggests they won.

Some greens applauded the G-20’s refusal to ignore Paris, saying the language would send a positive signal to Katowice, where negotiators over the next two weeks face the difficult task of completing implementation guidelines for Paris.

"Other G-20 leaders have reaffirmed their support for the full implementation of the Paris Agreement, heeding the urgent warning from the world’s scientific community that much greater efforts to decarbonize the global economy are needed if we are to avoid truly catastrophic climate impacts," said Alden Meyer, strategy director for the Union of Concerned Scientists. "Now these leaders must back up their words with strong actions."

But Nathaniel Keohane, who leads the Environmental Defense Fund’s climate program, saw some evidence that the United States might have watered down the group’s reference to the IPCC report, changing it from an endorsement to a taking "note," which he called "about the weakest verb possible."

References to the Katowice talks and Talanoa are "milquetoast," he said, "since they don’t specify what success or engagement means."