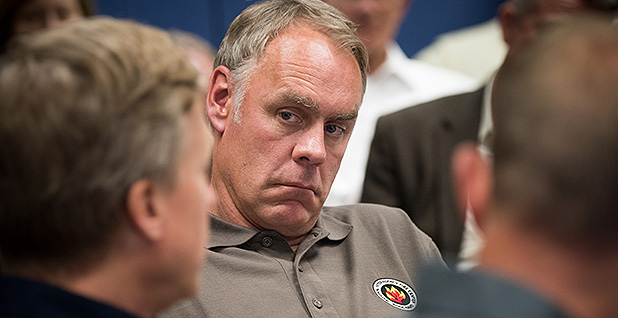 "Energy independence" is out, and "energy dominance" is in.

Trump administration officials are using a new term to describe America’s energy policy that aggressively pushes past the decades-old aspiration in the United States to break free from its addiction to imported energy.

On Friday, Energy Secretary Rick Perry was the latest administration official to opine on "energy dominance."

Following an announcement that for the first time, the United States had successfully shipped liquefied natural gas to the Netherlands and Poland, Perry tweeted, "The United States will use our resources to advance energy security. This is another step toward #EnergyDominance."

Interior Secretary Ryan Zinke has also been a major supporter of the burgeoning phrase, citing it in multiple speeches and even using it in testimony to House appropriators last week.

It appears both officials draw their inspiration from candidate Donald Trump. In his first major energy policy speech, Trump told a crowd in North Dakota last May that he was thinking "bigly" about fossil fuels.

"American energy dominance will be declared a strategic, economic and foreign policy goal of the United States," he said. "It’s about time."

Academics and energy experts struggled to define what actualizing "energy dominance" would look like and cautioned that such a brusque policy stance could destabilize America’s position on the global stage. Industry groups, on the other hand, expressed excitement about the new direction and stressed the importance of having a liberal democracy like the United States leading on energy policy.

With the United States currently producing record levels of oil and gas due to the hydraulic fracturing revolution — a recent U.S. Energy Information Administration report projected the country could be energy independent by 2026 — some experts speculated that the new term is less a policy prescription and more a linguistic manifestation of a president who values "winning" at all costs.

The new term supplants "energy independence," a decades-old phrase and de facto energy policy of the United States that took hold during the gasoline crisis of 1973.

Every president since Richard Nixon has lauded "energy independence" as the goal, but Peter Shulman, an associate professor at Case Western Reserve University and an energy historian who researched the term’s origin, found that the catchphrase didn’t originate in the White House — or even as a political expression.

Carroll Wilson, an eccentric Massachusetts Institute of Technology professor with a defense and nuclear background, coined the term. Shulman found "energy independence" first appeared in a speech Wilson gave to the Council on Foreign Relations in the early spring of 1973, before OPEC imposed an oil embargo against the United States in retaliation for its decision to support the Israeli army during the Arab-Israeli War.

Wilson, a technocrat, proposed increasing investment into technology and energy infrastructure as a way to tamp down rising gas prices.

"He was focused on the effects of this crisis on consumers," Shulman said. "Invest in new ports, new facilities, use engineering to become energy independent."

Then OPEC cut off oil exports to the United States.

"Basically, once the OPEC embargo hits in October, all of a sudden, President Nixon is out there talking about ‘Project Independence,’ his big plan for making the country energy independent by 1980, which sounded very similar to what Carroll Wilson had been taking out," Shulman said.

Nixon’s program fizzled, and within months, he was out of office. President Ford soon spent much of his tenure dealing with energy issues. So did President Carter.

"Everybody’s talking about energy independence, and the phrase just continues in use," Shulman said.

But as Wilson’s phrase gained recognition, it also took on a political agenda deeply rooted in protecting America’s national security and providing a lever to push back against growing environmental regulation, said Meg Jacobs, a research scholar at the Woodrow Wilson School of Public and International Affairs at Princeton University.

Today, America is as close as it has ever been to reaching "energy independence." According to EIA data, the United States is on track to export 1 million barrels of oil a day. In the 1970s, the United States was importing about one-third of its energy needs. By the time the first Gulf War hit, imports had jumped to nearly 50 percent.

Jacobs views "energy dominance" as a rebuke to the oil dependence of the ’70s, a way to reassert America’s position as a "winning" superpower — a concept central to Trump’s ideology.

"In a way, what ‘energy dominance’ looks like is a frank recognition … of the fracking revolution that has allowed the U.S. to be the chief player on a global stage," she said. "The linkage between the assertion of American dominance in energy and dominance as a superpower linked to a broader anti-government, America-first agenda, none of that surprises me."

Jacobs added, "This is the articulation of where Trump has been all along."

Dan Naatz, senior vice president of government relations and political affairs with the Independent Petroleum Association of America (IPAA), agreed that fracking has changed the calculus for the United States, calling the proliferation of shale energy over the last 10 years "phenomenal."

"It’s had huge impacts on American security, the economy, jobs, and now you’re starting to see the impact it could have on the world," he said.

While "dominance" is not a word Naatz said IPAA would use, he said the trade group has embraced the sentiment behind the language shift. The world benefits when the United States is a major energy producer and can act as a "balancing force" against Russia or the Middle East, he said.

"It’s important for the U.S. to be an energy superpower," he said. "It’s a good thing to have a country that is dedicated to free markets and free trade and dedicated to opening up new markets."

Shulman at Case Western Reserve University pushed back against that assertion, arguing that it’s not clear that being an energy exporter makes a country secure. The negative connotation associated with "dominance" could further alienate foreign allies, many of which are already reeling from the United States’ shift away from climate action. It could also create tension with U.S. trading partners, he said.

"Frankly, I have to chuckle when I hear it, because it just doesn’t make any sense," said Maximilian Auffhammer an environmental economist and professor at the University of California, Berkeley. "The word dominance is not generally used in a good context, and it always means there’s a big person on the playground shoving around a smaller person."

Auffhammer described another way in which the United States could be energy dominant with little political fallout: leading in clean energy technologies.

Many of Trump’s Cabinet secretaries have said the administration supports an "all of the above" energy strategy; however, the White House’s proposed budget seeks deep cuts to U.S. EPA and Energy Department programs that invest in renewable energy technology.

DOE’s Office of Energy Efficiency and Renewable Energy faces a 70 percent cut under the proposal, and programs that support early stage research and development, like the Advanced Research Projects Agency-Energy, are targeted for elimination.

"We’ve developed the new solar technologies, new technologies for storage," Auffhammer said. "Instead of going back to old technologies, I’d like to see them use this term in a forward-looking manner."