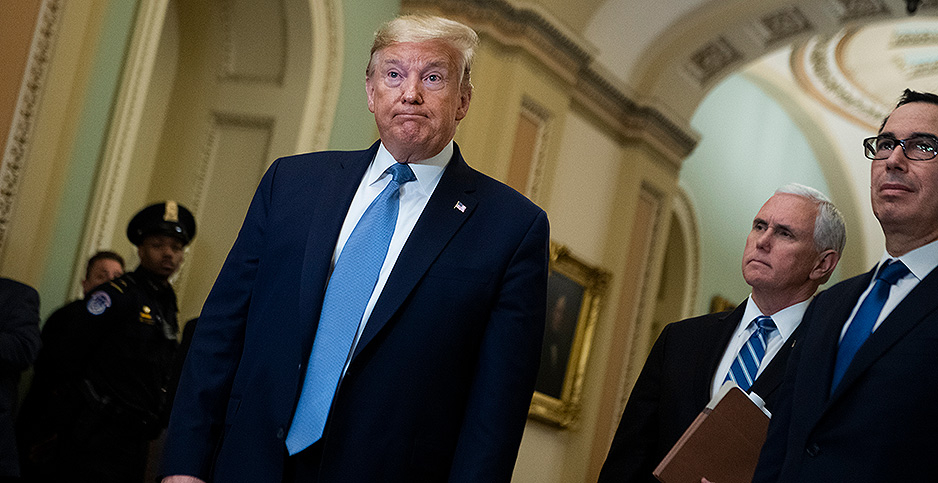 Congress isn’t yet ready to back any of the economic stimulus ideas being floated by the White House, especially aid for the energy sector that has experienced a downturn due to both the new coronavirus and the ongoing war over oil pricing.

President Trump made a rare appearance on Capitol Hill to pitch Republican senators on a variety of ideas for juicing the economy, including payroll tax cuts and targeted relief to some industries.

During the luncheon meeting, Senate Energy and Natural Resources Chairwoman Lisa Murkowski (R-Alaska) said Trump spoke of assistance for several sectors, including airlines and cruise ships, but not specifically for the oil industry.

There was no talk of an idea being weighed by the White House that would offer federal assistance in the form of low-interest government loans to struggling shale companies whose lines of credit to major financial institutions have been limited (E&E News PM, March 10).

However, there was discussion about the "price war" between Russia and Saudi Arabia, as well as talk of the impacts of the coronavirus on the energy industry and consumers, Murkowski told E&E News afterward.

"Obviously this kind of cuts both ways for the energy companies," she said. "This is really difficult for them if they get down in this much below where we are right now, in terms of the jobs. But when the price of oil goes down there are benefits to consumers, and the president kind of spoke to both sides of that."

Sen. John Hoeven (R-N.D.), whose state has been a leader in shale production, was not ready to get behind an aid package but rather called for focusing on diplomatic efforts to ease the oil price war.

"That could have a real positive impact that doesn’t cost us anything," he said. "It’s just getting our allies to work with us."

Asked about assistance for oil companies, Senate Finance Chairman Chuck Grassley (R-Iowa) told E&E News that "there’s all kinds of things that are on the table."

Grassley added, "I think they feel that we better not take a chance, act quicker than later."

Senate Appropriations Chairman Richard Shelby (R-Ala.) did not rule out energy aid but said he used the luncheon meeting to urge the president to pursue an infrastructure bill to boost the economy.

The energy industry, meanwhile, shied away from backing a specific plan but acknowledged the recent impact of global events.

"Our goal is to work with our nation’s leaders on a solution that ensures American companies can continue to invest in and produce low-cost, reliable energy," said Anne Bradbury, the CEO of the American Exploration & Production Council, which represents some of the top independent producers of oil and natural gas in the U.S.

"We believe in the free market system and will advocate for policies that support a level playing field to address geopolitical manipulation of the market," Bradbury said.

A push for energy assistance would face resistance from Democrats who have said any economic package should focus on helping workers hurt by the virus and finding ways to speed up testing and treatment of the disease.

They insisted they would not back any deal that offered tax breaks or aid for special interests, including energy companies.

Grijalva specifically asked William Perry Pendley, the acting director of the Bureau of Land Management, who oversees energy leasing on federal lands and was appearing before lawmakers, if he would back the plan. Pendley said he was not aware of those discussions and refused to say whether he might support it.

Other Democrats saw openings to push their priorities in a stimulus package. House Transportation and Infrastructure Chairman Peter DeFazio (D-Ore.) said now would be an "ideal time" for an infrastructure package because interest rates on the federal bonds needed to finance the projects are at record lows.

He said the infrastructure projects could get started quickly if there were bipartisan agreement on the financing.

Rep. Paul Tonko (D-N.Y.) said assistance could go toward clean energy companies that are leaders in making investments to help combat climate change. "Let’s do this in an environmentally sensitive way," he said of any aid.

Lawmakers eyed their options as the virus continued to spread, topping more than 100,000 cases around the globe, including more than 4,000 deaths.

Virginia Rep. Don Beyer, a leading Democratic voice on climate issues, became the latest lawmaker to self-quarantine and close his office, saying he had recently dined with a friend who has been infected. Beyer said he has no symptoms and his prospects for becoming infected remain low.

Several other lawmakers remain under quarantine after interacting with an infected individual at the Conservative Political Action Conference in Maryland last month. None has tested positive for the coronavirus.

Congress has no plans to change its schedule even as a slew of public events are being canceled, including rallies last night for the leading Democratic presidential candidates, former Vice President Joe Biden and Vermont Sen. Bernie Sanders. Many companies are now encouraging employees to work from home if possible.

House Democratic Caucus Chairman Hakeem Jeffries of New York said yesterday, "It’s not my expectation that we will recess early or extend recess."

Both chambers are due to be home next week during a district work period.