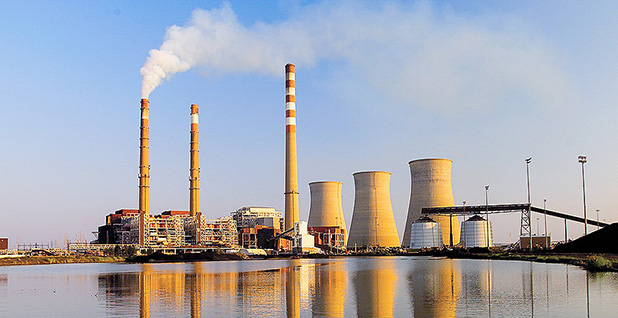 The Tennessee Valley Authority’s Paradise Fossil Plant in Kentucky is shown. President Trump took to Twitter to encourage TVA not to shut down the power plant, which had ties to one of his political supporters and donors, Murray Energy Corp. CEO Bob Murray. TVA Web Team/Wikimedia Commons

President Trump yesterday took a swipe at the Tennessee Valley Authority for threatening to shutter a coal-fired power plant that has direct ties to coal executive Bob Murray, a top political supporter and donor.

The president’s warning was met with support from Republicans and top Cabinet secretaries; pushback from environmental groups; and acknowledgement from TVA, a federally owned utility.

Senate Majority Leader Mitch McConnell (R-Ky.) also weighed in. "I agree Mr. President. #Coal is an affordable & reliable source of energy we can find right here in #Kentucky. It powers the lights in our homes & employs thousands of hardworking Kentuckians. Coal has helped fuel our country’s greatness & it needs to be part of our energy future," the senator tweeted.

Trump’s tweet arrived just days before TVA’s board could vote on the fate of its Paradise coal-fired power plant in Kentucky, a facility that is almost 5 decades old and obtained the bulk of its coal in 2017 from a mine in Muhlenberg County, Ky., operated by Murray, according to data from the U.S. Energy Information Administration.

TVA in a response to Trump tweeted, "Mr. President, coal is an important part of TVA’s power generation mix and we will give serious consideration to all factors as we make this decision."

Murray, CEO of Murray Energy Corp., is a staunch supporter of the president who has lobbied the administration for months to offer financial or policy lifelines to a slew of struggling coal plants. While those efforts — mainly driven through the Department of Energy — have so far failed, some expect the policy to be resuscitated given that Trump vowed to revive coal on the campaign trail.

TVA will also recommend to its board that it close the Bull Run plant in Tennessee. Both Bull Run and Paradise are single-unit coal plants, but TVA now operates a new natural gas combined-cycle plant at the Paradise site.

The results follow an environmental assessment, which TVA must do under the National Environmental Policy Act. But TVA also reviewed the plants’ economics, transmission reliability and fuel supply, spokesman Jim Hopson said.

"All of those different factors are being made available to the board," he said.

The board could vote as early as Thursday, but Hopson said members could agree to delay their deliberations.

"Ultimately it’s their decision to make," he said.

Trump appointed four of the seven members to TVA’s board. A Senate panel recently confirmed a Memphis, Tenn., attorney to fill one of the vacancies, and one remains open.

The results that point to TVA’s recommendation are in line with nationwide trends for the electricity industry. Economics are pushing coal out of favor as natural gas and renewable energy are rising to take its place.

Indeed, TVA has shut down more than half of its coal fleet as the utility has shifted to natural gas, nuclear and some renewables. The move has cut its carbon emissions in half from 2005 levels, and executives have said that figure is likely to go to 60 percent in the coming years.

What’s more, Paradise and Bull Run are first up in an economic review of TVA’s fleet, something outgoing CEO Bill Johnson announced in August.

"We have a significantly large and elderly [combustion turbine] fleet," Johnson said last November. "I guess everybody’s got an elderly and large CT fleet."

Baseload fossil plants like Paradise and Bull Run were top of the line when they were designed in the 1950s and 1960s. But such aging power plants are unable to adjust their power output as well as demand fluctuates during the day.

This means if utilities decide to run those power plants, they wind up generating a lot of electricity that isn’t needed. On the other hand, deciding to turn them on and off when the load fluctuates only creates more maintenance.

"All of the utilities are looking at the new reality of the changing load demand curves," Hopson said. "As more and more individuals want us to add additional renewables, it increases the need for flexible generating sources, sources that will help us backfill that intermittent nature."

The agency also is in the middle of updating its long-term energy plan. TVA is expected to release a draft version of that energy road map soon. Besides a drop in electricity demand, a desire to incorporate energy technologies on the grid is another chief reasons for a new road map. Long-term projections show that the federal utility, which serves seven states across the Southeast, will lose roughly 12 percent of its load between 2007 and 2027.

Like the rest of the utility industry, TVA is grappling with changing market forces, new technologies and different consumer behavior. It also faces pressure from clean energy advocates to fully cut coal from its generation fleet and emphasize renewables and energy efficiency instead.