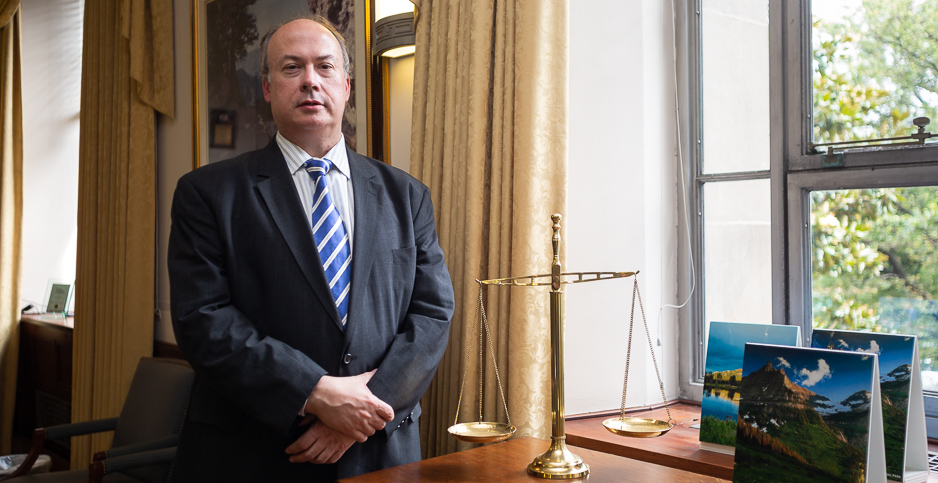 The Trump administration today took its latest swing against California and the state’s efforts to address climate change.

A Justice Department complaint says California’s 2017 deal with the Canadian province of Quebec to limit greenhouse gas releases and set an emissions market constitutes an "independent foreign policy" in violation of federal law.

"The state of California has veered outside of its proper constitutional lane to enter into an international emissions agreement," Jeffrey Bossert Clark, head of DOJ’s environment division, said in a statement this morning.

"The power to enter into such agreements is reserved to the federal government, which must be able to speak with one voice in the area of U.S. foreign policy," he said.

DOJ’s challenge follows the Trump administration’s move last month to strip California of its ability to craft clean car standards that are stronger than federal rules.

In a recent interview with E&E News, California Attorney General Xavier Becerra (D) estimated he has initiated efforts to lock horns with the Trump administration in court about 62 times (Greenwire, Sept. 27).

"The White House is yet again continuing its political vendetta against California, our climate policies and the health of our communities," California Gov. Gavin Newsom (D) said in a statement today.

"Carbon pollution knows no borders, and the Trump administration’s abysmal record of denying climate change and propping up big polluters makes cross-border collaboration all the more necessary," he said.

In its lawsuit on the state’s cap-and-trade program, filed earlier today in the U.S. District Court for the Eastern District of California, DOJ cautioned that California’s agreement with Quebec could push other states to broker "similarly illegal" schemes.

But the claims DOJ raised appeared to be more of an attempt to punish California than to enforce the Constitution, said Avi Zevin, an attorney for New York University School of Law’s Institute for Policy Integrity.

He noted that the complaint lists a 2006 statement by then-Gov. Arnold Schwarzenegger (R) that California was its own "nation state" that was the "modern equivalent of the ancient city-states of Athens and Sparta."

"They’re trying to make too much out of those press statements," Zevin said of DOJ.

He said the government raised "dubious arguments," including a claim that California’s deal with Quebec constituted an "emissions treaty" of the nature that the nation’s highest bench said in the case Massachusetts v. EPA individual states cannot enter.

If DOJ is successful, Zevin added, a favorable ruling for the government would only hamstring California’s agreement with Quebec.

"Even if this were to win, which I don’t expect it to, that wouldn’t eliminate the program," he said. "It would have a relatively limited effect."

‘Surprised it took them so long’

He said California could raise arguments that the state made an agreement not with Canada but with Quebec, a jurisdiction within the country, and therefore did not negotiate a nation-to-nation deal.

"I’m surprised it took them so long to bring this case," Holmstead said. "When California started negotiating with Quebec, there was some attention paid to the issue."

"It’s likely they would have filed this regardless because it’s another opportunity for them to say California should be put in check," he said.

California won’t be surprised by the lawsuit, Poloncarz said, noting that the state’s agreement with Quebec "by no means looks and feels like a treaty."

Lawyers for the California Air Resources Board "foresaw these issues and crafted the cap-and-trade [memorandum of understanding] with Quebec to dodge them," Michael Wara, a Stanford University professor, wrote on Twitter today. "The specific wording is designed to sidestep many of the issues raised in the DOJ complaint.

"Ultimately, what really matters is how the market responds," he continued. "Does the lawsuit undermine confidence in California’s cap-and-trade (it shouldn’t). Does it reduce interest in purchasing emissions allowances at the auctions (it shouldn’t). Only time will tell but time is on CA’s side."

Defendants in the lawsuit include Newsom, the California Air Resources Board and the Western Climate Initiative, a nonprofit that administers emissions trading between California and Quebec.