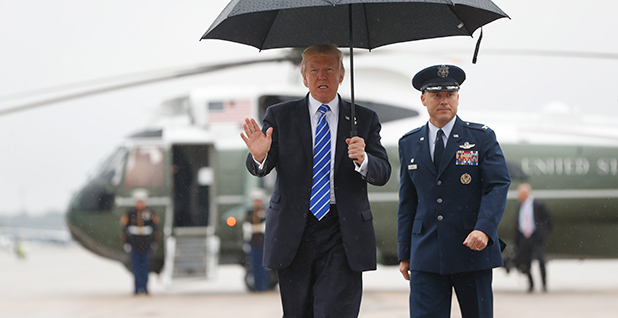 President Trump cheered the North Dakota energy "miracle" yesterday as he delivered broad outlines for overhauling the federal tax code while seeking to soothe state residents in the grip of a prolonged drought.

His comments at an oil refinery just west of Bismarck underscore the resistless pull that natural disasters are having on Trump’s presidency. Yesterday marked the third time in 10 days that he’s addressed those who are suffering from the impacts of natural disasters, and he stands to have another chance soon with Hurricane Irma hurtling toward Florida’s coastline.

Fresh off a weekend visit to the Gulf Coast to meet with first responders and residents grappling with the aftermath of Hurricane Harvey, Trump told the North Dakota crowd, "I know you have a little bit of a drought. They had the opposite. Believe me, you’re better off."

Trump added that he told North Dakota Gov. Doug Burgum (R), "I didn’t know you have droughts this far north, but, guess what, you have them."

Trump’s visit to North Dakota was designed to provide a backdrop for a campaign-style pitch to overhaul the tax code. The changes would enable American companies to achieve the same success as energy firms fueling the Roughrider State’s buoyant economy.

Trump slammed environmental regulations as a burden on industry and said his administration’s priorities, like "refocusing" U.S. EPA toward "crystal-clean air and water," exiting the Paris climate accord and lifting oil and gas extraction restrictions, would help other states approach North Dakota’s 2.2 percent unemployment rate, the lowest in the nation.

"You understand the vital truth — that Washington has no right to shut down energy production, because American wealth doesn’t belong to the government," Trump said. "It belongs to the people."

The stop in North Dakota was a happy return trip for Trump. The state supported him in the presidential election by a margin of 63 percent. It’s also where Trump uncorked his first major energy speech of the 2016 campaign, in which he championed oil, coal and gas while criticizing "very expensive" solar and wind for "killing all of the eagles."

But the nation’s mounting natural disasters were never far from sight. Flooding caused by Hurricane Harvey, the first Category 3 or higher storm to make landfall in 12 years, stands to test the administration’s handling of disaster aid and cleanup for months to come. And Hurricane Irma could multiply the challenges facing Trump by barreling through the Caribbean as a deadly Category 5 storm headed toward the densely developed coastlines of South Florida.

Trump also acknowledged the severity of North Dakota’s drought, noting that he had spoken with Agriculture Secretary Sonny Perdue about the dry conditions affecting large parts of the West. That dryness is intensifying the risk of wildfire across a number of states.

In North Dakota, nearly the whole state is abnormally dry, and more than 62 percent of it has experienced at least moderate drought since the week of Aug. 22, according the U.S. Drought Monitor.

"I also want to tell the people of North Dakota and the Western states who are feeling the pain of the devastating drought that we are with you 100 percent," Trump said outside the refinery, owned by Andeavor, to a crowd of energy workers.

Many of the policies pursued by the Trump administration could increase greenhouse gas emissions that drive climate change, critics contend.

"If Trump were truly serious about saving the American taxpayers money and protecting their clean air and water, he would end the more than $20 billion in subsidies forked over to corporate polluters every year and uphold life saving environmental safeguards," Melinda Pierce, legislative director for the Sierra Club, said in a statement.