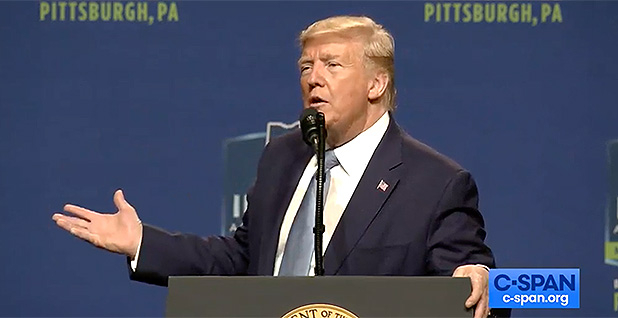 President Trump touted his administration’s embrace of the fossil fuel industry yesterday, warning in a speech in battleground Pennsylvania that his Democratic opponents would roll it all back.

"If the other people ever get in," Trump said at the ninth annual Shale Insight conference in Pittsburgh, "you’ll all be out of business very quickly."

Trump’s remarks to an event put on by the Marcellus Shale Coalition, a group of natural gas companies based in Pennsylvania, Ohio and West Virginia, resembled a campaign stump speech as much as an official appearance.

He mentioned his administration’s rollback of his predecessor’s "ridiculous" environmental regulations, took credit for record U.S. energy production, praised actions such as moving toward Arctic National Wildlife Refuge drilling and bashed the Paris climate accord. But he spent nearly as much time criticizing congressional Democrats, those running for president and his vanquished 2016 Democratic presidential rival Hillary Clinton. He also took aim at Louisiana Gov. John Bel Edwards, a Democrat, and Rep. Conor Lamb, a Pittsburgh-area Democrat who won office despite Trump campaigning for his opponent.

At one point, he brought three local people to the stage to attest to the administration’s effect on the area.

"You’ll never have another president like me," he promised the crowd. "I understand what you go through."

Trump pledged that the administration was working to speed up approval of pipelines in Texas, saying it would boost oil production and further outpace both Saudi Arabia and Russia. Environmentalists have pointed out that Texas pipelines are regulated by the state, not the federal government (Energywire, June 24).

But he warned that "many politicians are targeting your industry and your jobs for literally total destruction."

He mused whether it was "stupidity" or "evil" that was prompting "every leading Democrat" to pledge to eliminate fossil fuels.

"These Democrat plans would obliterate millions of American jobs, devastating communities across Pennsylvania and bankrupting families all across the nation," he said, decrying "anti-energy zealots."

The appearance gave the embattled president a respite from the swirling impeachment inquiry launched by congressional Democrats, and he largely steered clear of the subject.

He dismissed the House impeachment investigation into whether he pressured Ukraine officials to investigate his political rivals as a witch hunt.

"I have witch hunts every week," Trump said. "I say, ‘What’s the witch hunt this week?’"

‘I never heard the word Biden’

Trump traveled to Pennsylvania with outgoing Energy Secretary Rick Perry, who has refused to comply with a congressional subpoena seeking information about his participation in the administration’s dealing with Ukraine (E&E Daily, Oct. 21).

Perry in a radio interview earlier in the day said that he and other Trump administration officials urged Ukrainian officials to tackle corruption, but he denied that it involved seeking dirt on Trump’s political opponents.

Perry, in the interview with radio talk show host Hugh Hewitt, also said he’d never heard Trump or any other administration official mention former Vice President Joe Biden, despite a whistleblower’s complaint that Trump tried to pressure the Ukrainian government to investigate the role of Biden’s son in a Ukraine energy company.

"I never heard the word Biden mentioned, not from him, not from staff, not from the E.U. ambassador [Gordon Sondland], not from [former U.S. Special Representative for Ukraine] Kurt Volker," Perry said. "Never one time was that said."

Trump heaped praise on Perry at the event, joking that when he ran against the former Texas governor for president in 2016, "he was nasty" and a tough competitor. But, Trump added, when Perry "decided it was time to do something else, there was nobody who could’ve been nicer."

He called Perry, one of the longest-serving members of his original Cabinet, a "tremendous asset to the administration."

He "did a great job with the energy," Trump said.

Trump spoke to the same conference in 2016, a little more than a month before the presidential election, predicting then that he’d win the state. He won by less than a percentage point, becoming the first Republican to do since 1988.

And he told attendees yesterday that he had lived up to all his promises.

"You were under assault for a long period of time, but no longer, no longer," he said. "That’s why we have to keep it going. Because if you talk about assault, it was nothing compared to what would happen if one of these people got in office, what they would do to you would be unthinkable."

Pennsylvania is a crucial swing state with 20 electoral votes, and the visit is Trump’s second to the state since August, when he appeared at an ethane cracker plant under construction (Energywire, Aug. 14).

The Royal Dutch Shell PLC plant, which will "crack" gas molecules to create ethylene for plastics manufacturing, has been touted as an economic lifeline for the region, while environmental groups argue that the plant will cause air pollution.

Protesters disrupted his speech, and Trump joked that the crowd should not "hurt them. They don’t know they’re dealing with very tough people in this room."

Fracking bans and the Paris accord

Trump never mentioned any of his potential opponents by name, but his appearance comes as hydraulic fracturing is emerging as an issue in the 2020 presidential campaign.

Several of the 2020 Democratic presidential contenders have embraced efforts to ban fracking entirely — a departure from the party’s past support for the practice. Democrats have said such a ban is an important part of addressing climate change and curbing fossil fuel use.

More centrist candidates, including Biden, have declined to go that far.

Biden, who campaigned in his hometown of Scranton, Pa., hours before Trump arrived in the state, accused the president of catering to the wealthy.

"If you’re going to restore the middle class, we need to start to reward work again, not just wealth," Biden said.

He also criticized Trump for pulling out of the Paris climate change accord, saying the United States needs to "lead by example" to counter what Biden called "the greatest threat that we’ve ever seen to humanity."

Biden pledged that his first act as president would be to rejoin the accord and said he’d invite leaders of the 173 countries that have signed the pledge to Washington "to up the ante of what they promised to do and hold them accountable."

Biden didn’t mention fracking but said his plans would include cutting carbon "by an enormous amount" and making a "historic investment in clean energy research and technology."

Only 43% of Pennsylvania voters approved of his job performance in the September survey.

The same poll found him trailing the three leading Democratic candidates, though within the poll’s margin of error.

Trump was introduced by Harold Hamm, CEO of the oil and natural gas producer Continental Resources Inc., a vocal Trump supporter who advised him on energy matters during the 2016 campaign.