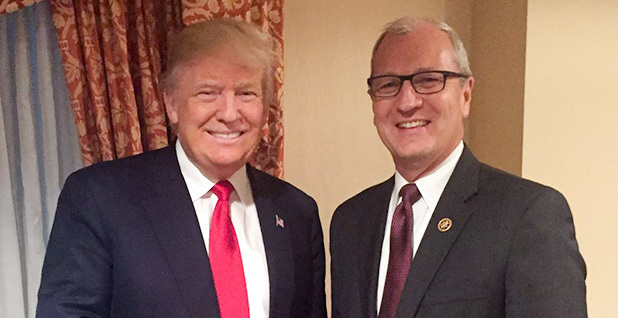 Rep. Kevin Cramer (right), who is advising presidential candidate Donald Trump on energy policy, said yesterday that he's relying on the almost 10 years he spent as a North Dakota energy regulator in drafting recommendations for the campaign, adding that he's received "lots of information" from outside groups and companies for consideration. Photo courtesy of Rep. Kevin Cramer via Facebook.

"Yes, I do believe that’s happening, and I’ve heard from a number of people that would be interested in participating at a staff level," Cramer said in an interview with E&E Daily. "And that would be a great relief by me because, as I always say, this is not my day job."

Cramer has been serving as an informal energy adviser to Trump for the past several weeks, and this week delivered four pages of his "thoughts" to the campaign, including rolling back multiple energy and environmental rules, and making changes to the tax code that would allow all energy sources to claim depreciations for production costs (Greenwire, May 19).

He told reporters yesterday that he’s had a great deal of feedback from parties interested in shaping the Trump energy agenda, but his views have been largely informed by his experiences as a top energy regulator in his home state for nearly a decade.

"[Nongovernmental organizations], think tanks in D.C., companies have all been feeding me lots of information," he said. "And I appreciate all of it, but what I’ve written at this point is based on my experience, and some of it is going to be consistent with the things that people have provided me."

Some of the ideas that he noted in his memo to the campaign are "not necessarily things I agree with 100 percent of the time," but were included to highlight an issue "that’s worth paying attention to."

Thomas Pyle, president of the free-market-based American Energy Alliance, said he’s been in contact with strategic consultants and surrogates for the Trump campaign to provide input on public lands issues, a carbon tax, U.S. EPA regulations, and oil and gas production on public lands.

Pyle, who said he’s familiar with a number of individuals on Trump’s campaign team, also said he’s mulling an endorsement, adding that Trump has been surprisingly consistent about his views on EPA regulation and the need to cut red tape, the carbon tax and public lands management.

"I’m feeling much better about Trump on energy and environmental issues than in other areas," Pyle said. "In fact, we’re seriously thinking about whether or not we’re going to endorse."

The same Trump strategists, he added, are reaching out to other like-minded groups in the free-market space.

The American Energy Alliance has been vocal in its opposition to a carbon tax and subsidies for wind and solar, and for its call to end a host of EPA regulations, including new ozone limits and the Clean Power Plan. The Obama administration, Pyle said, has been nimble and creative in giving wind and solar advantages, streamlining the permitting process and giving generous incidental take permits to kill eagles.

"But when it comes to oil and gas and coal, it’s a slow death march to get activities off the ground," he said.

Pyle said he’s keen on seeing the Interior Department operate more efficiently. He also said he offered policy advice to Trump’s strategists about mineral leasing, onshore and offshore production of energy, and how to better use public lands to benefit taxpayers.

Pyle said he’s been encouraged by Trump but wants more details — and he may just get them when the presidential candidate touches on energy issues in North Dakota, where he’s slated to deliver the keynote speech at the Williston Basin Petroleum Conference on May 26 (E&ENews PM, May 12).

"I’m quite encouraged by what I’ve seen, a thread of consistency in his awareness of the challenges with respect to the EPA and their carbon rules, with his concern about [the] Paris [climate deal], with his strong opposition to a carbon tax," he said. "I’m looking forward to this speech because maybe that will put some flesh [on the bone]."

Cramer has also received input from his congressional colleagues, who want to make sure the campaign understands the regional dynamics that affect policy.

"Some of the Westerners have been very communicative and want to make sure he has a unique understanding of some of the unique qualities of the West," Cramer said, noting that Trump is from New York.

Cramer said that all of the members who have endorsed Trump "have been tasked with proving policy meat based on their areas of expertise and their committee assignments."

While at least two of those members, Republican Reps. Renee Ellmers of North Carolina and Chris Collins of New York, are members of the Energy and Commerce Committee along with Cramer, he doesn’t know of anyone else "providing direct guidance" to Trump on energy.

At least two key GOP senators said yesterday they have not had any contact with the Trump campaign.

Environment and Public Works Chairman Jim Inhofe (R-Okla.), who last week said Trump should beef up expertise in the regulatory arena (E&ENews PM, May 12), told E&E Daily yesterday he’d like to talk to the campaign to discuss EPA regulations.

"I plan to do that," Inhofe said. "But I haven’t, and I’m sure he’s making contacts with people who he believes are more important than I am, and that’s just fine. But I would like to do that."

Inhofe added that he’s reached out to early Trump backer Sen. Jeff Sessions (R-Ala.) — who is a member of EPW — to express his interest in playing a role in shaping the Trump agenda.

"I told Jeff that as soon as the right time comes, I’d like to do that on the energy and the EPA issues," Inhofe said.

Senate Energy and Natural Resources Chairwoman Lisa Murkowski (R-Alaska) told E&E Daily yesterday that she has never met Cramer or heard anything from the Trump campaign. Murkowski has previously said she envisions helping shape the GOP’s energy platform, but said yesterday that she wasn’t sure exactly how that would unfold.

"I don’t know these things work, to be honest," she said. "I’ve never been chairman of a full committee when we had a presidential election. I guess I should find out."

House Agriculture Chairman Mike Conaway (R-Texas), who endorsed Trump last week, said he has reached out to the campaign to offer help in developing agriculture policies.

"Right now, I don’t have any idea what his ag policy might or might not be," Conaway said earlier this week. "We are trying to flush out where they are, and if they want our help, we’ll volunteer to pitch in."

Conaway said he has yet to hear from the Trump campaign.

Trump for his part has offered few specifics on agriculture policy. He has suggested there is fraud in the food stamp program, and his plan to deport millions of illegal Mexican immigrants, many of whom work in agriculture jobs, is being closely watched by the farming industry.

Conaway said he’s not bothered by a lack of specifics from Trump, noting agriculture issues rarely come up in debates.

Cramer said the Trump campaign is racing to catch up on policy after being caught off-guard by the decision by his last two GOP opponents, Texas Sen. Ted Cruz and Ohio Gov. John Kasich, to drop out of the race earlier this month.

"The campaign wasn’t quite ready for this moment, in fairness," he said. "They thought for sure they’d still have another month of primary mode to be in, and clearly they didn’t suddenly. So I think they continue to gear up."

Asked if he expected any of his own staff to leave for the campaign, Cramer laughed.

"They better not," he said, adding, "I’d let them work at night. We haven’t talked about that internally."

Murkowski said she was unaware whether anyone on her staff has been contacted by the Trump campaign but appeared taken aback by the notion of losing aides.

"Oh, gosh, I hope not," she said. "I need everybody. We’ve got an energy bill we’ve got to get through conference."