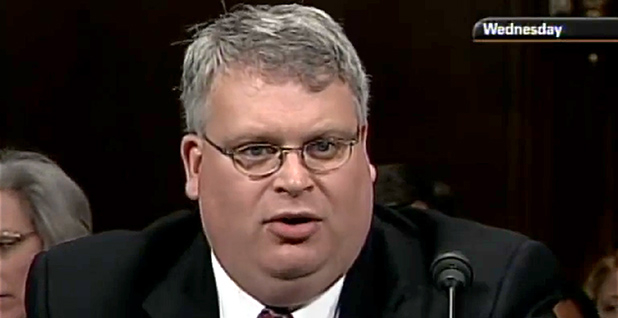 A North Dakota judge who’s a central figure in the court battles over the Obama administration’s contentious Clean Water Rule has been picked by President Trump to fill a vacant seat on the 8th U.S. Circuit Court of Appeals.

Judge Ralph Erickson of the U.S. District Court for the District of North Dakota got national attention in 2015 by blocking the rule from taking effect in 13 states.

More than a dozen states led by North Dakota had challenged the rule — also known as Waters of the U.S., or WOTUS, rule — in Erickson’s court.

"The risk of irreparable harm to the States is both imminent and likely," Erickson wrote in his August 2015 opinion granting a preliminary injunction.

Erickson, who’s been a judge on the district court since 2003, expressed gratitude for Trump’s nomination in a statement.

"I am extremely grateful to have had the opportunity to serve the people of the United States, and particularly North Dakota, as a judge over the past 23 years," Erickson said. "I am humbled and honored by the confidence that President Donald J. Trump has shown in me and if confirmed I will do my utmost to faithfully perform my duties as an appellate judge."

Erickson was appointed to the district court by President George W. Bush and is known for a strict constructionist view of the Constitution. He’s a former personal injury lawyer, magistrate judge and state trial judge.

Born in Thief River Falls, Minn., he grew up in Rugby, a small town in central North Dakota. He attended Jamestown College in North Dakota and then the University of North Dakota School of Law.

Prior to the Clean Water Rule litigation, Erickson was known mostly for a high-profile case in which he imposed the first death penalty in North Dakota since 1913. The case involved the 2003 murder of a University of North Dakota student (Greenwire, Nov. 11, 2015).

Erickson’s decision to block the water rule complicated an already complex legal battle over the regulation.

The joint U.S. EPA-Army Corps of Engineers rule was intended to clarify which wetlands and streams receive automatic protection under the Clean Water Act, but it sparked anger among farmers, developers and a range of industry groups.

Dozens of parties challenged the rule in federal district and appellate courts.

With his August 2015 opinion, Erickson became the only district court judge to assert jurisdiction over the case and to grant an injunction blocking the rule in Alaska, Arizona, Arkansas, Colorado, Idaho, Missouri, Montana, Nebraska, Nevada, New Mexico, North Dakota, South Dakota and Wyoming.

But he declined to issue a nationwide halt of the rule.

"The Rule," Erickson wrote, "allows EPA regulation of waters that do not bear any effect on the ‘chemical, physical, and biological integrity’ of any navigable-in-fact water" (Greenwire, Aug. 27, 2015).

The 6th U.S. Circuit Court of Appeals, though, agreed to halt the rule nationwide and in February 2016 issued a split 2-1 opinion finding it had jurisdiction to hear the challenges. Erickson decided to halt proceedings in his court while the litigation played out in the appeals court (Greenwire, May 25, 2016).

The 6th Circuit’s jurisdiction decision was a victory for the Obama administration, which had pushed to keep challenges in appellate courts, rather than district courts where local judges may be more sympathetic to critics’ concerns.

The Supreme Court has since agreed to take up the dispute over which court is the correct venue for challenges to the rule.

Industry groups, states and environmentalists have all asked justices to return the litigation to local district courts (Greenwire, May 2).

Outside of the courts, the Trump administration is moving forward with a plan to rescind and replace the Clean Water Rule. The White House Office of Information and Regulatory Affairs is currently reviewing a proposal by EPA and the Army Corps to roll back President Obama’s policy.

The agencies plan to revert to a 1986 regulation and 2008 guidance to define "waters of the United States" while they work on a replacement rule (Greenwire, May 31).

Erickson "has upheld the rule of law and shown deep respect for the Constitution," Republican Sen. John Hoeven said in a statement.

And Democratic Sen. Heidi Heitkamp, a leading critic of WOTUS among Democrats, likewise said she would support Erickson’s nomination in the Senate.

"Judge Erickson has proven through his decades of experience, record of impartiality, and devotion to his work that he is a judicious and thoughtful lawyer who continues to follow the rule of law," Heitkamp said in a statement. "I have known Judge Erickson for many years and he has a reputation for fairness and independence."