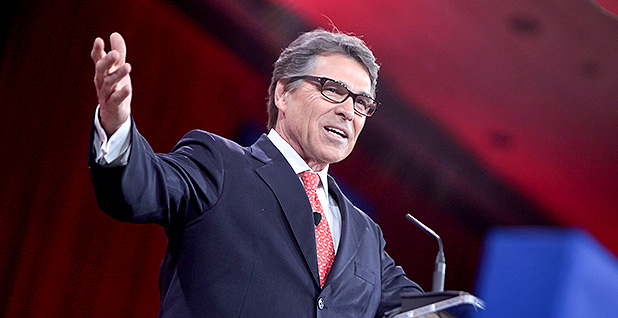 When Texas was enduring thousands of wildfires and extreme drought in 2011 that scientists said was amplified by global warming, then-Gov. Rick Perry (R) never once mentioned climate change.

Instead, he called for an official three days of prayer. The drought worsened. Major rains didn’t come for another 170 days.

Of all of President-elect Donald Trump’s picks to run energy and environment agencies, Perry has been the loudest critic of climate science. He proudly opposes action to limit greenhouse gas emissions. Despite the impacts he has witnessed in his own coastal state, including sea-level rise and alternating droughts and heavy rains that research says are amplified by global warming, Perry believes "there are a substantial number of scientists who have manipulated data so that they will have dollars rolling into their projects."

"I think we are seeing almost weekly or even daily scientists are coming forward and questioning the original idea that man-made global warming is what is causing the climate to change," he said while campaigning for the Republican presidential nomination in New Hampshire in 2011. "Yes, our climate’s changed; they’ve been changing ever since the Earth was born."

At the debate that year, he said "the science is not settled," and acting on it would jeopardize the U.S. economy.

"The complexities of the global atmosphere have often eluded the most sophisticated scientists," he concluded in his book, "Fed Up!"

At the same time, during Perry’s governorship from 2000 to 2015, Texas became the top U.S. producer of both wind power and natural gas. Rich resources, low taxes and limited regulation drew the industries to the state. A massive state government effort to expand power lines spurred the unprecedented wind growth (see related story).

Trump this morning formally announced his intention to nominate Perry to be the nation’s next secretary of the Department of Energy, calling him "of the most successful governors in modern history." Perry, Trump said, "led Texas through a sustained period of economic growth and prosperity by developing the state’s energy resources and infrastructure, and making low-cost energy available to companies and families."

"My administration is going to make sure we take advantage of our huge natural resource deposits to make America energy independent and create vast new wealth for our nation, and Rick Perry is going to do an amazing job as the leader of that process," Trump said.

Perry in a statement said, "I know American energy is critical to our economy and our security. I look forward to engaging in a conversation about the development, stewardship and regulation of our energy resources, safeguarding our nuclear arsenal, and promoting an American energy policy that creates jobs and puts America first."

"Rick Perry has made loud and clear that he’s a climate change denier and doesn’t think that the federal government should ensure that every American has access to clean air, land or water," said a statement from the Democratic National Committee.

But how much can Perry’s stances on the environment really shift policies at DOE? Examining the agency’s funding priorities is helpful for context. DOE spends most of its money on nuclear weapons activities and waste cleanup and basic science. Only about 20 percent of its budget goes to electricity issues like fossil fuels and renewable power, noted Miles Keogh, research director for the National Association of Regulatory Utility Commissioners.

Experts say that although DOE doesn’t spend most of its money or time on climate change, small efforts Perry could undo could have a ripple effect. Current Energy Secretary Ernest Moniz frequently appeared at international conferences to promote climate work. DOE scientists have worked with others from around the world to calculate overall carbon reduction targets. The agency helps to figure out the "social cost of carbon," an official estimate of how much carbon dioxide emissions affect the public. That work could get lost if Perry de-emphasizes climate change and if Trump’s team fulfills early expectations that it might target federal employees who have worked on climate issues (Greenwire, Dec. 12).

If Perry ignores or dismisses the agency’s current climate work, he could miss out on a huge diplomatic opportunity, said Jonathan Levy, formerly the deputy chief of staff to Moniz.

"The moral authority you can have, and the work the secretary can do in setting the vision and talking about climate engagement on an international level and on a state level, gives the country the opportunity to take advantage of this trillion-dollar market for clean energy as the rest of the world moves toward a low-carbon future," said Levy, now director of policy and strategy at Vision Ridge Partners LLC.

Whither clean energy under Perry?

As a Gulf Coast state with energy operations up and down the coastline, Texas faces threats from rising oceans as climate change melts ice sheets.

In 2011, Perry’s appointees reportedly removed all mentions of climate change in a report on sea-level rise in Galveston Bay, according to Mother Jones.

Simon Nicholson, director of the Global Environmental Politics program at American University, said Perry could prevent DOE employees from talking about climate change in the same way the George W. Bush administration did.

He said that under Bush, "even basic scientific findings couldn’t come out without a political thumbprint," and reports had large sections redacted or words and phrases changed.

Nicholson pointed to news stories from The New York Times and The Washington Post that reported that the Bush administration softened greenhouse gas links to climate change and let oil and gas industry chiefs sway policy.

Perry could also affect how much the agency focuses research on bringing cheaper renewable power technologies to market, although that will also depend on budgets approved by Congress and Trump.

DOE spends about $2 billion per year now on research and development in renewable energy and energy efficiency.

Research will continue, and "outside of government, the technology curves and the costs have come down so that in a lot of markets you’re at cost parity or better, and you’re going to see the private markets continuing to deploy," Levy said.

A study last week from the University of Texas, Austin, for example, showed that when all costs and subsidies are considered, natural gas and wind power are the cheapest electricity sources in most parts of the country.

"The biggest question in my mind is: Does the Trump administration want to take advantage of the opportunities to deploy through DOE or not? What do they want to do with technology transfer and commercialization of ideas out of the national labs? Do they want to take advantage of the loan guarantee program that is responsible for paving the way for the utility-scale [photovoltaic solar] market in this country, or do they want to sit on the sidelines and basically have the private sector do all the heavy lifting ourselves?" Levy said.

Renewable advocates say they don’t see why Trump’s team would want to cut that research or other incentives, because green power creates jobs and economic growth. They expect the industries to expand even without as much federal support.

"We don’t see any reason why anyone would want to make renewables or solar less competitive, given the market stretch right now," said Dan Whitten, a spokesman for the Solar Energy Industries Association. "The amount of investment in solar is increasing dramatically. … There’s really no benefit to putting a stop to that growth."

Experts familiar with DOE suggest that as secretary, it would be difficult for Perry to incentivize oil and gas or coal development. The better position for that would be at the Interior Department or U.S. EPA. DOE could provide loan guarantees for nuclear power or carbon capture projects, but only if the agency is certain those projects would pay back the loans. Economics would have a bigger impact on those industries.

Basic science research at DOE could help a number of industries. For example, Keogh explained, the agency studies membrane technologies that might allow the passage of oxygen but not carbon dioxide. Those could be useful for carbon capture for fossil fuels but also for reducing the cost of creating various chemicals. Multipurpose programs might not be on the chopping block.

Critics of Perry have also suggested he might just not have the experience or knowledge to run the agency.

As governor and when he ran for president, Perry has never come across as the most polished of politicians.

"Rick Perry was on ‘Dancing with the Stars.’ I can’t really take him seriously after watching him rap with Vanilla Ice," noted climate activist Jane Kleeb, who has led a grass-roots push against oil and gas infrastructure.

In a famous "oops" moment, Perry forgot the name of the Department of Energy during a primary debate while listing the three federal agencies he would eliminate.

Keogh said it may be easy to underestimate Perry, though.

"I think people have pointed at his stumble in the election and sort of said, ‘Well, that means he doesn’t know anything about energy,’" Keogh said. "But to be a governor, you’ve got to be a really smart guy. You can’t just fake that."

Plus, Perry was a governor of an energy-oriented state that is also an island on the electric grid. It hardly connects by power lines to other regions, making it an "ain’t-no-cavalry-coming-over-the-hill kind of state," Keogh noted. Energy planning is critical there.

"You’re not coming into this without an understanding of the difference between a kilowatt and a kilowatt-hour," he said.