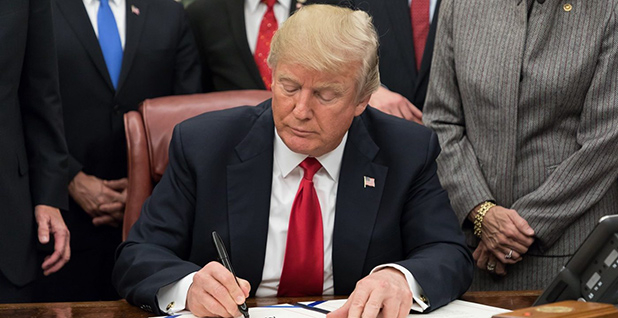 Fulfilling a campaign promise to his political base, President Trump said he will hit U.S. allies and rivals with tough tariffs next week on steel and aluminum imports, risking disruptions to energy and other industries at home and escalating trade conflicts abroad.

"Twenty-five percent for steel," Trump said, pinpointing the level of tariff charges he will impose as penalties for what he says is grossly unfair trading practices by China and other nations. "It will be 10 percent for aluminum," he told 15 executives of U.S.-based steel and aluminum producers. "We’ll be signing it next week."

The cross-cutting impact of his long-anticipated actions was immediately reflected in the stock market, with the Dow Jones Industrial Average dropping more than 500 points initially before settling down 420 points, or 1.7 percent. The Dow average has lost more than 1,000 points in the week as the president’s trade offensive added to investor concerns over future interest rate increases.

It was a cheering session inside the White House in Trump’s meeting with steel and aluminum executives. David Burritt, president and CEO of U.S. Steel Corp., said: "We believe that the leadership that this administration has shown on tax reform is simply outstanding. The elimination of bureaucracy is simply outstanding. We trust your judgment on this issue."

But interests across the oil and gas spectrum were quick to call foul.

"We are urging the administration to avoid killing U.S. jobs through a steel tariff that impacts pipelines," said Andy Black, president and CEO of the Association of Oil Pipe Lines (AOPL).

Trump’s commitment to get tough on trade had split the top ranks of his administration, with Commerce Secretary Wilbur Ross supporting restrictions against a pushback from officials concerned about damaging consequences, led by Trump’s chief economic adviser, Gary Cohn.

"You have a president who tends toward the extreme option," said William Reinsch, former president of the National Foreign Trade Council and a former trade official in the Commerce Department. "They fought it out. And this is what the president decided," added Reinsch, now with the Center for Strategic and International Studies.

"In our view, action on steel would underscore an already visible uptick in White House economic nationalism," commented the research firm ClearView Energy Partners, just prior to the president’s announcement.

The protest from the liquefied natural gas sector — a cornerstone of Trump’s "America First" energy campaign — highlighted a conflict of a different kind.

New LNG export terminals, chock-full of steel, "benefit the economy, create jobs, improve our trade deficit and provide global environmental benefits. The administration had taken meaningful steps to improve the current permit review process for natural gas infrastructure and it would be unfortunate if their steel tariffs created new and different barriers to projects," the Center for LNG said yesterday.

Likewise, higher steel prices would raise the cost of a major U.S. investment in infrastructure, just as Congress ponders where that money is coming from.

"Steel plays a ubiquitous role within oil and gas production. The upstream oil and gas sector imports steel pipe used for drilling, processing, gathering and transporting oil, gas and natural gas liquids. The midstream segment of the industry relies on imported pipe and fittings for oil, gas and products transportation infrastructure. The U.S. imports significant volumes of pipe for a variety of energy and non-energy applications," ClearView Energy Partners noted.

Next week’s action could set off a chain reaction of still unclear dimensions, with likely counterblows by China and other nations, lawsuits against the administration, and complaints to the World Trade Organization by tariff-targeted nations, trade experts said.

"Foreigners get very upset, and they retaliate" when the U.S. moves, Reinsch said. "The smart ones pick not steel [for retaliation], but sectors that maximize political pain in the U.S.," including agriculture and aircraft manufacturing.

"The normal short-term impact is panic; there is an immediately price hike," he added. "Then we potentially spiral downward into a trade war, or our president doesn’t react to the retaliation and decides to take it, and we have a new equilibrium, with more protection to steel."

A study commissioned by the U.S. pipeline group last year, shortly after Trump proposed a "buy American" requirement for pipeline projects, laid out potential impacts on the industry. The oil group says that if tariffs translated to a 25 percent increase in cost for pipes, the budget impact on projects could run from tens of millions of dollars for smaller projects to $300 million for the biggest proposals.

AOPL describes pipeline steel — which must be particularly high grade to reduce the chance of cracking — as a specialty product only available from a handful of U.S.-based plants. If those facilities were the only ones supplying the industry, the group says, the result could be wait times of one to two years to fill orders, potentially leading to delays or cancellation of pipeline projects.

The administration envisions tariffs as bringing new manufacturing facilities online in response to an overload of demand on U.S. fabricators. While supply could be pinched in the short term and have an impact on the pipeline industry and its construction jobs, Trump said yesterday that once tariffs bite into steel imports, "you’re going to see a lot of good things happen. You’re going to see expansions of the companies."

"Our operations and ongoing maintenance of the natural gas delivery system can be severely impacted if the required materials are not readily available," said American Gas Association President and CEO Dave McCurdy in a statement.

"Our industry has identified a number of specific challenges with obtaining some pipeline materials and equipment that are American made," McCurdy added. "Some pipelines, specifically low-pressure lines, can be replaced with plastic. Almost all of our nation’s natural gas plastic pipe is made in the U.S.

"Larger diameter, high-pressure pipelines that carry higher volumes of gas across longer distances, and their components, are typically made of steel," he added. "Additionally, many parts of our industry rely on steel valves that are not currently made in the United States."

The Center for LNG, which speaks for LNG producers, expressed similar concern that higher steel prices could raise the already high cost to build a new LNG export terminal or any dedicated pipelines that feed it, potentially jeopardizing new project commitments.

"These projects benefit the economy, create jobs, improve our trade deficit and provide global environmental benefits. The Administration had taken meaningful steps to improve the current permit review process for natural gas infrastructure and it would be unfortunate if their steel tariffs created new and different barriers to projects," the group said yesterday.

Daphne Magnuson, a spokeswoman for the LNG group, said CLNG has also expressed concern to the administration about the potential for unintended consequences on LNG trade. China has received a number of cargoes of LNG from Cheniere Energy Inc.’s Sabine Pass LNG terminal in Louisiana, and the company recently announced a long-term supply agreement with China National Petroleum Corp. that marks the first such agreement between a member of the fledgling domestic LNG industry and that country.

Cheniere CEO Jack Fusco said last week that the deal was not the end of the company’s China ambitions (Energywire, Feb. 22).

‘They’ll strike back at us’

United Steelworkers President Leo Gerard saluted Trump’s action. "The economy has grown, but the U.S. steel industry continues to fight a barrage of foreign steel products," he said. "Most of the growth in our market is going to imports — not to our own steel mills and steelworkers."

Rufus Yerxa, a former U.S. trade negotiator who heads the National Foreign Trade Council, spoke for steel users. "These are massive tariff hikes, and they are going to raise costs for many of our world-class industries like autos, machinery and equipment, oil and gas, and construction," Yerxa said. "These are all huge sectors of the economy, and the negative impacts on them will surely outweigh any benefits to the steel and aluminum industries."

Among the groups that were not so eager to speak about the tariff threat: environmental opponents of pipelines, whose side could be helped by tariff-related project delays and cancellations.

While China appears to be the key target of Trump’s trade aggression, the network of steel product manufacturers that have been importing cheap Chinese steel and converting it into products for the U.S. market will also be hit.

ClearView Energy Partners points to a side benefit for the administration in the trade hit: Three of the top exporters of energy-related steel products to the U.S. are Canada, Mexico and South Korea, all of which are currently involved in trade pact renegotiations.

"Action on steel could give President Trump and [U.S. Trade Representative] Robert Lighthizer a trade ‘two-fer,’" the group said. "Steel tariffs or quotas could remind Canadian, Mexican or Korean counterparties to renegotiations of White House willingness to act."

Reinsch, the former trade council president, said there is an outside chance that Trump, in forcing the issue, would take the long-standing issue of China’s overproduction of steel in a new direction.

"If South Korea, Japan and other countries respond to do the same thing to the Chinese — to focus on the problem — that might actually be a good thing, then the Chinese are going to have to eat all the steel" they pour into global markets to maintain domestic employment, Reinsch said. "It was their problem in the first place, and this would prevent them from exporting it.

"They odds are they won’t. They’ll strike back at us," he said.